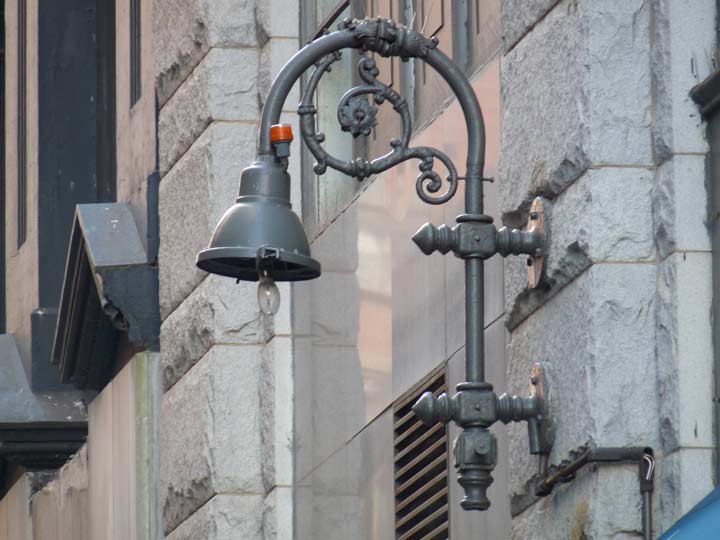 A couple of years ago I obtained my best photo yet of the wall-mounted Bishop Crook mast located on the Nassau Street side of the former New York Times building fronting on Park Row and Beekman Street.

There are still a number of classic wall-mounted streetlamps in New York City installed in the first few decades of the 20th Century, though one or two seems to disappear every year. Most are in the form of lengthy “Type G” Corvington masts and are used in truck loading zones when the city didn’t want to place conventional curbside lampposts and make them vulnerable to being attacked by trucks backing into loading zones or garages. Other wall brackets are used where sidewalks are narrow and the city, again, did not want to make traditional curbside lampposts vulnerable.

This seems to be the only remaining Bishop Crook wall bracket lamp. I do not know if it still works, though the presence of a photocell indicates that it once did, if it doesn’t now. In my memory the glass diffuser bowl has not been present.

While I have not been around the City much since I retired,it seems that the contract to replace the
teardrop hps luminaires with led is pretty much completed. Steinway street,Broadway and 30th ave were done in the last two months. If that bishops crook is a functioning light it should have been retrofitted with an led luminaire. It will be interesting to see if the workers install a photocontrol on the new light. The contracts are very specific about what work is to be done. Installing a photocontrol and receptacle is not included in the unit price for installing the luminaire.
A contract has been awarded to replace 1,000 hps and lps underpass lights.
April first is the start of bidding for what appears to be the last contract for the led conversion of NYC
street lights. It will cover the remaining hps park lamps and hps security flood lights.

They’re nothing if not obsessive.

Obsessive is the word indeed. I’m sure you recall the light on Steinway street in front of the former bar and restaurant Nickleodeon. I recall that the light was installed when the place opened. Somehow,they got hold of part of a bishops crook pole and buried the base in concrete. They even had a street sign made with the bars’ name on the pole. It was obviously not a City street light. But the crew installing the led teardrop luminaires placed one on this pole.

In older parts of many cities in Europe, wall mounted streetlamps are commonplace for the same reason – the narrowness of the sidewalks and streets. I did a double take the first time I saw such a streetlamp, but then realized that the streets themselves were probably centuries older than the advent of electric streetlamps.