ANOTHER TUNNEL TO NOWHERE 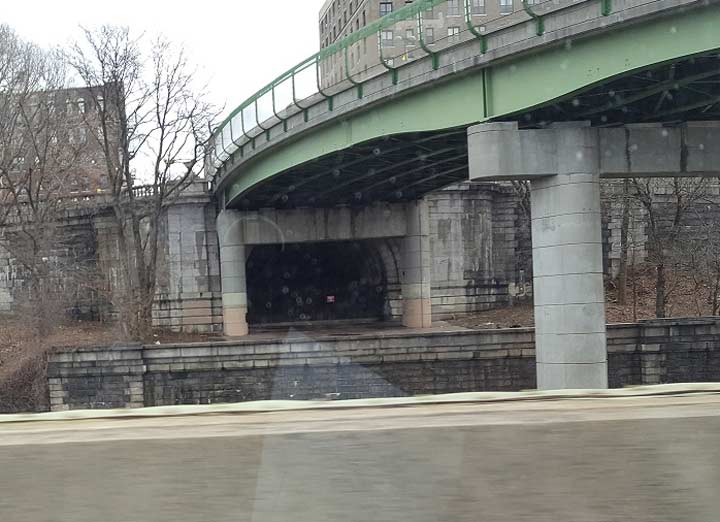 When driving north on the Henry Hudson Parkway past Riverbank State Park , it is easy to not notice a tunnel in the retaining wall of Riverside Drive beneath the 145th Street viaduct connecting to the state park. With an accident slowing down the flow, I quickly snapped a photo of the tunnel and returned home to research what appeared as a subterranean street beneath a surface street. 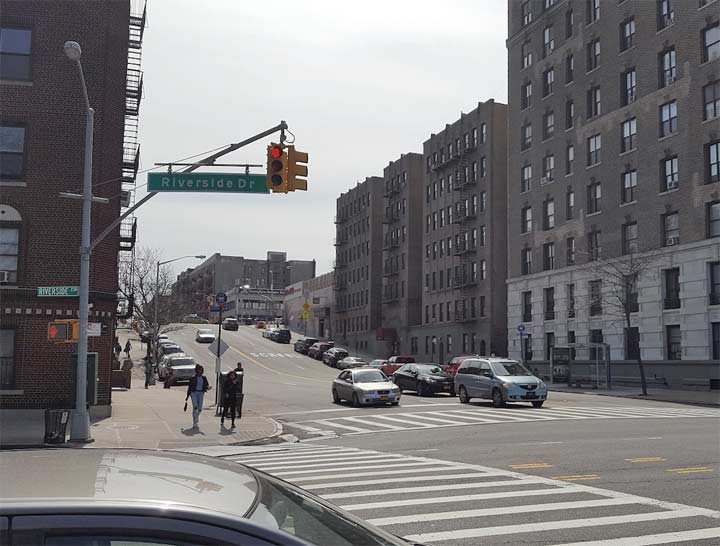 I assumed that the tunnel portal at 145th Street could be a former underpass before it was covered up in favor of an intersection for 145th Street and Riverside Drive. The apartment building on the southern side of this intersection is The Deerfield, built in 1913 as an uptown luxury residence. 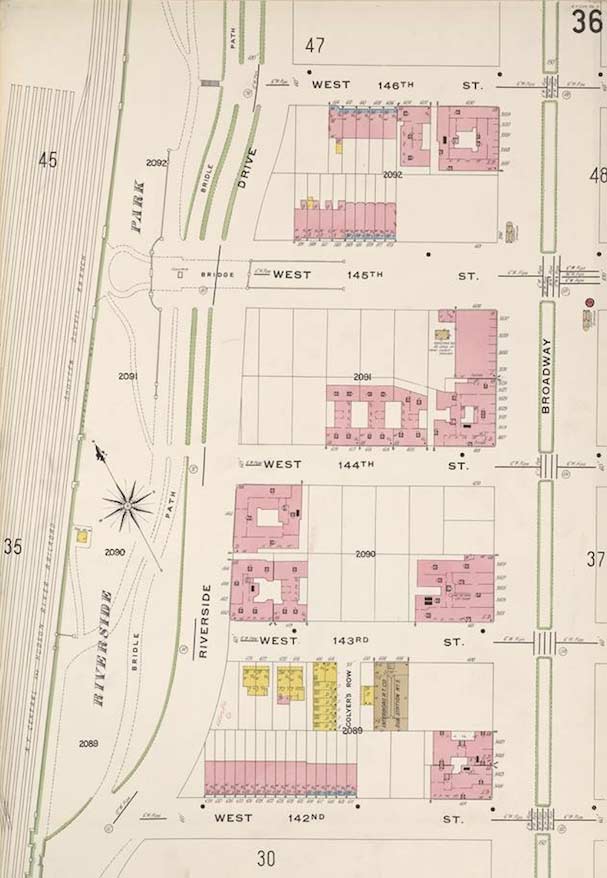 Forgotten-NY fan Mitch Paluszek provided the key evidence with a 1909 Sanborn Atlas plate of Hamilton Heights. Paluszek’s grandmother lived in this neighborhood. On the map, the two center lanes of 145th Street descend below Riverside Drive with a turnaround inside Riverside Park. While the section of the park along the Upper West Side and Morningside Heights was developed by Central Park designer Frederick Law Olmsted, the upper section of the park between 135th and 155th Streets was completed in 1902 under F. Stuart Williamson. His design included the famous viaduct across Manhattanville, castle-like retaining walls and grand entry stairs descending to the river. The tunnel at 145th Street and the balcony-like overlook above it were the work of Williamson.

Unrelated to this topic but also appearing on Paluszek’s map is a half-block alley at West 143rd Street, Colyer’s Row, containing six wooden row houses and an IRT substation. Back in 2008, Forgotten-NY contributor Gary Fonville documented nearly a dozen other old IRT substations , but missed this one. All feature a similar beaux arts design that fits well with the surrounding apartment buildings. I am not sure when Colyer’s Row disappeared from maps. A 1924 aerial survey shows an apartment building being constructed at the site of the alley. Today it is 610 West 143rd Street, completed in 1930 according to city records. 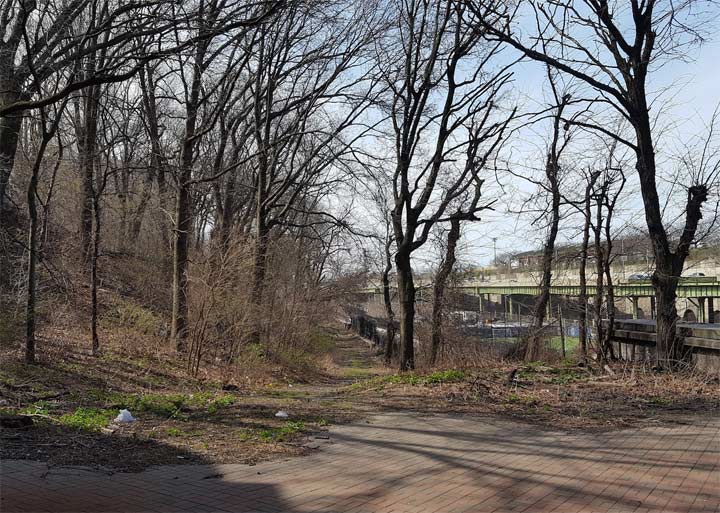 Why tease readers with a distant shot of the 145th Street underpass when there is an opportunity to hike down the cliff from Riverside Drive and see how far this tunnel extends? In the gap between Riverside Drive and Riverbank State Park, one can see the red brick paving of the abandoned turnaround and the overgrown bridle path from the 1909 map. While Central Park and Prospect Park still have their horse paths, this one hasn’t been used in decades. Since the 1930s, Henry Hudson Parkway has been running through the park on its way north to Yonkers. The gap below used to have a rail yard and is presently occupied by a salt shed and soccer field. 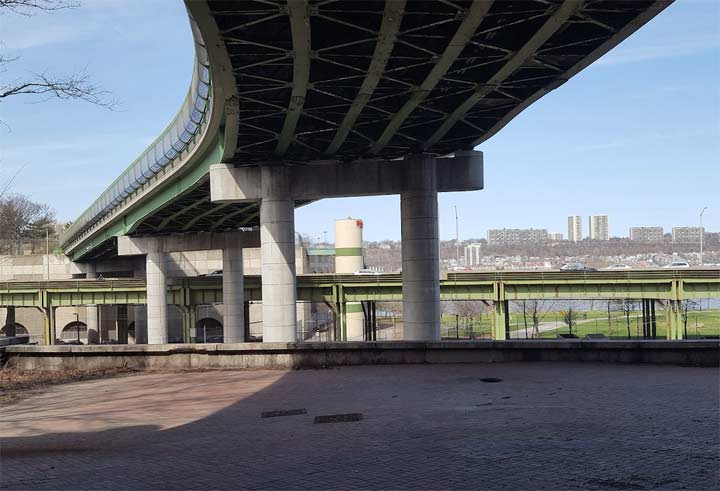 The extension of 145th Street across Riverside Park and the Amtrak Empire Corridor to Riverbank State Park opened in 1993. It connects the neighborhood to the park built on the rooftop of the North River Wastewater Treatment Plant. Across the Hudson River, the Palisades escarpment is topped by apartment buildings in Edgewater and Fort Lee. From 1898 to 1971, the Palisades Amusement Park provided views of the city along with rides and sideshows. It provided memories for nearly four generations, was the setting of anti-segregation protests in 1947, and inspired a 1962 pop music hit by Freddy Cannon. 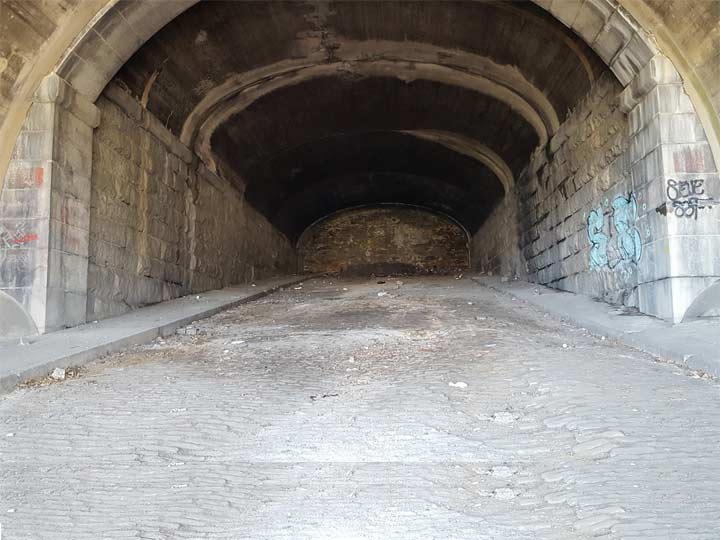 Turning towards the tunnel, I was expecting a portal into an underground world that would continue for many blocks. I was disappointed to see that it only extends for about 50 feet, the rest being filled in favor of a wider intersection above. The tunnel is paved with the same Belgian blocks that appeared on city streets in the prewar decades. In comparison to Old World cities such as Jerusalem, Rome, and Paris, don’t expect to find networks of catacombs and underground streets in New York. 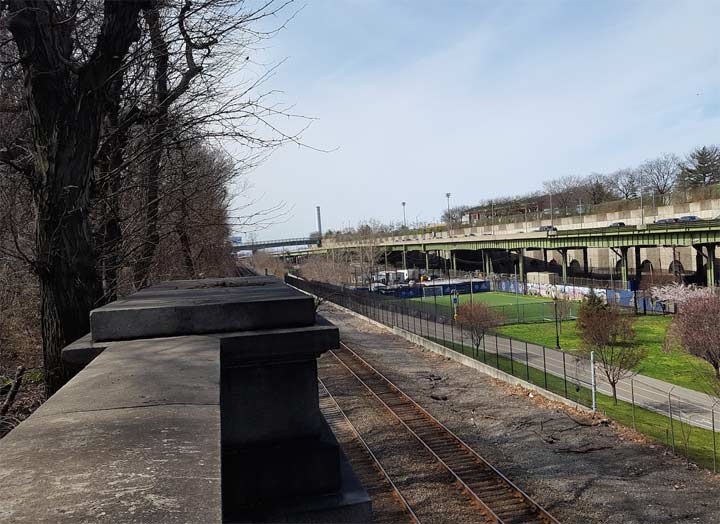 Atop the underpass is the extension of 145th Street leading into Riverbank State Park, used by buses to drop visitors off at the park’s ice skating rink and indoor pool. The facility is reminiscent of an aircraft carrier docked on the shore permanently, with two bridges mooring it to Manhattan. 145th Street is the main entrance into the park, and 138th Street is the less trafficked entry. In total there are eight state parks within New York City. Seeing the occasional state park, state route sign and state troopers within the city’s borders reminds me that NYC is part of a larger state that share’s the city’s name. 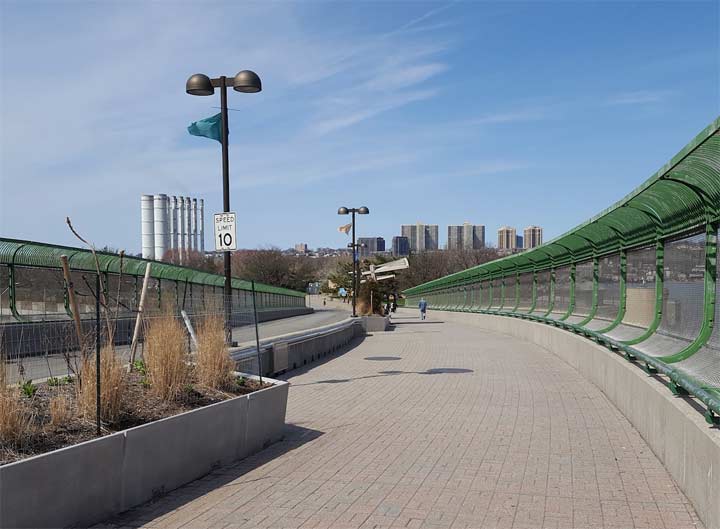 The 145th Street overpass leading into the park makes a curve to the south with views of the George Washington Bridge and Palisades cliffs, seemingly a departure from Manhattan but not really. 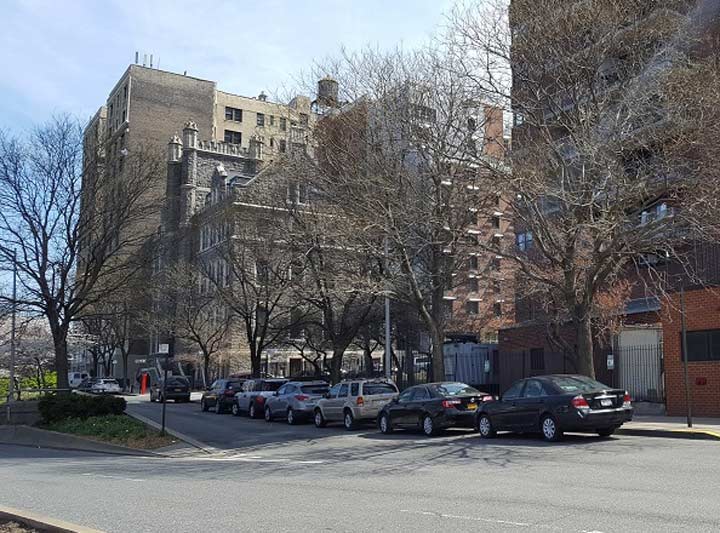 Five blocks to the south at 140th Street is 630 Riverside Drive, a gothic revival facility known to locals as The Castle. Designed by John W. Kearney, it opened in 1913 as Saint Walburga’s Academy, a boarding and day school for girls. At the time, Hamilton Heights still had plenty of Catholic institutions atop its hills including Convent of the Sacred Heart and Manhattanville College. The school relocated to Rye in 1957. Left unused it became a drug den and homeless hangout. Since 2002, it serves as a residence hall by the Fortune Society, which helps former convicts reenter society. How contrasting it must be to go from a prison to a castle. Its architecture is reminiscent of nearby CCNY, my alma mater. 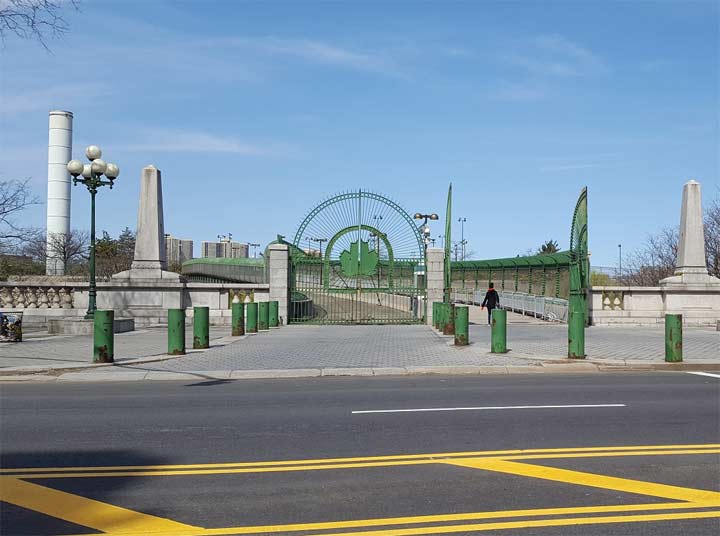 At 138th Street is the south entrance to Riverbank State Park. The bridge fits perfectly into the Williamson-designed plaza from 1902. The leaf on the gate is the logo of the New York State Office of Parks, Recreation and Historic Preservation. 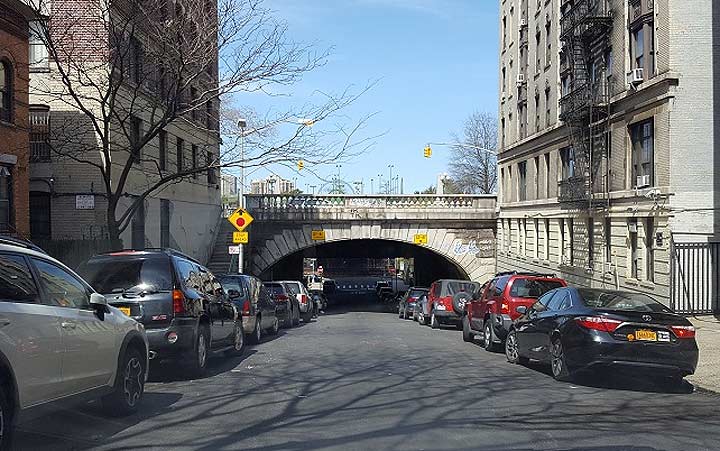 Below this entrance is the underpass for 138th Street. Unlike 145th Street, this one is still in use, providing a less trafficked connection between Hamilton Heights and Manhattanville. Above and below it has the classical inspired beaux arts elements that make Riverside Drive a unique thoroughfare.

The 1973 film “The Seven-Ups” features a more frantic tour of some of these locations. The main difference between this pursuit & the one in “The French Connection” is that the “Seven-Ups” producer actually got a permit unlike William Friedkin who didn’t & actually got away with it. Click the link & enjoy the tour:

The Seven-Ups was, in some ways, a better NYC movie than The French Connection. One interesting tidbit, though. In one scene, a car enters a car wash in Manhattan but when it comes out, the car is in Brooklyn!

Sergey and Kevin: This was my grandmother’s apartment building on 139th and RSD, Coronet Court. A fancy name for a building that, by 1945, wasn’t and by 1980 (when my grandmother passed away) definitely wasn’t. BUT, the NYPL has an amazing collection of apartment floor plans. This one now adorns the bedroom wall!

Another fascinating and excellent post, thanks also to three responses as well to fill in and present more of a picture of the area.
Hey NY2AZ you still reading old car magazines?

Fascinating post as always. I’m sorry the tunnel doesn’t have more history to it.

Still, gives me something to read while I await more posts about the Hidden Waterways of NYC on Serge’s blog.