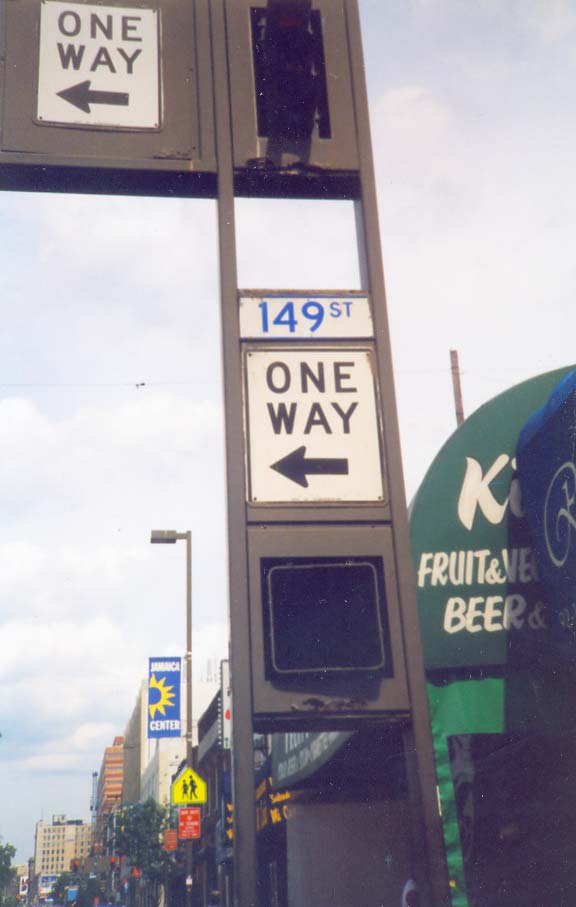 Though most color-coded NYC street signs were removed in the 1980s after a run of only about twenty years, a group of them on Jamaica Avenue between Sutphin Boulevard and 168th Street lived on, mounted on 1970s-era lampposts and stoplights that were used only on Jamaica Avenue (though similar-looking boxy lamps can still be found on disparate locales such as West 181st Street in Washington Heights and Church Avenue and Avenue D in East Flatbush. They are dying out, though, as they are replaced with newer designs as they fail.

For some reason, the Department of Transportation overlooked these signs for a good thirty years — they couple have easily been replaced with regulation green signs, but the “greenies” were placed elsewhere.

For those too young to recall, between 1964 and 1985, NYC streets signs were color-coded by borough: black type on gold signs (Manhattan, Staten Island); white on black (Brooklyn); Bronx and Queens were the reverses of each other, with blue on white for Queens and vice versa in the Bronx.

These Queens signs were eliminated in 2014 when Jamaica Avenue got a collection of retro-Triborough style posts painted silver. Other retro-“Tribes” in Astoria and Morrisania (Bronx) are painted black. 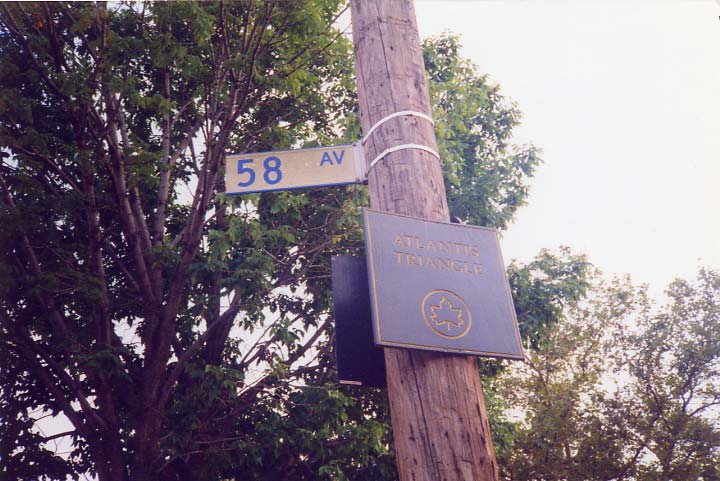 Another 1964-era Queens sign was surviving in 1999. The DOT is ruthless about removing them, and they’re picked off whenever the agency is alerted to their presence.

I always liked the color-coded signs – you could always tell what boro you were in by simply glancing at the signs. Now you have to guess, and in some neighborhoods where the borders overlap and are not well-defined, it can be difficult. Ridgewood is an example.

They use these type of signal poles in a number of cities: Goodyear AZ, Tempe AZ, Tucson AZ

I totally agree with Mitch45. In areas where borough ‘s borders zig zag, the color coded signs really helped you determine which borough you were in.

I guess the city’s honchos didn’t get the memo that said: IF IT AIN’T BROKE, DON’T FIX IT!

Cool info. Are bus signs all blue now as well? On another note , I wanted to ask you (the owner of this site 🙂 what you thought about the opening of the 2nd ave subway stops ? Thanks .

The 65th Crescent sign is still standing as of March 18, 2021! Passed by earlier today and the only change was they moved the sign to the streetlamp across the street