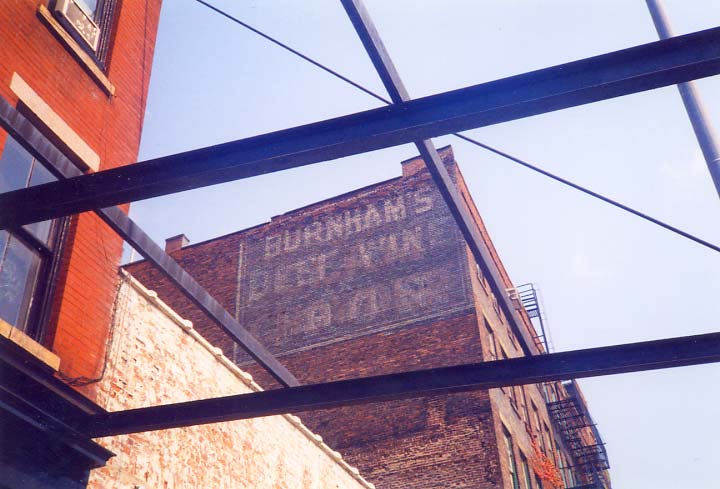 When I first saw this painted sign on Gansevoort between Greenwich and Washington, above the former Florent restaurant, I naturally assumed it said “Burnham’s BEET Wine.” Actually the T is an F. “Beef Wine” was a patent medicine popular in the 1900’s, comprised of port wine fortified with beef extract and iron, not unlike the tonic “Hadacol” that was so popular in the Deep South in the 1940’s which was Iron and a Vitamin B complex in a 12% alcohol base. In this area formerly filled with slaughterhouses and meat wholesalers, “beef wine” is appropriate.

Burnham’s in New York began as E. S. Burnham Co. Manufacturers Grocers’ Specialties at 120 Gansevoort St. around 1894, and moved to 53-61 Gansevoort in 1897. They were located here until 1929. Their products were groceries, produce, and druggist sundries. Apparently the sundries included medicinal tonics and extracts, as well as clam bouillon.

This is the top of a flyer for Burnham’s Great Restorative Tonic combining beef, wine and iron. The bottom of the same flyer mentions Burnham’s Clam Bouillon.

Regarding Burnham’s bouillon The American Druggist and Pharmaceutical Record of 8 October 1900 (vol. xxxvii, no. 8) wrote, “It was conclusively proven in the Spanish-American War that the Clam Bouillon of the E. S. Burnham Company was an invaluable preparation, both as a food and as a tonic. When arrangements for supplies for hospital use were being made by the Red Cross Society, and careful investigation was made by the society into the respective merits of every product, the E. S. Burnham Company was among the favored number and received a small order for their Clam Bouillon. Within a short time they received duplicate orders … With the public Burnham’s has been a popular article for several seasons…”

Just found a bottle of beef wine in Maine…Androscoggin River…..empty of course. Is there a value ………somewhere? Would a text pic be necessary?