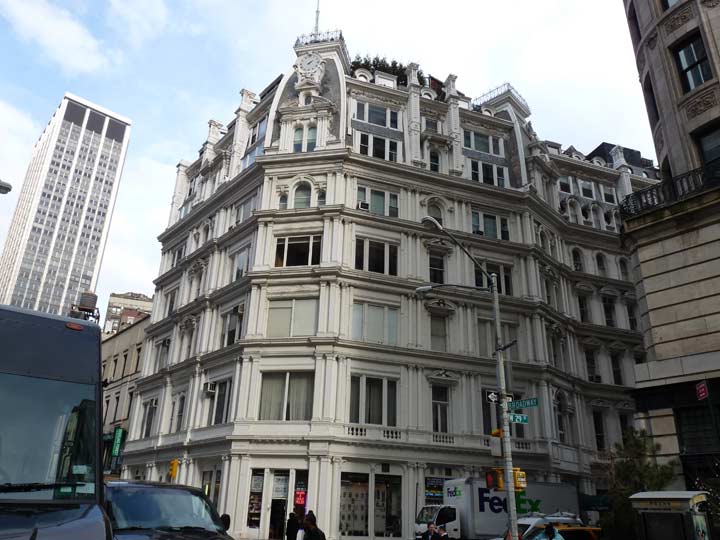 Every day when reporting to work at ANY Photoype at 130 West 29th Street (a grimy place, built between the wars and still there) from 1988 to 1991, I could look down the street and see the magnificent, mountainous Gilsey House at 1200 Broadway. It goes all the way back to 1869 and was designed by Stephen Decatur Hatch and Daniel D. Badger (which is a great name). When I was working in the area in the late 1980s it was painted deep brown, but it was later restored to the cream color it was reputed to have had when it first went up. It was the first hotel to offer telephone service to guests. It had a bar made of silver dollars. Playwright Oscar Wilde, author Mark Twain and Diamond Jim Brady, the great gourmand, were frequent guests. By 1911 the Gilsey closed down and the many rooms were occupied by garment trade lofts for several decades. 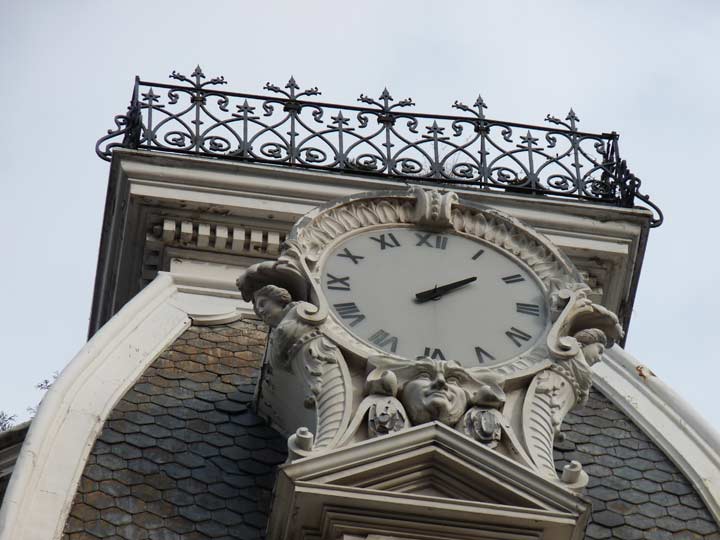 My zoom comes in handy for this kind of thing. The Gilsey clock is supported by a pair of caryatids and a head beneath. Ornamental architecture like this hasn’t been built since the 1920s and likely won’t be built ever again.

I would sometimes have lunch at a long-gone German restaurant that occupied one of the storefronts on the West 29th Street side called The Olde Garden, which was very atmospheric, with a great feel of Old New York City.

These days, boutique hotels for rich visitors are springing up on Broadway between Madison and Greeley Squares.

I’m surprised some developer hasn’t torn it down in favor of a glass box.

The building is a designated landmark; it could not be legally demolished.

word of the day: caryatid
from wikipedia, “A caryatid (/kæriˈætɪd/; Greek: Καρυάτις, plural: Καρυάτιδες) is a sculpted female figure serving as an architectural support taking the place of a column or a pillar supporting an entablature on her head.”