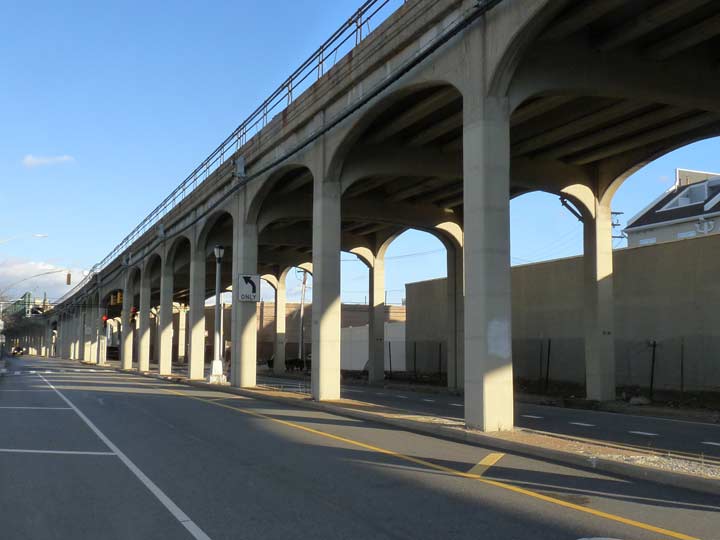 The term “freeway” is commonly used in Southern California in the Los Angeles metropolitan area to designate an expressway without tolls. In New York City, there’s one and only one freeway and it came to be because of a railroad.

Before 1942, the Long Island Railroad ran at grade, at level with auto roadways, on the Rockaway Peninsula between Rockaway Park and Far Rockaway, which connected with the main line through the Five Towns. That year, with auto traffic becoming common, the LIRR decided to eliminate the grade crossings and placed the railroad on a concrete-clad trestle. The railroad crossed the bay, while the Far Rock and Rock Park branches connected through a wye.

In 1950 the LIRR ended service across Jamaica Bay when a fire destroyed an ancient wood trestle. The LIRR sold the cross bay tracks to the NYC Transit Authority, which commenced service across the bay to Rock Park and Far Rock in 1956. Soon after, the connection to the main branch of the LIRR was severed, with LIRR service nosing into Queens at Far Rockway, but no further.

Meanwhile, a new roadway was constructed beneath the concrete trestle and christened Rockaway Freeway. In some spots there are lengthy stretches between stoplights and it can be a speedway as well as a freeway. When I first encountered it on a bike ride from Bay Ridge in the 1970s, the Freeway was illuminated by Belt Parkway-style “Woodie” lamps, but these were replaced by standard posts in the 1980s. Rockaway Freeway begains and ends at Beach Channel Drive between Beach 32nd and just east of Beach 116th Streets.

Grew up in Far Rockaway and my late father worked for the LIRR(hired on the railroad in 1924)and I was told as a kid the LIRR(WPA/PRR Funds)bilt the elevated in the late 30’s to help with the depression unemployed…..
Whats the story????

I very much doubt that the trestle would have been constructed during the height of WWII, when EVERYTHING was devoted to supporting the war effort; e.g., there were no 1942-5 automobile models. The PWA type construction during the New Deal makes a lot more sense.

In California, a “freeway” is so designated, not for absence of tolls, but because vehicles enter and exit on ramps, and the traffic flows “free” of any cross-traffic. By this definition, I believe “expressways” in NYC would be the equivalent of “freeways” in So Cal. (I speak as someone who has been on the LIE exactly twice.)

In the Golden State, the same road may be, at different points, a “freeway” and a “highway.” If there are roads that cross it without ramps, it ceases to be a “freeway,” and as you approach these crossings, there is a sign “End Freeway” to alert drivers to the cross-traffic. Once past the crossings, there’s another sign that says “Begin Freeway.” Some locals try to convince visitors that the State Highway Commissioner was a great admirer of one-time Israeli premier Menachem Begin, and named a freeway in his honor, but only the especially gullible believe that.

The definition Mark 805 gave about California “freeways” is what I was told from my father, a civil engineer for the State Dept. of Highways, Bridge Division (later became Caltrans). California hTas toll bridges, but northern California had no toll roads in the later half of the 20th century. I can’t speak authoritatively about southern California., Before I moved out of California in 2015, there was talk about establishing tolls for express lane usage.

Historically, California did have toll roads through the Sierra Nevada mountains, made by early residents after the discovery of gold. These private toll roads were later either abandoned, or taken over by the state and improved for the automobile.

Expressways in NY allows trucks whilst Parkways do not.

The LIRR elevated structure on the Rockaway Peninsula was part of a larger grade crossing elimination project spearheaded by Robert Moses. Between East New York and Morris Park (just east of Lefferts Blvd.), the LIRR tracks were on a short, older elevated structure, and then ran at grade in the middle of Atlantic Avenue. The grade elimination project relocated the LIRR tracks into a tunnel (still in use), and in the process eliminated all but one of the LIRR’s numerous local stations between East New York and Jamaica. That station was Woodhaven, in a subway-like station below and perpendicular to the LIRR Rockaway Beach Branch. Woodhaven Station closed in 1972 but is still in the tunnel, where trains pass it day and night. Robert Moses wanted to eliminate all LIRR grade crossings on the Rockaway lines, and he succeeded. While his motive was primarily to improve motor traffic, he did succeed in building a major transit improvement.
Should also note that in 1933 NY City almost bought the LIRR Rockaway Beach Line from Rego Park southward, with a plan to connect it to the IND subway east of 63rd Drive Station. That’s why in 1942 the LIRR’s new stations on the viaduct on the peninsula were designed for easy conversion to subway stations with turnstile fare collection, which eventually did occur.
Between 1956, when subway service began, and 1975, Rockaway was a two fare zone. Passengers travelling to and from stations between Broad Channel and the two Rockaway branches had to pay a second fare when leaving the train. Returning to Brooklyn or Manhattan, one had to put two tokens in the turnstile. This double fare was eliminated in 1975 when the basic subway fare went from 35 to 50 cents. For Rockaway riders, it was a fare decrease, from 70 to 50 cents.

You are correct us people living in Far Rockaway had to pay a double fare . The MTA reason was to pay for the Bridge crossing
between Broad Channel & Rockaway that was repaired – fixed due to the Fire on the Trestle.
I believe the MTA kept up the double fare even when the recouped the funds until our complaints were taken seriously

The Rockaway Freeway exits the concrete trestle just east of Beach 108th Street and turns to intersect Beach Channel Drive behind Waldbaums at about Beach 112th Street. The train tracks go to level grade at Beach 110th Street. I grew up in the early 1950’s at 115-02 Rockaway Beach Boulevard down an alley that ended at the fence prohibiting access to the LIRR right of way. We used to climb that fence and pick blackberries off the bushes, always remembering to stay far away from the Third Rail.