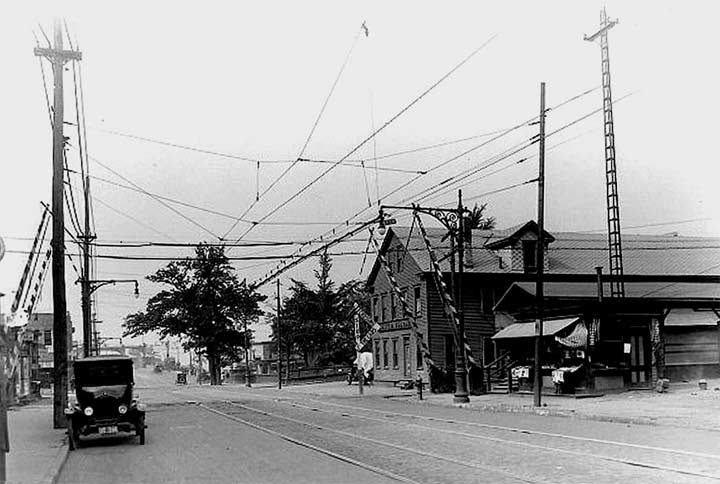 While I still have yet to walk the route of the old Long Island Rail Road Whitestone branch (recently, anyway) I’ve been doing some surveys using Google Earth and found the pickin’s a bit slim. The branch was eliminated in 1932, after all!

However, Bill Mangahas of annual MTA calendar fame sent me a number of photos of the line, and I was able to find a nice bit of a remnant on Northern Boulevard.

Above is a scene from the Roaring Twenties showing the LIRR Whitestone crossing Northern Blvd. at Collins Place on the way to the Flushing Bridge Street station, protected by crossing gates. Notice that 3-story peaked-roof building just past the upraised gate. 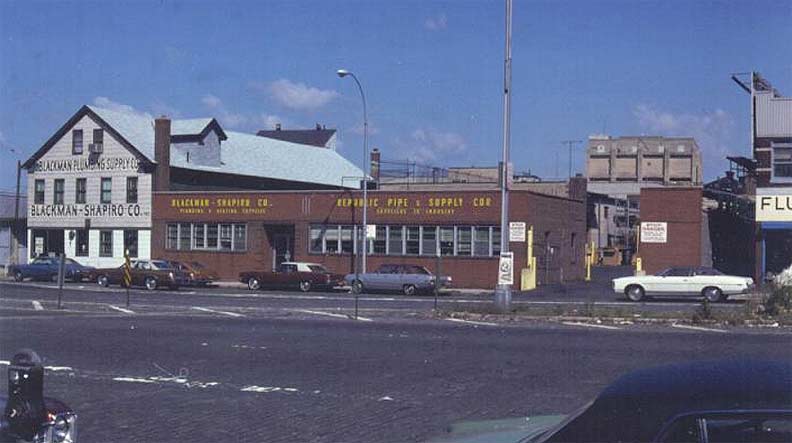 Move the clock forward to 1978 and we see the same building, now home to the Blackman-Shapiro Plumbing Supply Company. It has built a brick extension where the old grade crossing and station a few feet to the rear used to be. Off camera to the left was the Northern Boulevard Bridge over the rushing Flushing River. photo: Arrts Arrchives 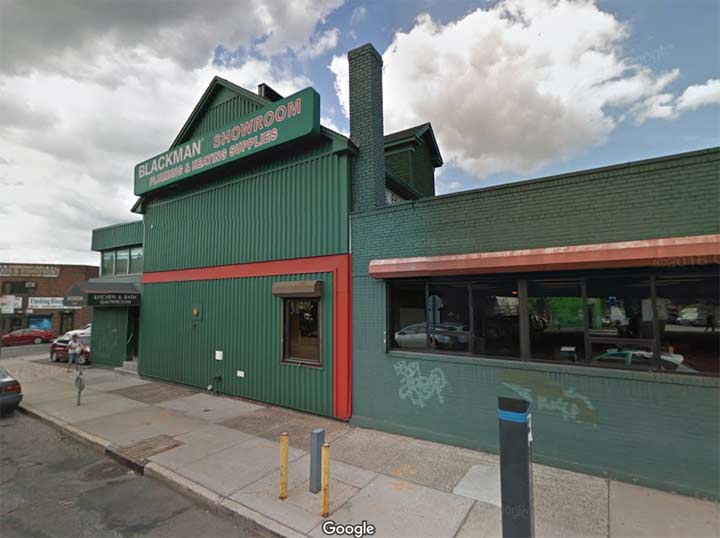 Moving the clock forward once more to 2017, Blackman Plumbing Supply is still there, in its now-unrecognizable peaked building. It’s been clad in green insulation, and the brick extension has been painted green. The dormer window is still visible.

This scene is now overshadowed by an overpass as traffic crossing the Flushing was transferred to a new bridge in 1980. This is a service road catering to local businesses and College Point Boulevard traffic.

No one, and I mean no one, knows this is the site of an ancient railroad, but that’s why there’s… Forgotten New York.

That’s why I love this site. Once again, what you do is invaluable! Thanks.

My maternal great grandfather, George J. Easton, employed by the Long Island Railroad from 1894-1939, first as fireman, then engineer/motorman, lived in Whitestone Landing for most of his life with his wife Maggie. I have photos of him with various locomotives and electric trains. Their only child, a daughter, Jessie–my mother’s mother–was born in Bayside1899, while the Eastons still lived there. Jessie met my grandfather, James J. Walsh, and they were married in 1928, renting on what was then Cross Island Blvd, and is now Clintonville Street. They moved to Bayside in 1936. The house where the Eastons lived in Whitestone, 10-12 Clintonville, is still there. I’d absolutely love to walk the Whitestone line, looking for remnants. I’ve studied the maps on Historic Map Works. Please feel free to contact me if you’d like to see some of my family collection.

Thanks for the link!

A couple of years ago, I tried to retrace the route of the old Whitestone line after taking a walking tour that visited the neighborhoods. Malba I found to be pretty high end still. My retracing didn’t get out of Flushing. It’s changed so much since 1932. I might try it from the north going south next time.