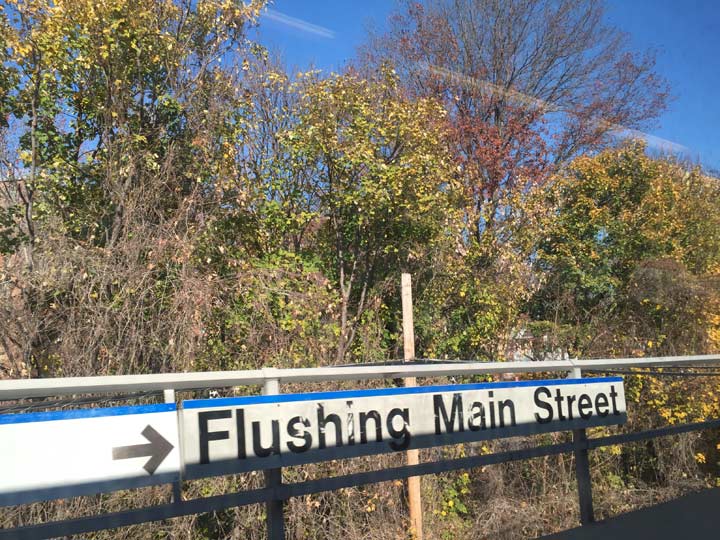 Riders on the Long Island Rail Road Port Washington Branch (as I have been since 1992) are quite familiar with the Flushing Main Street station. But there’s something unusual about the name. Most stops along the line are named for communities… Woodside, Bayside, Little Neck, Plandome. Even Broadway is named for the Broadway community surrounding the station, which took its name for Northern Boulevard’s old name. I’ll refer to that thoroughfare again in a moment.

Why specify Flushing by adding “Main Street?” The reason is simple. There had been two Flushing stations. 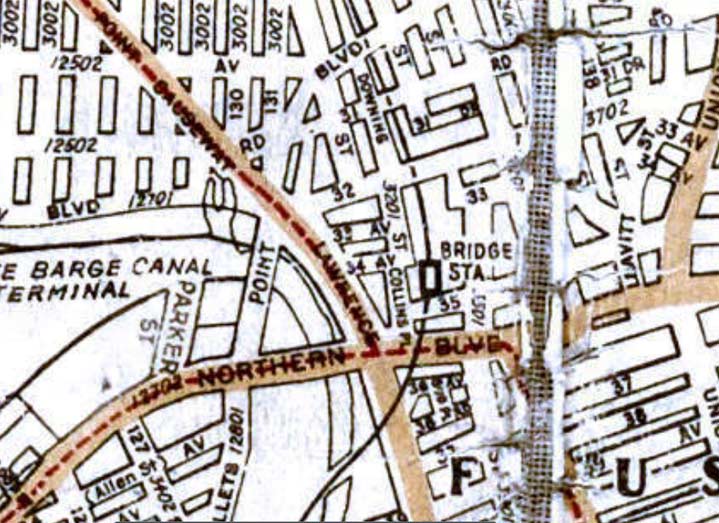 Let’s turn back the clock to 1922 when one of the first Hagstrom NYC map editions came out. Northern Boulevard is bridged over the Flushing River here, while Willets Point Boulevard never was; there was a bridge on the books that was never built. Northern Boulevard acquired its present name between Queens Plaza and the Nassau County line in 1920. It was called North Hempstead Turnpike east of that, but the Northern Boulevard moniker has gradually take over east of there almost to the Suffolk County line.

When the Whitestone Branch of the LIRR was constructed in the 1800s, a stop was placed at Bridge Street, in Flushing. The part of the line that ran out to Great Neck and Port Washington already had a Flushing station. Thus, the railroad began to call one station Flushing Main Street and the other, Flushing Bridge street. The map shows you where the station was, although it just has “Bridge Sta.” to mark it.

I haven’t covered the Whitestone Branch remnants since 2000, but now I have this 1922 map marking its former route — so I’ll soon be traveling to where the railroad was and seeing if there’s anything left. The branch was shuttered in 1932 after the LIRR unsuccessfully tried to sell it to NYC as an addition to the Flushing IRT. I wish that transaction had taken place!

Actually, prior to the wholesale renaming of Queens’ street names in the 1920s, the Jackson Avenue portion of what is now known as Northern Boulevard, terminated on the east at the Flushing River and bridge. The portion of Northern Boulevard that was originally named Bridge Street (in Flushing), ran eastwards from the Flushing River and bridge to it’s intersection with Union Street and (the portion of Union Street north of Bridge Street/Broadway formerly named) Whitestone Avenue, to where it became Broadway running eastwards to the Queens/Nassau border.

Coincidence that one station name is reversed ?

There are remnants of the Whitestone LIRR line in backyards between 150th and 149th Streets 14th Ave to 10th Ave in Whitestone Village.