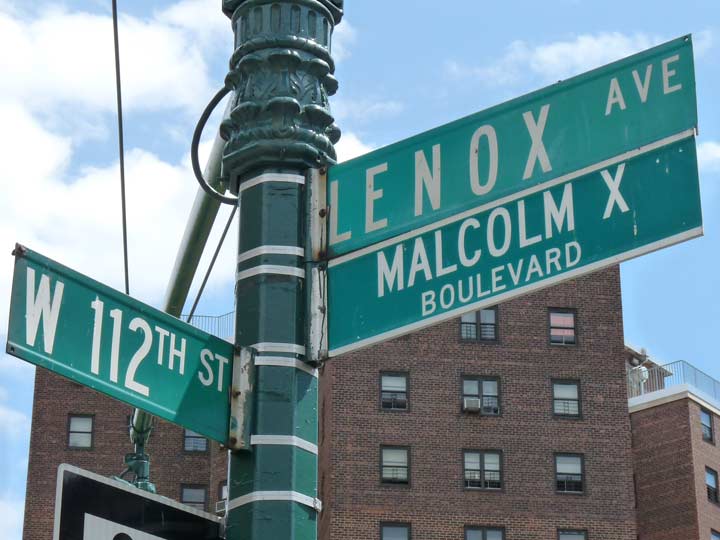 6th Avenue runs up the center of Manhattan Island; in his compilation Ferrari in the Bedroom, humorist Jean Shepherd called it “the armpit of Manhattan.” It was originally laid out in 1811 from Carmine Street in Greenwich Village north to the Harlem River, and in 1928 to facilitate the new IND Subway, it was extended south about a mile to Church and Franklin Streets in Tribeca.

Then came the gradual whittling away of its identity. After the construction of Central Park in the 1850s and 1860s, the northern portion of 6th Avenue above Central Park North was renamed (in 1887) for the Lenox family; Scotsman Robert Lenox immigrated to NYC in the 1760s and became president of the NYS Chamber of Commerce from 1826-1839. In 1839 his son James Lenox established a library on 5th Avenue and East 70th Street that was a precursor of the NY Public Library system. The name is believed to be derived from the Gaelic leamhanach: “elm trees.”

Exactly one hundred years later, in 1987, Lenox Avenue acquired a new, separate name: Malcolm X Boulevard, honoring the civil rights leader/writer/orator who was assassinated at the Audubon Ballroom in Harlem on February 21, 1965.

Unusually, the letter “X” has figured in those three permutations of the avenue’s name.

Most New Yorkers were aware of 6th Avenue’s renaming in 1945 by Fiorello LaGuardia as The Avenue of the Americas, honoring the USA’s participation in the Organization of American States (“American” here meaning Northern, Southern and Central). “Avenue of the Americas” is a mouthful, and this was before the era of abbreviations like “Avam” and thus New Yorkers went right on merrily calling it “6th Avenue.” The Department of Transportation finally capitulated and restored “6 AVE” signs in the 1980s.

Flags and logos of the several countries in the WQestern Hemisphere were displayed on lamp posts.

Growing up in Brooklyn, there’s not much I can say about 6th Avenue, but I sure do remember Jean Shepherd. I used to listen to him on WOR most every evening in the 60’s. A very entertaining guy!

LaGuardia was rumored to have said “When I make a mistake it’s a beauty” about the renaming of sixth avenue.

Sixth Avenue – probably from the 20 through the 40 Streets – was also within New York’s once notorious Tenderloin District; the fact that, until 1939, it was also covered by the 6th Ave. EL also hurt the aesthetics. Things started to change with the construction of Rockefeller Center but as late as the early 1970’s much of the avenue south of the Center was pretty sleazy – and clearly justified Shep’s “armpit” comment.

Most of the flags from the various countries are sitting in a warehouse awaiting the will and funding of NYC to put them back. They have been there for years. As seen on FNY, a few remain on the avenue.
Don’t expect a full return anytime soon. It has already been several years.