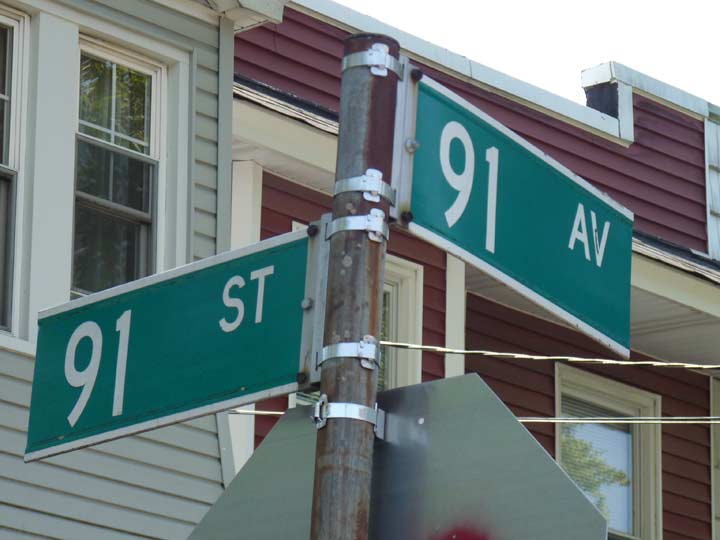 A little late with a post today, so i’ll revisit one of the stranger aspects of Queens’ conversion to numbered streets beginning in 1915: when the numbers are the same.

Beginning in 1915, NYC decided to number most of Queens’ streets to repair confusion that had sprung up. In effect, the city created a different kind of confusion, but in 1915 it seemed like a good idea. Beginning with European habitation beginning in the 1600s, a handful of major hubs such as Jamaica and Flushing had sprung up but Queens remained a county consisting of small towns here and there, connected by mostly dirt wagon traces — major roads were rare. Many of these small hamlets had their own numbering systems, and many had names like Main, Washington, Lincoln, and plant names — the kind you find in small towns everywhere.

The solution was to give most streets numbers in a single, all-encompassing system. However, geography and statistics being what they are, there were spots where both the east-west numbers and north-south numbers are the same. You can take a street map of Queens, hang it on a wall and use a ruler and a pencil to draw a line through those neighborhoods where the numbers come together, from Astoria southeast through Sunnyside, Ridgewood, Glendale, Woodhaven and South Jamaica.

But nothing compares to Maspeth, where in one area, every street is named 60….

There are parts of Queens where the numbers don’t interesect, but they repeat – it’s just different “types” of roads. For example (and this one is made up), you’ll have 94th Street, followed by 94th Road, then 94th Place, then 94th Lane. That sort of thing.

I read somewhere that this was done because the powers that be were concerned that if every numbered road was a “street,” the numbers would get too high, and the different “types” were added to help keep the numbering down. Do you know anything about this?

In any case, the highest numbered street in NYC is 271st Street in Floral Park/New Hyde Park. So maybe there’s no truth to the ‘keep the numbering down’ theory.

165th Avenue is the highest Avenue in Queens

Your theory makes sense. Otherwise Queens might have a 400th Street/Avenue or even higher.

If Nassau County ever became part of NYC, I wonder if we would ever see something like 498th
Street?

Nassau was part of Queens until 1898, when the three eastern towns broke away to become Nassau. However, those three towns were never part of NYC

When the developers came along and inserted a roadway between the Avenues (but generally parallel to them) those were usually called a ‘Road’ and then a ‘Drive’ based upon the Avenue name.

Look at 82nd Ave. in Floral Park near Little Neck Parkway: The first road south is 82nd Road. The next one south is 82nd Drive, then comes 83rd Avenue. They would get creative and a ‘Terrace’ every now and then.

If there was a road that came between 2 Streets, that was usually called a ‘Place’. Example: 218th Place in Queens Village.

This is often cited as evidence of how confusing Queens streets are. This is surprising from people who can usually figure out what it means when 1st avenue meets 1st street or 10th avenue meets 10th street in Manhattan. It’s not rocket science.

When the grid was laid out, Streets ran North/South and Avenues East/West. There was a method to the naming of the Roads, Drives, Places, etc.

Take a look in Floral Park at the intersection of 82nd Ave. and 255th St. There are two roads south of 82nd Ave before you get to 83rd Ave. The first is 82nd Road, followed by 82nd Drive. That was the standard pattern for roads between Avenues. An alternative would be like 87th Terrace, since there already was a Road and Drive.

When it comes to Streets, the most common variant is Place. See Queens Village with 218th Place between 218th St. and 219th St.

Once you get into neighborhoods with name streets, the pattern doesn’t hold up very well.

You forgot to mention Maspeth this time.

Single numbered Avenues are in College Point as well as Whitestone.