I was fresh from the “Parade of Trains,” an MTA event in which BRT Brooklyn Union Elevated cars from 1900-1910, BRT/BMT Standards and BMT Triplex Cars from the 1920s, and R1/R9 IND cars from the 1930s were on exhibition at the Brighton B each station and running between the Ocean Parkway and Kings Highway stations. Photos from this event will eventually leach out on FNY and SpliceToday.com, but today’s post concerns what I did after I had had my fill of old subway trains. 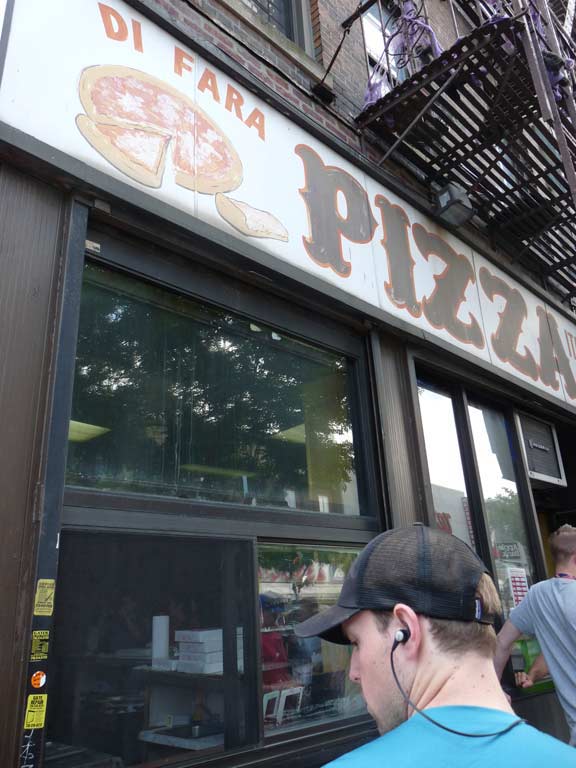 I decided to do something I hadn’t done for over a decade: head off to DiFara, Avenue J and East 15th, Brooklyn’s most famous pizzeria, for a couple of slices. This is never a good plan on Sunday if you have any appointments later in the day but I didn’t have any, and so buckled down for what came to a two-hour wait. It was about 1:15 wait to get in the door to make an order, and about a 45-minute wait for the slices to arrive. This is nearly unconscionable in NYC, where pizzerias are constantly making multiple pies at once and slices arrive in short order.

The pizzeria has been owned and operated by Domenico DeMarco since 1964 and the original painted signs may still be on the exterior. DeMarco himself, at age 82 in 2017, still prepares most of the pies personally. DeMarco, a native of the Caserta province in Italy, near Naples, immigrated to the States in 1959 and aftre working on a Long Island farm, decided to go into business as a restaurant owner and “pizzaiolo” and opened DiFara with a partner named Farina; Di Fara is a portmanteau of the two names. DeMarco bought out his partner in 1978.

He makes 100 to 150 pies a day. DeMarco uses imported ingredients – flour, extra-virgin olive oil, San Marzano tomatoes, buffalo mozzarella cheese from Casapulla, freshly grated grana padano (a slightly salty hard cow’s milk cheese), three types of mozzarella cheese, and hand-grated Parmigiano Reggiano cheese are all from Italy, and the basil and oregano are from Israel. In a windowsill flower box, he grows thyme, oregano, basil, rosemary, and hot peppers. He cuts fresh basil over each pie with a pair of kitchen scissors. The pizzas bake for a few minutes at about 800 °F (427 °C).In July 2009, Di Fara raised its price for a plain slice of pizza from $4 to $5, becoming the first $5-a-slice pizza place in New York City. wikipedia

To me the slices seemed smaller than they did on my last visit a decade previous. The tomato and basil flavors were unique among pizzeria slices I’ve long been used to (though Best Pizza in Williamsburg uses basil). 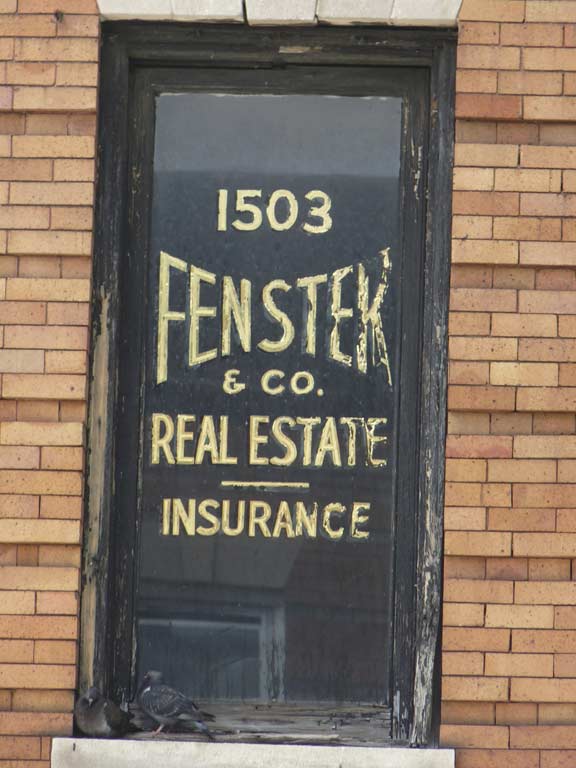 You just don’t find a lot of gold-leaf lettering in windows anymore. The (Leo) Fenster Real Estate Agency, 1503 Avenue J, has been in this location since 1959 when it moved from Avenue M, where it had been founded as the Benjamin Fenster real estate agency in 1938. His son Leo took over after “Benny’s” death in 1954, and Leo’s sons Robert & Michael, and grandson Marc now run the place. 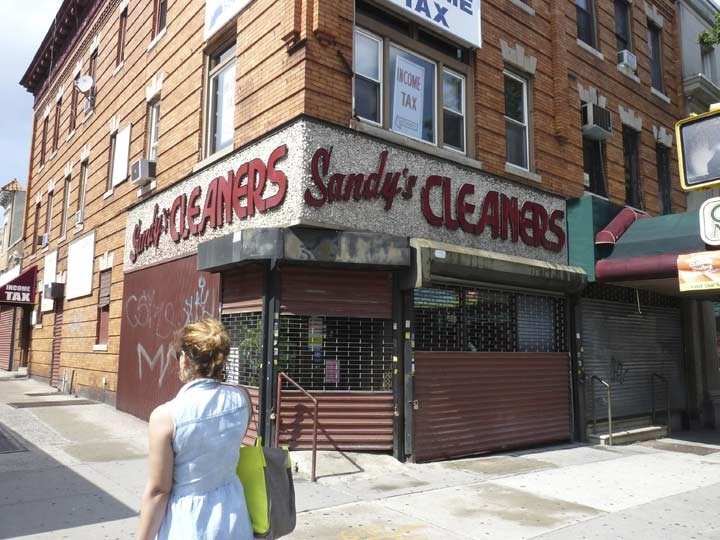 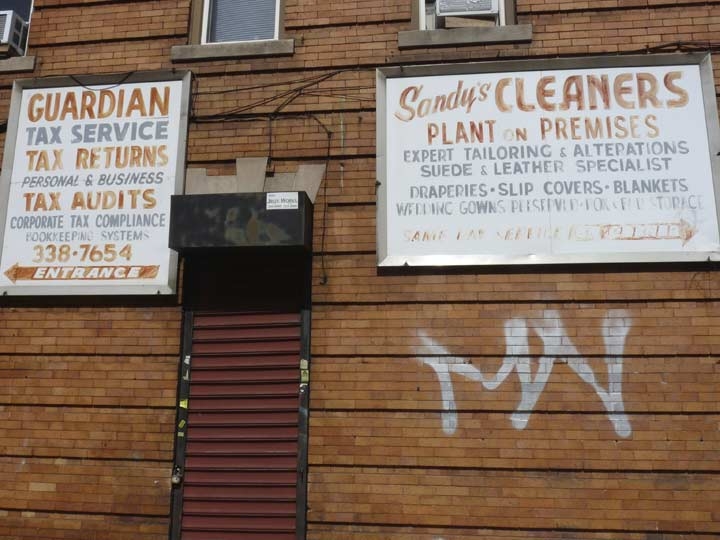 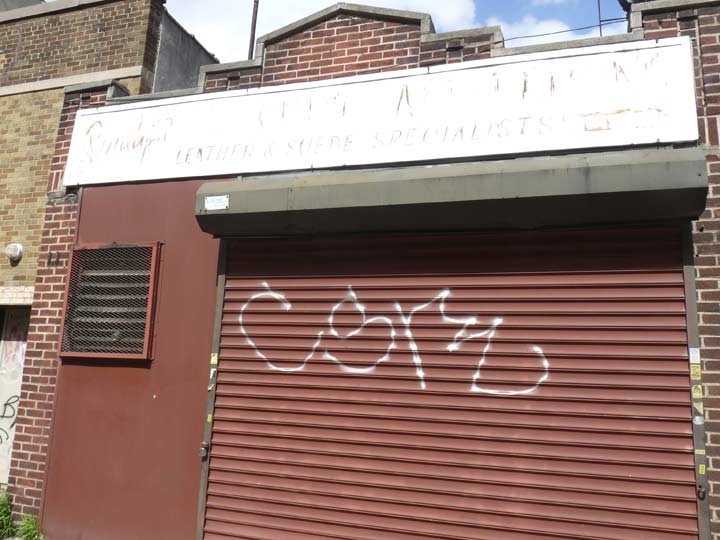 There’s a plethora of signs, both handlettered and plastic, catercorner to Di Fara at Sandy’s Cleaners. 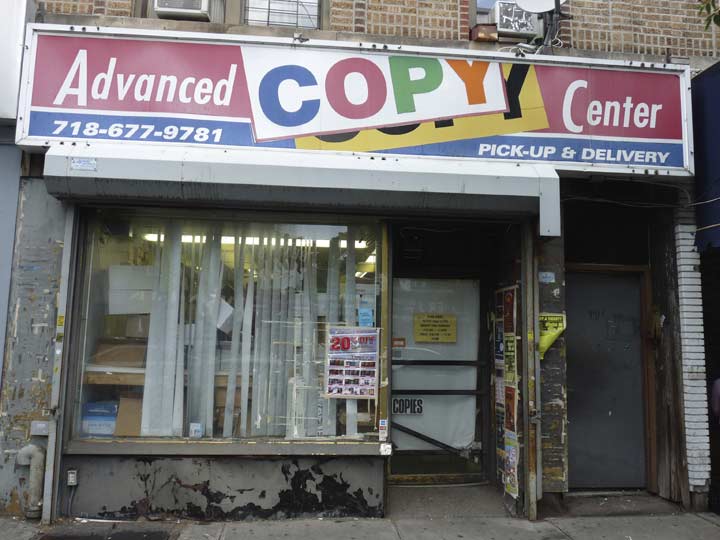 Another in  a series of what appear to be handcrafted sidewalk signs on Avenue J in the business section between Coney Island Avenue and East 16th. 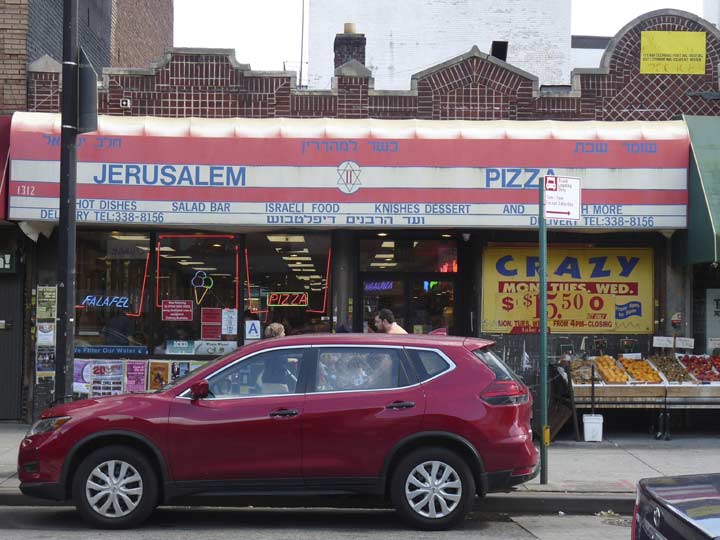 This section of Midwood is Orthodox Jewish and while there are a number of pizzerias on this stretch, Di Fara’s remains the place to get Italian pizza as opposed to the kosher variety. 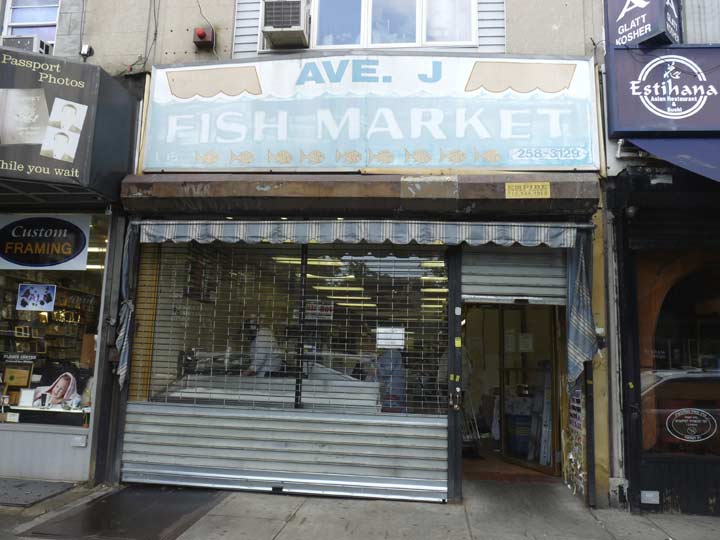 Another sidewalk sign still fulfilling its purpose after several decades of usage. 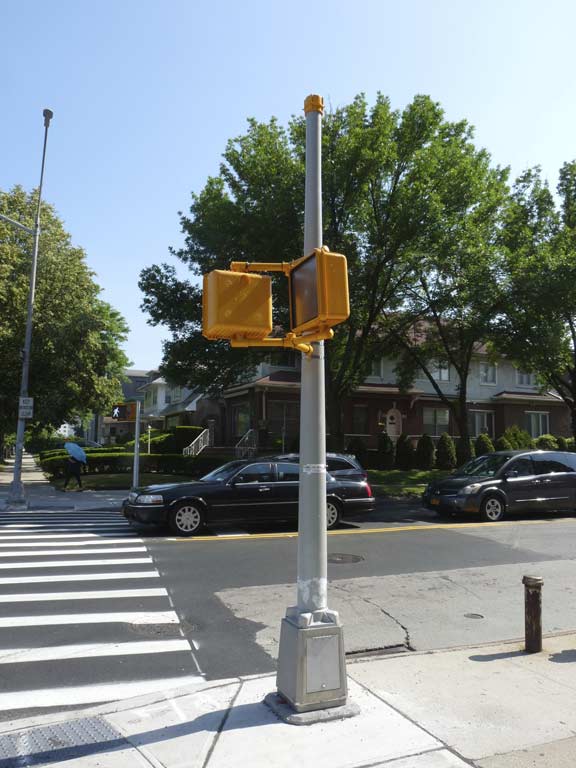 An unusual use of a midsize stoplight stanchion at avenue J and Ocean Parkway. As a rule these usually have 3-lamp stoplights affixed to the apex. Here it serves only to carry the pedestrian control signals. 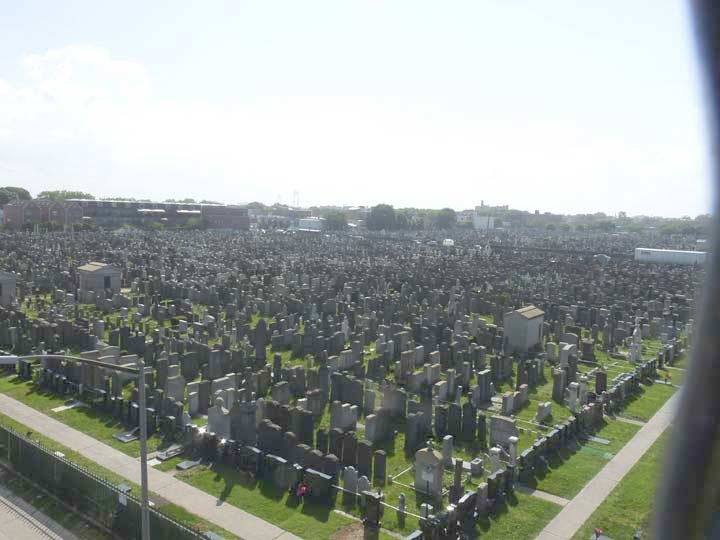 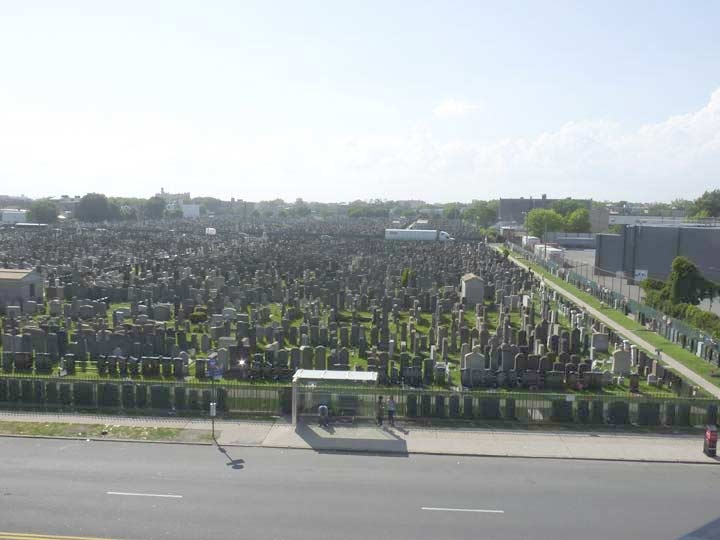 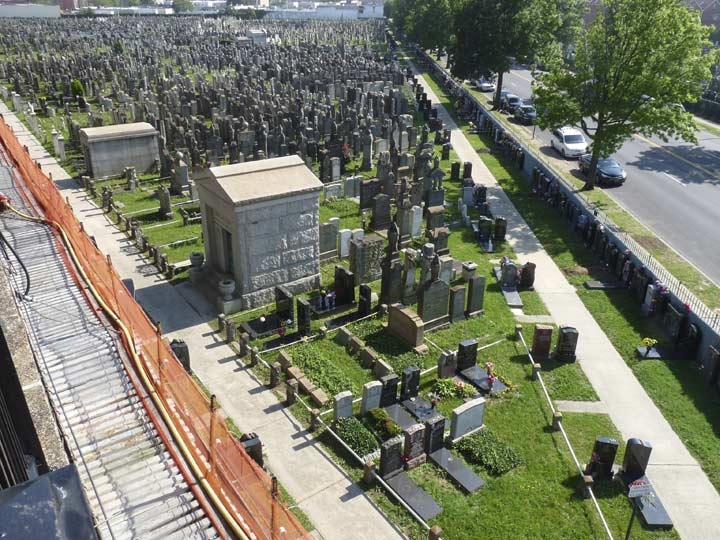 I headed for the Bay Parkway station on the elevated Culver (F) line, but was forced to ride south to Kings Highway for a northbound, as most northbound stations on McDonald Avenue are closed for rehabilitation. The southbound train overlooks the rather vast Washington Cemetery, which stretches irregularly between 19th Avenue and Ocean Parkway and from 53rd to 57th Streets and another plot south of Bay Parkway east of McDonald Avenue. 19th through 21st Avenue and Bay Parkway run through it.

Washington Cemetery has been in Kings County since the mid-1850s, and while it has a primarily Jewish clientele today, that wasn’t always the case; cemetery founder James Arlington Bennett is interred within. He was also an educator and ran for Vice-President in 1840 on a ticket with Joseph Smith, author of the Book of Mormon and founder of the Church of Latter-Day Saints. 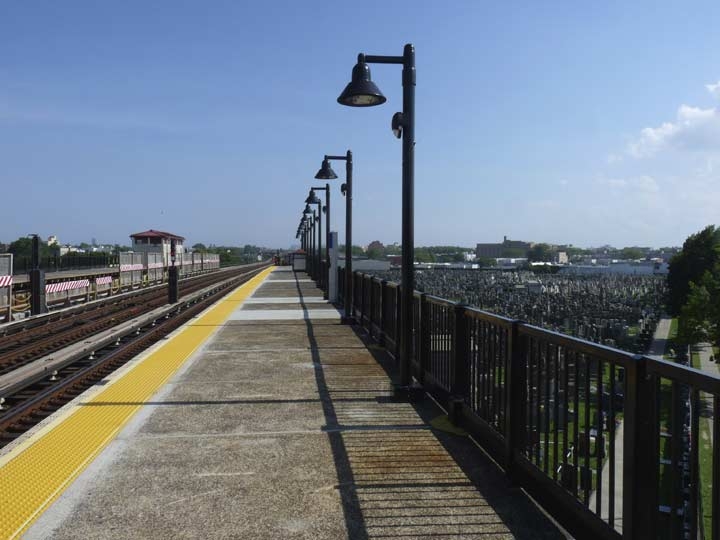 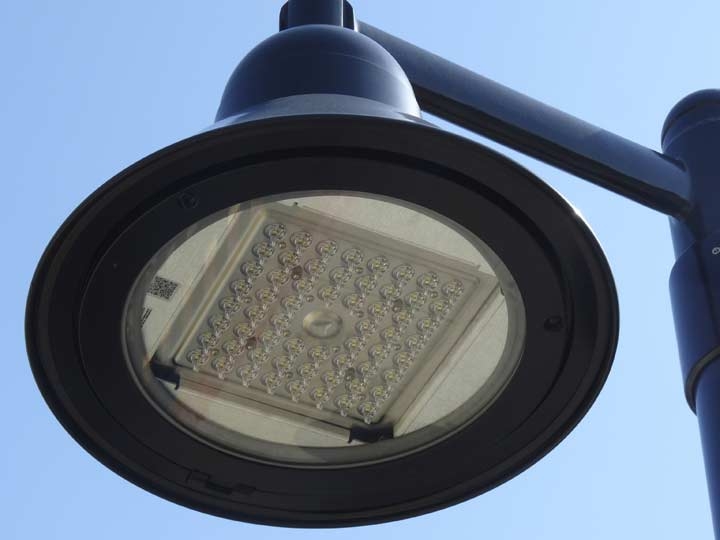 Finally, the platform lamps at Bay Parkway are traditionally-shaped, but are ultramodern, bright white  LEDs.

$5 a slice? I remember Freddies Pizzeria in Whitestone, 15 cents a slice & 10 cents for a small coke. That was a few years ago.

Where I come from an entire 14″ pie costs $6.40 (tax included) with no waiting line. Order & in less than 10 minutes your pie is ready. News flash: It’s just pizza!
Here’s 2 examples on different sides of the local restaurant spectrum:

Re: the Fenster Real Estate sign painted on the window . In Yiddish and German, the word fenster (or finster) means “window.” So here, it’s “Window” on the window!

I actually did go to Jerusalem Pizza not that long ago. Unfortunately, having to keep kosher, you can’t toppings there such as pepperoni and sausage since pork products aren’t kosher. Unlike Naomi’s Pizza over in Kew Garden’s Hills, which I have also been to, their cheese pretzel is actually cut up into pieces rather than served as a whole, but that’s just about it. There have been times when I had to get some kosher items for my parents when I’m in that area especially over at Holon Market, which is located further down on Kings Highway. However, there is a main difference when I do this after a Nets game because there is a subway stop nearby even though I only did that once so far whereas I don’t have that option for Queens Pita and Amaliya after a Mets game because there is virtually no subway near that area, so getting there without driving would be a hassle.

IMHO, I love pizza as much as anyone, but waiting 2 hours for a pizza, a seat at a restaurant, a cupcake, special loaf of bread, new artisanal beer variety, etc. etc. is insane. Go somewhere without the crowd and enjoy yourself. Lots of good places in NYC w/o having to inconvenience yourself so much.

In 1958 on Liberty Ave & 112th Street in Richmond Hill, you could get an entire pizza for $1.25, a slice for 15 cents and a coke for a dime; had two friends that would each eat two slices while waiting for their pies to be cooked. Today their bill would have been $30 each!!

The Bay Parkway station overlooking Washington Cemetery is the setting for the cemetery scene in the 1988 movie The House On Carroll Street, staring Jeff Daniels and Kelly McGillis.