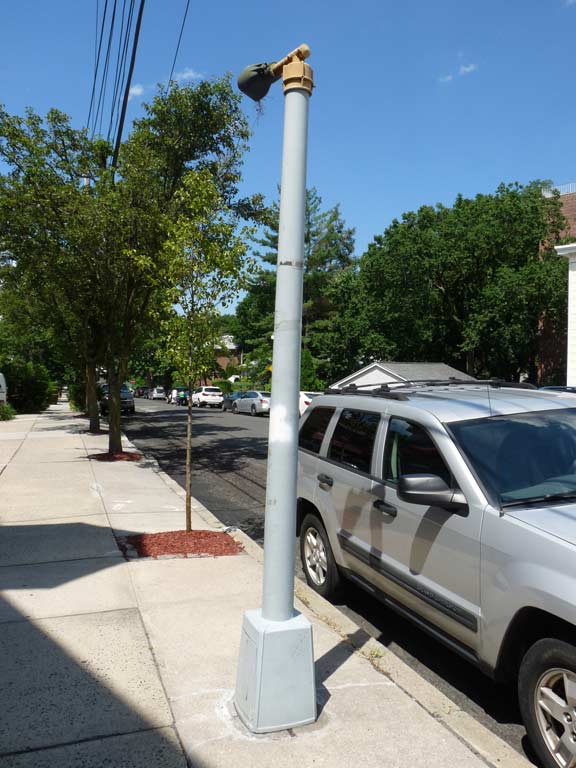 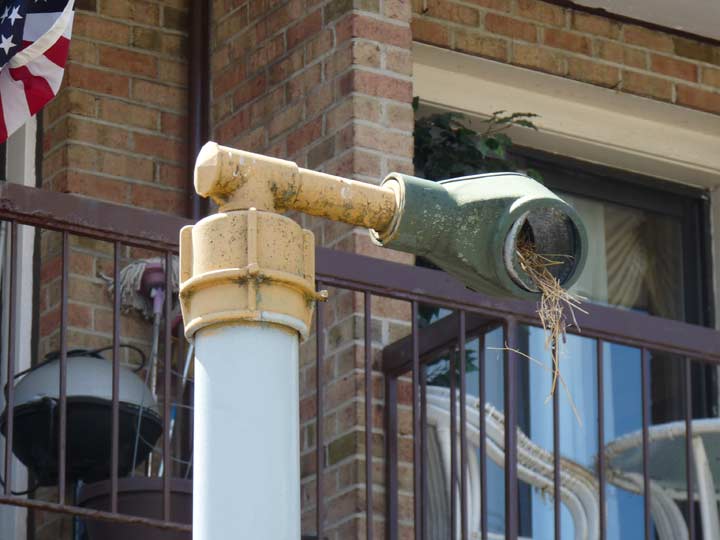 At one point in the 1970s it seemed that every corner in NYC controlled by traffic signals also had these devices (Mosholu Avenue and Fieldston Road), which were mounted on the same posts that the stoplights themselves were. Occasionally, they would be mounted to telephone poles and lampposts, and in midblocks, they would often be hooked up to the massive guy-wired posts that held stoplights on busier corners.

But what were they? These days, birds find them quite handy for nests.

It is an old traffic detector device manufactured by General Railway Signal, in which emitted invisible waves of energy (sonar technology) at vehicles to change traffic signals from red to green at cross streets. NYC used them to measure traffic flow on major thoroughfares in the boroughs to improve traffic signal timing. 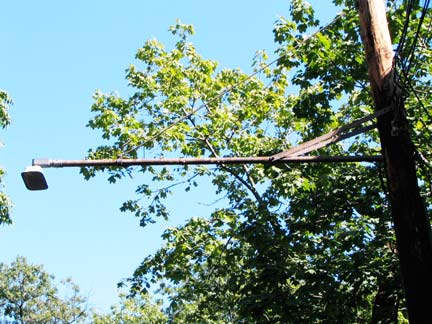 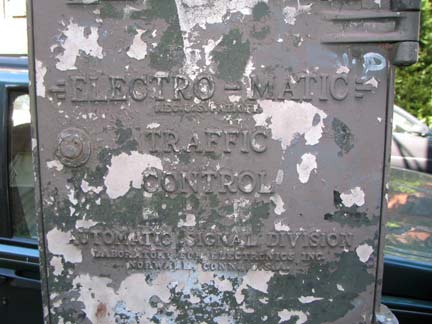 I spotted this device on Giles Place near Sedgwick Avenue. They were rather frequent during the 1960s and 1970s, but I see very few these days. I believe it was a traffic counting device, though I could be wrong. The control box says “Electro-Matic Traffic control Automatic Signal Division.” There seem to be several Electro-Matic companies these days, though none based in Norwalk, CT.

ForgottenFan John Simonetti: I remember my Dad telling me about these devices: more than just “counting devices”, they were used on streets that only occasionally fed cars onto a major, busy thoroughfare.

They were some sort of electronic eye, that would sense when a car had approached the intersection, something akin to the “pressure bars” buried under the asphalt today that perform the same function.

The traffic light on the main road would either stay green or stay green longer than normal until the electronic eye sensed movement (a car approaching the corner). The device would then alert the signal box, which would change the light to allow the car to enter or cross the main intersection. That probably explains why the arm is so long, as it had to reach out over the street to sense the approach or movement of a vehicle.

The sensors were ultrasonic sensors. In the 1960s the city started computerizing the signals on the main arteries in the outer boroughs Brooklyn, Queens, The Bronx, and later Staten Island). As part of this computerization they were used as traffic counters. In other cases they were used to sense if there was a car at the intersection. If there was a car the signal would either change immediately or wait until it was that car’s turn to go.

The problem was that people were stealing them and using them as tweeters in high end custom built stereo speakers. They were replaced by wires in the road, not pressure plates, that performed the same function using induction.

The city did have some detection plates in the pavement, though they were not common citywide. As of a few years ago, there was one somewhere along Riverside Dr. in Manhattan. I can’t quite remember the cross street.

Nowadays, the DOT uses microwave technology for vehicular detection. Typically resembles a small white box, in which is attached to the same pole as the traffic signal. Same purpose as the original 1960s and 1970s technology.

Kevin,
Thank u for ur book! I had to to nypl for a college assignment (35 year old college student here) for my film class. I used ur book to make notes (i promise i did not plaigerize anything!!) for a final project video about nyc. Mine is a little mini tour of some interesting nyc related stuff. 🙂

That pic is a happy reminder of what will happen when us humans no longer dominate the planet.

The rectangular sensor mounted over the roadway is a radar type sensor. The City used these for several years before switching to the ultrasonic type. I was told by a DOT traffic signal electrician that the problem with the radar type detectors was that the installers and maintainers were required to have a FCC commercial radio license.

You were told the truth.

Only military (perhaps all feds?) are exempt.

I remember one of these I would walk under regularly as a kid in Whitestone, and I could swear it emitted a creepy chirp/wave which I could actually “feel” in my head and neck. Am I nuts or was that actually possible?

Yes there was an sonic wave that emitted from the head, when no vehicles were present, the main street light would remain green, it was a demand device similar to the pedestrian push buttons, the difference was the pedestrian walk /don’t walk would turn green and let people cross the street, only the light would change when the sensor triggered by a car would activate. Pedestrian would have priority.

Yes, I remember it as well. There was a unit on Kings Highway, eastbound just before Ocean Avenue.. I remember it having a fast “tic tic tic tic” sound, (like a wind up alarm clock..)