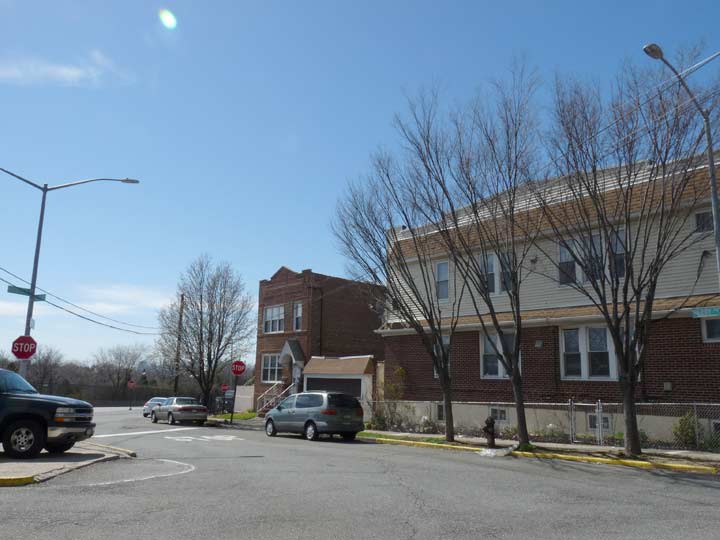 I have always been fascinated by street remnants, such as a small piece of Avenue Y in Bensonhurst here, or a bit of Linden Boulevard over there in Ozone Park. In Maspeth, I’ve known about this exceedingly small bit of Perry Avenue running half a football field’s length between Borden Avenue, the service road of the Queens-Midtown Expressway, and 68th Street… 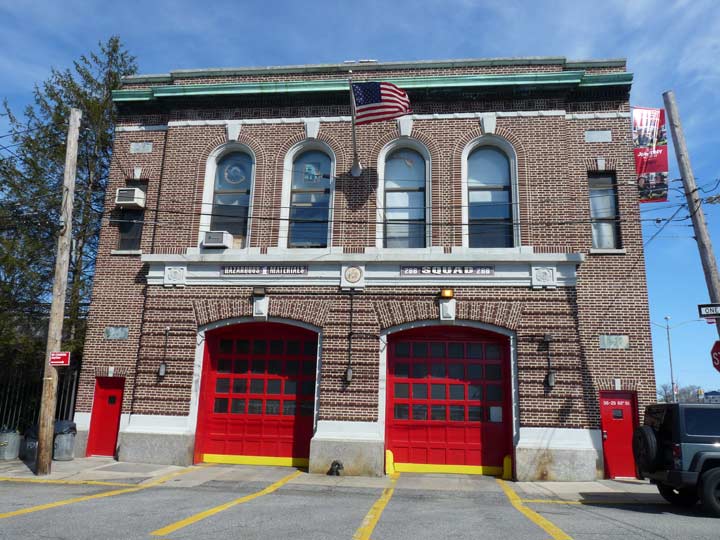 Why is this small piece of Perry Avenue here? Until the mid-1950s, it was the eastern end of the main part of Perry Avenue found south of the Queens-Midtown Expressway, which was bruited through Maspeth and other Queens neighborhoods. It later became Interstate 495, the Long Island Expressway, which reached its eastern limit near Riverhead in Suffolk County in the 1980s. 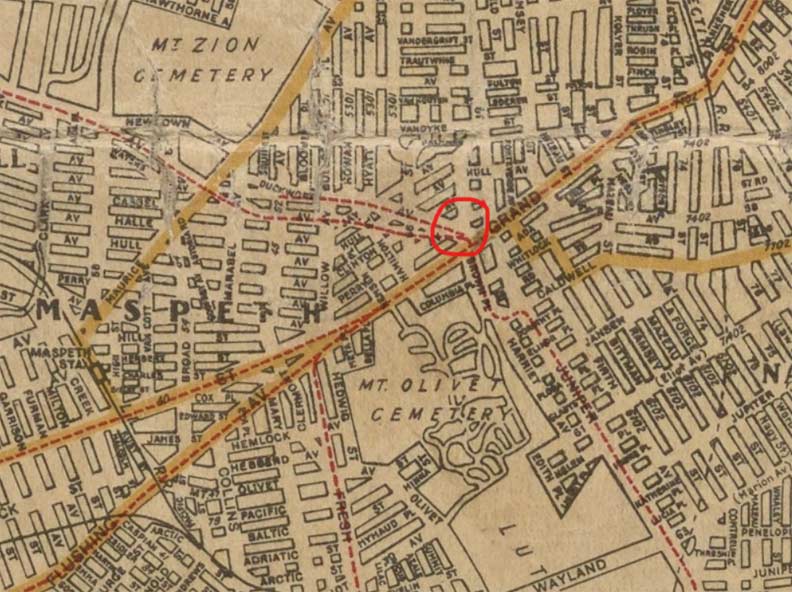 Here’s an excerpt from a Hagstrom Queens map from 1922. Most of the street names on the map are unfamiliar, since most of them were given numbers or other names later that decade; for a time, Queens street signs showed both the new numbers and old names. I’ve circled in red the part of Perry Avenue that was spared when highway engineers plowed the QME through. Those streets west of Willow Avenue, now 64th Street, lost their names and received numbers.

Certain Maspeth streets, corresponding to the oldest part of town, run in a different angle from the overall grid: Jay, Clinton, Hull and Perry Avenues as well as Remsen and Hamilton Places. The Queens Topographical Bureau decided to leave those names in place instead of numbering them, and hence they survive. Their straighter sections west of Willow Avenue (now 64th Street) received numbers.

The vast majority of these streets are lost to history, as few now alive remember them. A few are still around: Caldwell Avenue, Mazeau Street, Maurice Avenue and Grand Street, now Grand Avenue.

Correction on Squad 288. Those companies mentioned didn’t form Squad 288, the former Engine 288 did. In 1998 six engine companies were disbanded and the firefighters reassigned to the newly formed squad companies, located in four of the five boroughs in the same firehouses as the newly disbanded engine companies. They joined Squad 1 as the “jack of all trades” company that worked fires throughout the city.

Second note is you didn’t mention a hugely important fire company that shares its quarters with Squad 288- Hazardous Materials 1, the citywide hazardous materials response company that deals with so many dangers nowadays that the men and women are about as brave as you can find among the firefighters.

This has more on what a squad doesn, courtesy of the captain of Squad 252: http://www.firehouse.com/article/10503173/trics-of-the-trade-the-rescue-pumper-and-the-fdny-squad-concept-part-1

There’s a Hedwig Street on the map, a rare German name that survived World War One. The name sounds like a pun, where do you put you wig?

I lived on Jay Ave for a few yrs. There was a major league umpire that lived around the corner for me when I lived there. There were a few movies filmed around the area back then, “Blue Steel” was one and “Forever Lulu” was the other with Deborah Harry of the band Blondie