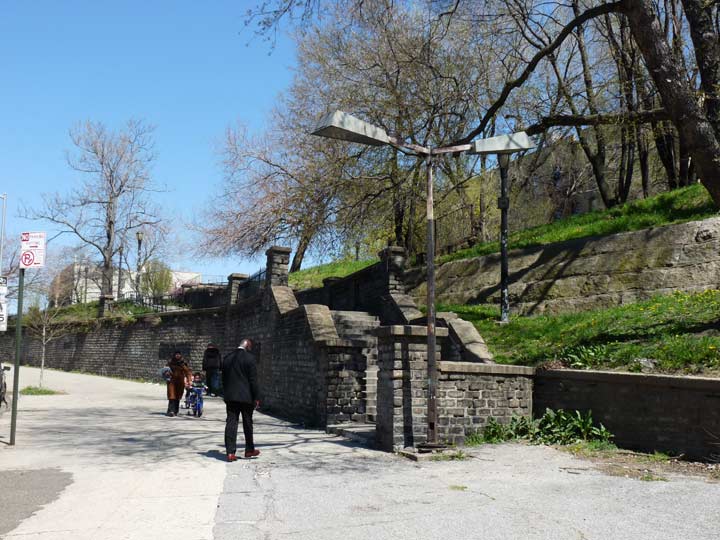 New York’s first water system was built between 1837 and 1842. Prior to those years, water was obtained from cisterns, wells and barrels from rain. Construction began in 1837 on a series of mostly underground conduits that would bring water from the Croton River in northern Westchester County to NYC’s spigots. Amazingly, it took only five years to finish the first connection given the technology available at the time.

Two reservoirs were built in New York City, one between the present-day lines of 6th and 7th Avenues and 79th and 85th Streets, and a smaller distributing reservoir on 5th and 42nd. The former was drained in 1930 and its site is now occupied by Central Park’s Great Lawn. The latter was torn down to make room for the main branch of the New York Public Library, which rose in 1911.

Many of the Old Croton Aqueduct’s New York City remnants are visible in the Bronx and even in upper Manhattan, as are some reminders of the New Croton Aqueduct, built in 1890 to replace the older.

At various points along the aqueduct, above-ground structures known as gatehouses were constructed. Under the gatehouses could be found machinery that assisted in routing and directing the flow of water. In Manhattan, there are remaining gatehouses at West 113th Street and Amsterdam Avenue, built in 1876 (now a day care center for elderly); West 119th Street and Amsterdam, designated a city landmark in 2000; and the largest Manhattan gatehouse, at Convent Avenue and West 135th Street, now being refurbished for use as a theater by City College.

In the Bronx, the Old Croton Aqueduct’s length has been carefully marked and designated. After crossing High Bridge, the Old Croton moved under University Avenue (now Martin Luther King Jr. Boulevard) where it is designated by a center traffic mall. Above Morton Place at the Morton Playground it resurfaces, where its route occupies a pedestrian mall along Aqueduct Avenues East and West. At the Jerome Park Reservoir, above Kingsbridge Road, part of the reservoir’s retaining wall along Goulden Avenue is made from stones formerly part of the Old Croton. And, much of the Old Croton’s path is now a walking trail in Van Cortlandt Park, continuing into Westchester County north of the park for fully 26 miles to Old Croton Aqueduct State Historic Park. Three Old Croton gatehouses can be seen along the Jerome Park Reservoir at Goulden and Reservoir Avenues, Goulden Avenue and West 205th Street, and Goulden and Sedgwick Avenues.

It could be said that the Aqueduct Walk, a linear park originating at the Morton Playground and running along the old aqueduct’s length north along Aqueduct Avenues East and West all the way to West Kingsbridge Road, could be called New York’s first “High Line” since the walk is on a modest embankment for most of its route. In the 1930s the Department of Parks was given title to the land above the now-disused aqueduct and gradually developed it into a lengthy park. I plan to walk its course soon and do an in-depth discussion of what can be seen along its course.

For now, here’s a shot of the entrance steps at MLK Blvd (University Avenue) and West Burnside Avenue. The odd-looking lamp stanchion is a remnant of an auto repair/gas station that once graced the space.

A book “Water For Gotham” describes the history of the Croton Aqueduct.

At that corner, the aqueduct used to go over Burnside on a bridge, later replaced by a siphon (underground tunnel).

I grew up in Croton-on-Hudson, and it’s awesome learning about my town’s history and how it helped develop NYC. The Croton Dam was something I always took for granted (It was always there and I used to get driven over it every day on my school bus), but now I want to go back and check it out and walk the Aqueduct track.

Friends of owls Croton Aqueduct. http://aqueduct.org/ Good resource for maps and history. In Ossining there is museum and frequent opportunities to visit inside the Aqueduct, which is amazing.

I grew up across the street from the Aqueduct at Burnside. Any more pictures?

I’ve actually had the pleasure of walking thru the aqueduct my entire life, lived exactly across the street on University about two buildings from Morton Place, the old stones that you speak of are really astonishing to see it seems as if the walls all have a story deep within….

Just after the Pearl Harbor attack on Dec. 7, 1941, an armed US solder was stationed at the gate house on the corner of Burnside Ave and Phelan Place, Bronx, for a short time. I was almost 9 years old living at 1901 Hennessy Place (across the street) and remember that housewives would bring the armed guard meals.