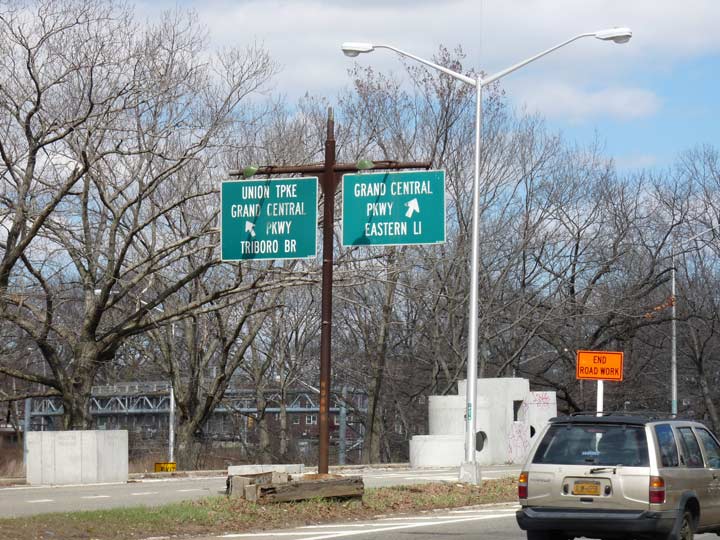 I haven’t got much today except a look at this ancient, rusted signpost left over from the early days of the Grand Central Parkway, built from the Triboro Bridge to the city line (where it changes its name to the Northern State Parkway) in stages between 1931 and 1936, with the Triboro Bridge connection the last piece built.

Union Turnpike, which widened Union Avenue, a rural route connecting Glendale and Hillcrest, was deputized to serve as the service road for both the Jackie Robinson (Interboro) Parkway and the GCP. The sign was hanging in there in 2014, when I got this photo, on the south side of Union Turnpike at 135th Street in the northern end of Briarwood.

I seem to remember signs like this one and many others having black lettering on a white background. I think they were still there in the mid-80s, but I could be wrong.

Yes white background with black letters was a previous standard and some survived to the early 90’s afaik. The marginal drove one is one that stands out in my mind because there was such a convoluted was to access the East River Drive from the Triboro and we passed it every time we went thru there.

It is still there today, and I love those signs! It would be a travesty to remove them.