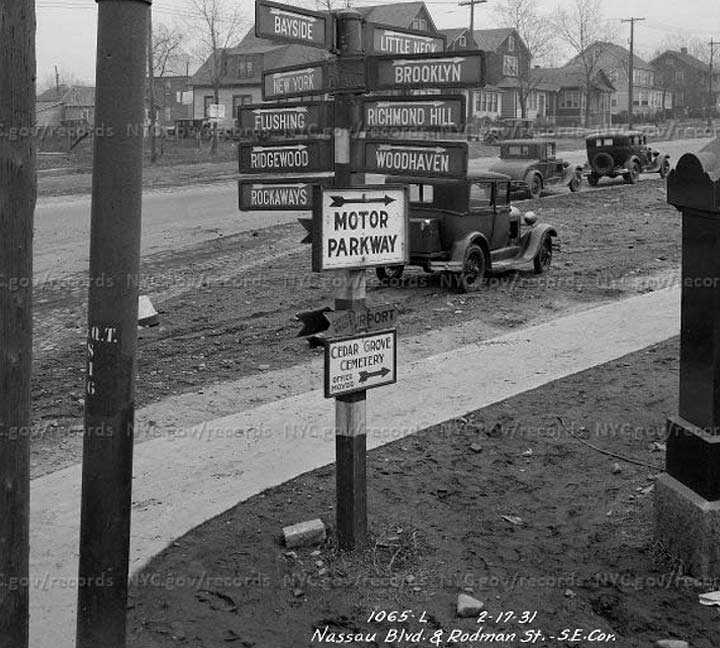 In this photo taken in early 1931, we are standing at two streets that don’t presently exist in the current form, or under the names shown on the photo. In 1931 the city was developing Nassau Boulevard as a through route from Queens Boulevard east into Nassau County, along the line of what was originally 61st Avenue; some of the road is still unpaved and the sidewalks are new. The road did not keep the name Nassau Boulevard for long, though, as pretty early on it was renamed for Horace Harding, a financier and friend of NYC traffic czar Robert Moses. It was widened into the Long Island Expressway in the 1950s, with Horace Harding’s name still affixed to the service roads, and the LIE was built east to about Riverhead in Suffolk County by the 1970s.

I’ve long been fascinated with these directional signs mounted on striped posts–they were chockablock on busy Queens routes in the 1920s and 1930s, then disappeared without trace. This one is especially loaded, with arrows pointing to 9 separate neighborhoods. For example to get to places like Richmond Hill and Woodhaven, you would turn right onto what was then Strongs Causeway (now the LIE), then find a through route south. The signs weren’t especially helpful about what routes to take, but they did get you started.

Other signs and arrows were added on later, such as the Motor Parkway. The original section was built  in 1908 as a speedway, but it later became a convenient auto through route to Ronkonkoma; it wasn’t, however, extended west into Queens until 1926. At first, Nassau/Horace Harding Boulevard connected to the Motor Parkway, but the Parkway was decommissioned in 1938 and the Fresh Meadows Houses were later built where they crossed.

The final sign refers to the nearby Cedar Grove Cemetery, the gates of which were a block or two away, and still are on the south LIE service road, Horace Harding Expressway South. The cemetery was founded in 1893.

I live on the westbound side of Horace Harding where the Clearview Service Rd bends to meet it.
The Motor Parkway has long fascinated me. I was at a presentation recently by Howard Kroplick, the North Hempstead town historian. He also has a cool website, vanderbiltcupraces.com. I’d asked him if he knew how the Fresh Meadows terminus had met Horace Harding (they’re very close to each other), but he wasn’t sure exactly. Your explanation makes sense. Is there a map or other source that anyone has seen showing the two roadways — the Motor Parkway and Horace Harding — connecting? The Motor Parkway was closed in 1938, only 12 years after the completion of the western extension. Robert Moses did not want anything to do with Willie K. Vanderbilt’s Parkway, sadly.

That sign with the arrow pointing to NEW YORK reminded me of the signs on southbound 21st Street in Astoria ( and I presume on other streets )that said “TO THE CITY”. Sometime in the late 50’s I recall someone wrote a letter to the Star- Journal saying the signs were offensive since Queens was in The City.

There is only one “The City”, and that’s New York City! This from one who was born and raised in Queens…..I guess there were snowflakes even back then!

This is priceless. WOW!!! Keep up the amazing work at FNY

I wouldn’t be surprised if a recent image of that place no longer has that sign, which was probably taken down when the DOT transformed that area.

Thanks Kevin for the picture and story. One thing I find quite interesting is how those community destination signs disappeared into oblivion and were never resurrected into modern signs. For example, the Long Island Expressway exits in Queens merely have numbers and street names but do not include the name of the community. Conversely, as soon as you enter Nassau County all exits have numbers with the name of the street, with most containing the village, hamlet or city of destination.

I am sure this had to do with the relatively rapid transformation of immediately post war Queens from a collection of small towns and undeveloped farmlands, into an area of densely developed urban neighborhoods and dense suburban ones.

Lastly, I also noticed that it was not mentioned that from 1939- 1940, Nassau Boulevard was named World’s Fair Boulevard during the duration of the 1939-1940 New York World’s Fair.

Were motorists expected to read all the signs while driving by? Either they had to drive very slowly, or they needed fast eyeballs!

One of the coolest posts ever.

At the bottom of the signs there is an arrow pointing to an airport.
Can’t make out what airport. Any clues?

Says which in the piece.

Looks like a piece of Rodman Street still exists between 59th Avenue and Horace Harding westbound (according to Google Maps anyway). So maybe this intersection ain’t so extinct after all! (Although I’m sure it’s been “moved” somewhat)

I have a question/request for anyone who reads or posts here and is interested in Queens history. About one mile due east of the sign in the photo, there exists today the Queensborough Hill Branch of the Queens Public Library. It is just a few feet north of the intersection of the LIE North Service Road (aka Horace Harding Boulevard), and Main Street. Prior to 1979, there was, on a portion of the footprint of the current branch library, a much smaller buidling which was the QBHill Branch Library. In those days the roadbed of 142nd Street extended, prior to 1979, all the way to the servie road. In 1979-80, that short section of road was closed off, the old branch library torn down and the new, larger branch constructed. The old library had been, in essence, built on a traffic island. My request: does anyone know where I might find a photo of the old building? My question: does anyone know what the old branch building was before it was a library. I have heard two different recollections. One old-timer recalls that it was a Child Health Station operated by the NYC Health Dept. Another recalls that the building was some sort of waystation related to the Worlds Fair at Flushing Meadow Park.