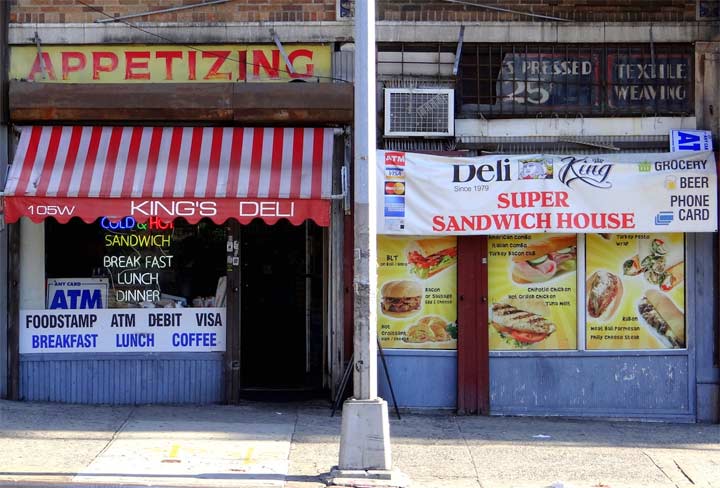 ForgottenFan Ben Hagen passed along photos of a pair of decades-old ads that have been in view on West Kingsbridge Road west of University Avenue that have apparently been in view for a few years.

“Appetizing” here is actually a noun and the word can be found on many Jewish delis around town.

An appetizing store, typically in reference to Jewish cuisine, is best understood as a store that sells “the foods one eats with bagels.”

“Appetizing” is used as a noun by itself to refer to the type of foods. Appetizing includes both dairy and “parve” (neither dairy nor meat) food items such as lox (smoked salmon), whitefish, and cream cheese spreads. The foods are typically eaten for breakfast or lunch and, based on Jewish kashrut dietary laws, include no meat products (kosher fish products are not considered meat).

The simplest distinction is that an appetizing store is a place that sells fish and dairy products whereas a delicatessen sells meats (but not dairy products if is a kosher deli).

Over the years, it’s likely a number of different businesses have occupied the space, and it happens that a deli is here now, though it’s likely not strictly an appetizing deli. If it is, let me know. 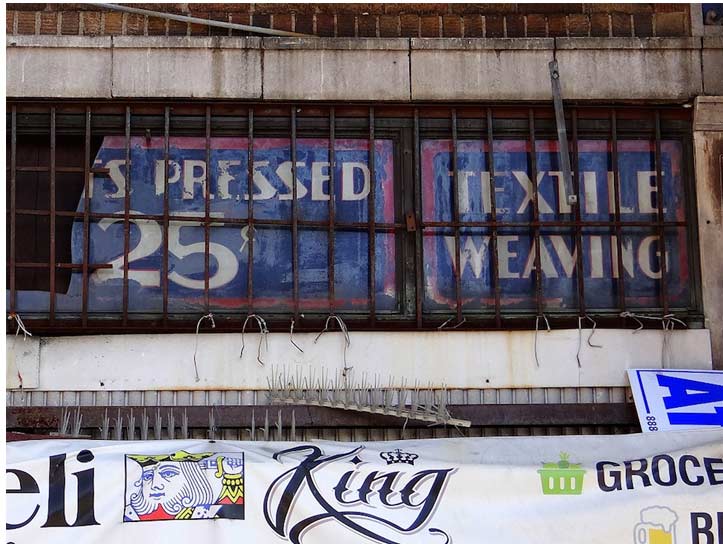 Ben Hagen reports that according to city records, the building here dates to 1926, and the price given for having pants or suits pressed, 25 cents, seems appropriate for that date. The signs seem to be blue vinyl with handcrafted white lettering.

As a former bus operator for NYCTA, who passed that spot likely hundreds of times while driving on the BX3 , BX32 and the BX9, I can say without any doubt, that sign must have been recently revealed. Believe me, I would have seen it when I was working at Kingsbridge Depot from 1993 to 2003.

Gary is right, the signs have been revealed no earlier than 2014. Here is the street view for June 2014:

The installation of scaffolding probbaly forced most business in the sidewalk to remove most awnings, revealing older signage. It appears that King´s Deli has not gotten around to put up the ugly plastic again.

I presume the modern day deli is indeed not an appetizing deli, as the 2014 signage does not use the word ‘appetizing’, ‘kosher’, etc.

I live by here and I just checked. This is a bodega complete with grey bodega cat.

No trace on the inside unless you call a droopy drop ceiling from the 60s historic.

I used to live in the building where these signs are located from 1981-88- 2685 University Ave was known as “The Towers” because of it’s massive size and six elevator stacks- I have a photo of the uncovered “EISDORFER FURS” sign that is on the northeast corner of University and Kingsbridge taken in the summer of 2016 when the signage was being replaced by Verizon sign. Let me know where I can send it if you are interested.