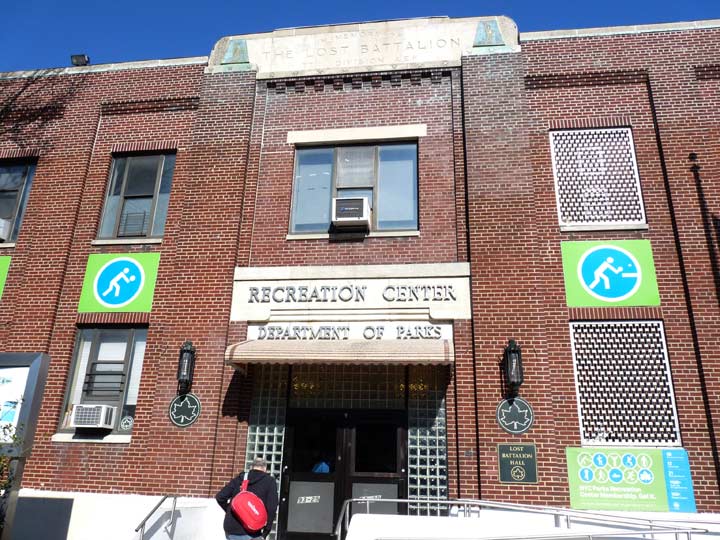 Lost Battalion Hall and Lost Battalion Park, between Queens and Junction Boulevards just south of the Horace Harding (Long Island) Expressway and wedged between the Queens Center and Rego Center shopping malls, are named for World War I American patrols numbering about 550 soldiers, who became separated from the rest of their division while attempting to liberate Charlevaux, France from the Germans, from October 3 to October 7, 1918. The patrols were only able to communicate with their division by using carrier pigeons and relay messengers, while the Germans had the advantage of telephone lines. Despite losing 107 men, the companies successfully held off the Germans until the 77th Division arrived with reinforcements.

The present Lost Battalion Hall was constructed in 1939 by the Depression-era Works Progress Administration for $100,000 as a firing range and drill hall for the Queens Veterans of Foreign Wars (VFW) and the American Legion. It came under NYC Parks administration in 1960; by 1962, it became a Parks recreation building (with the VFW moving to upstairs offices) and a new playground was constructed next door. New renovation and additional park construction was done in 1998.

My parents spoke of attending dances in this building during the 1940s, having arrived there via the then-new Queens Boulevard subway. IIRC they mentioned a roller skating rink was next door.

A wonderful place to go dancing on Saturday nights in the 1950’s.

I remember a sign in the mezzanine of the IND Woodhaven Blvd. Station pointing to the correct exit for the Lost Battalion Building. Now I know what it referred to.

In the 60’s, they had some gymnastics programs for teens.

One of if not the most famous people involved in the whole Lost Battalion situation was Eddie Grant, former New York Giants 3rd baseman who was killed in action during the search for the Lost Battalion. He was immortalized at Polo Grounds with the longstanding memorial in dead centerfield.

This battalion was extremely important as they created a pocket of resistance to the advancing German forces helping to slow down and ultimately stop the advance. The last ditch effort from the Germans failed, the battalion saved thousands upon thousands of lives at a loss of mover 350 men.

.
.
Pulled off my first kip on the high bar in the gym there.

Hey PegLeg guy:
Obviously from Stuy–me too, 1967, a not so hot gymnast.
Ron

I spent a lot of time there during my high school years (1962-1966) days I lived at the corner of Saunders St and 62nd ave, which was directly across Queens Bvd. The main floor had 3 basketball courts and a full set of gymnastics stations (parallel bars, high bars, pommel horse, cetera). Downstairs included pool tables, ping pong, a weight room, a boxing ring, speed bags, and a senior center area on the West side.
To the East of the building at the corner of 63rd avenue was The Boulevard Nightclub.

As a retired military servicemember it’s great to know the history of “Lost Batallion” .

The New York Knicks would practice at Lost Battalion Hall during the mid 1960’s. It did not occur often, but it was the first time I saw Phil Jackson, and Mike Reardon.

Started working out here soon after we moved to Rego Park in 1967. Yes, the Knicks would practice here but basketball was not that popular a sport until the early 1970s so no big deal.

learned how to box in the basement in the early seventies

I learned to box and wrestle their in the mid 80’s.

I was kicked out of Lost Battalion HALL more than once when knicks came to practice. in the late ’60s. We came from Rochdale to play, I remember them standing around shooting with Cassie on the left and Bradley doing tight little spins and that shot of his. I think we got kicked out when the practice got formal.

Played basketball there in the 60’s

Used to go there as a kid in the 60’s to play basketball. Willis Reed and Cazzie Rusell were room mates in a nearby high rise and would shoot around there
with the kids! Great place and memories.