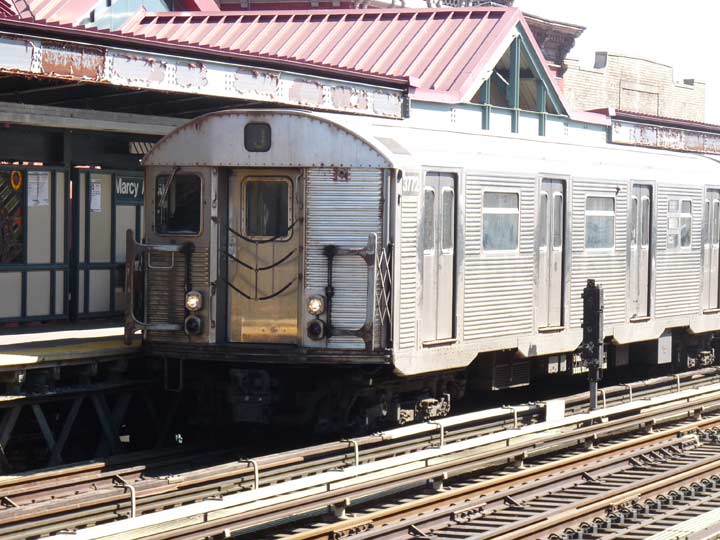 I was doing some midweek loitering on the Marcy Avenue platform in Williamsburg, watching the trains go by. I can do this because over the past five years the copy editing-proofreading market has dried up (as well as the willingness of employers to hire people over fifty) and I have been unemployed for lengthy stretches of months at a time. But enough about my complaints.

The J is the Most Interesting Subway Line in NYC because of its rich mix of subway cars and also that it travels on an el for all but its Manhattan stretch and 3 stops at the end of the line in Jamaica. You will not only find newish R-160 cars from the early 21st Century but also R-42 cars built by the St. Louis Car Company dating from 1969-70 and R-32 cars, shown here, that go back to 1964-1965, built by the Budd Company of Philadelphia. R-32s also serve the C and very occasionally, the A lines found on 8th Avenue in Manhattan.

They were originally referred to as “Brightliners” because of their corrugated, stainless-steel exteriors. From 1988-1990 all serving R-32 cars received makeovers that most notably included a changeover from roll signs to Luminator “flipdot” electronic route signs, making the R-32s the initial pioneers in electronic route signage. New R-143, R-160 cars introduced since 2000 have also employed electronic line markers. I’m told new cars to be introduced  during the upcoming decade will bring back the roll signs with the large colored bullets, but this time in electronic form.

According to railfan James Greller, they often cited for their superior durability and craftsmanship, along with the structural reinforcement done to their bodies during the GOH period; four other B Division models built after them have been mostly or completely retired. wikipedia

Long live the R-32! Not least because they’re complete iceboxes in the summer.

Always liked the R32s. When brand new in September 1964, an eight car consist made an inaugural trip from Mott Haven in The Bronx to Grand Central terminal, using the NY Central’s route (today Metro-North). That moved required an adjustment to the third rail shoes to allow the train to operate using NY Central’s under-running third rail. The NY Times reported the event it its September 9 edition.

The R32s today, along with 50 R42s still in service, are the only cars left with the front door railfan window. All other car classes have the full width cabs.

I remember the Marcy Ave station and used it many times when I lived back there..There was a clump of light snack eateries under the station…hot dog, pizza, etc…Also The Williamsburg Bridge Plaza bus depot….

The very first time I saw the R-32’s was testing on the Sea Beach line test track back in 1964. I was rail fanning, riding AB’s on the Sea Beach when we pulled into the Fort Hamilton Pkwy. station and on the express tracks were the shiniest subway cars I’ve ever seen.

I was only thirteen year old at that time and was at the station almost all day long, watching the R-32’s going back and forth while BMT Standards (A-B’s) were holding down service. I don’t recall any Triplexes running that day. I was too transfixed on those Budd beauties !