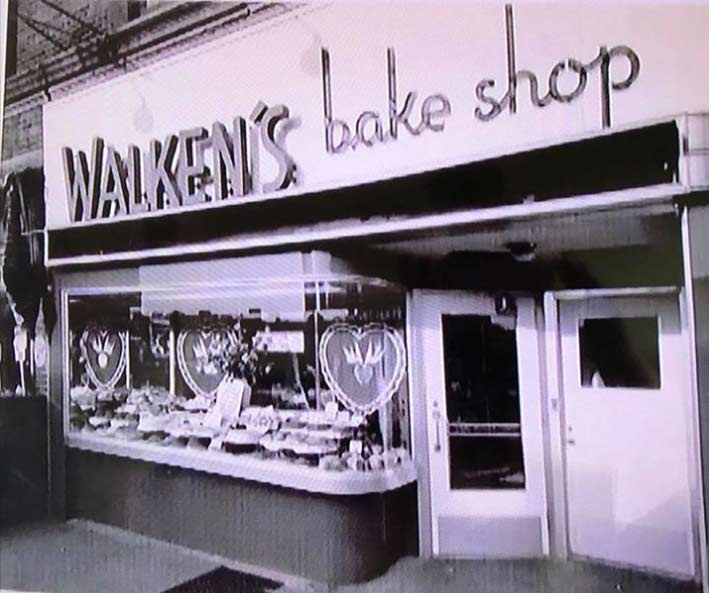 I did a Forgotten NY tour in October 2017 and had to make a detour around this stop, so I’ll do it here. Paul and Rosalie Walken opened a bakery at 29-13 Broadway in Astoria in 1931, and the business thrived for several decades. The family had three sons, Kenneth, Ronald and Glenn, and purchased a house in Bayside. The three sons had the showbiz bug and made their way to early TV soap operas such as The Guiding Light and Secret Storm. However, while the other two sons went on to other endeavors the youngest, Ronald, met with the most success. Changing his name to Christopher, he became a major Hollywood actor and dancer, appearing in The Deer Hunter, Biloxi Blues, Pennies from Heaven, Pulp Fiction and many more. Rosalie passed away in 2010 at the age of 102.

In this New Yorker article, Walken discusses his Astoria roots. 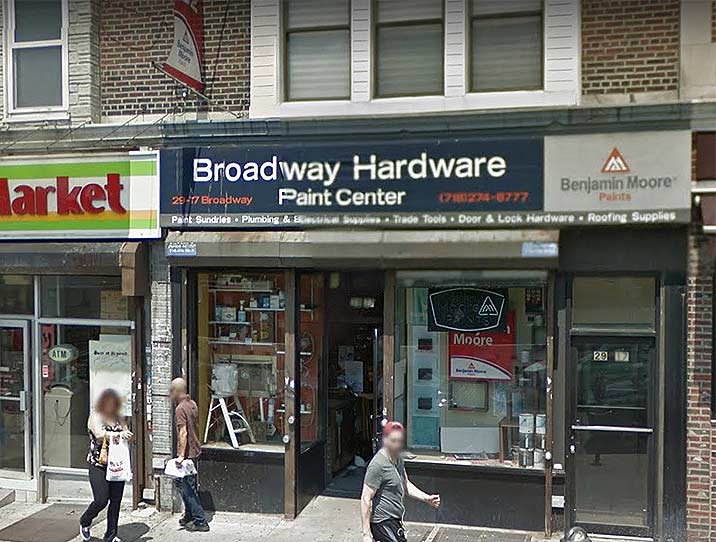 Walken’s Bakery survived until the 1980s after moving next door to 29-17 Broadway. Today, a hardware store occupies the site.

STREETS THAT SHOULDN’T HAVE THEIR NAMES

My Polish ancestors had a bakery, during the same time period, not too far from there. It was called “Old Reliable Bakery” located at 193 150th Street, Jamaica, Queens.. It was owned and operated by the Mytko family.

From the early 1970’s until they closed, I would regularly stop at Walken’s in the morning to pick up baked goodies for my office’s coffee breaks. I remember them fondly.

My mother was a good friend to Rosalie and Paul Walken. When I was born, my mother named me Rosalie, after her dear friend.

As a kid in 1959, I grew up by Queens Plaza. Every Saturday my mother, me, and my two sisters walked over to Broadway, with our shopping cart, to do our shopping. The Walken Bakery was our favorite stop and we always went home with a pie or a loaf of fresh sliced bread. This tradition, of many years, is one of my fondest childhood memories.

My mom just recalled a story as a child growing up in Astoria
circa 1940’s-best bakery in town Walken’s -everyone knew each other. Mom remembers her free black & white cookie & young Christopher the up & coming actor’s pics proudly posted❤️

Walken’s Bakery had the very, very very best jelly doughnuts. I grew up in Queensview West and would catch the El train to New York. This bakery was located right before you got to the El. Good memories!

My mother and sister both worked at Walken’s Bakery. The Walken’s were a very nice family to work for and they have fond memories of that time.

My favorite cake of all was one that was, I believe, made with ground walnuts in a loaf pan. It had one layer of raspberry jam & a dusting of powdered sugar. How I’d love to have that recipe!

My mother worked there also what was your sisters name

What a great bakery!! My mother Anita worked with Lydias mother, and I at 16 worked there and worked with Ronald (Christopher) Walken. That was a very nice family!!@

I was friends with the sons.
Chris (Ronald) was jealous of
Me because I could act and played several musical instruments he was always
Looking to argue and not talk
To me. One day he broke my
Guitar which resulted in me
Hitting him till he cried like
A little girl. But after that his
Family paid me for the guitar
And I promised not to hit him.
He now is my friend and respects me for as he knows
There could be a smack in his
Face anytime.

YOU’RE the jealous one…A-Hole. What a moron.

Their chocolate covered Cowbells were the best,,,,

Their cheese cake was tops!

We always celebrated my birthday on Thanksgiving and always got my cake from Walkens every year. My favorite was the mocha cake. How I would love to have that again. Great memories!!!

My husband was from the neighborhood and took me to Walken’s. Great bakery. Fun times!

I am 100 years old now and still remember Walken bakery My husband had a business in Astoria I used to stop there for rolls and bread. Never forgot how good they were

We used to stop by every weekend and get a dozen of their Kaiser Rolls as well as assorted pastries. I also remember Walken’s Café opening across from C-Town Supermarket on Broadway back in the 80s. Great cakes and friendly family.

I knew the Walken’s in the early 7o’s. Wheh I got married and we got an apartment on 29th street off Broadway. We had a red Doberman Pinscher called Beauty. The Walken’s had a black Doberman and our dogs used to play in the back of the bakery. They were wonderful people. I never met the sons. I loved their Black Forest cake.

They never had a black Doberman and the dogs they had were never at the bakery. The dogs stayed in Bayside. Must of been someone else’s dog.

My great grandmother and great aunts lived a couple of blocks from Walken’s Bakery. As a kid growing up on Long Islamd In the 60’s and 70’s, every Sunday my mom and I would go to Astoria, and my great aunt and I would walk over to Walken’s Bakery to get a box of cookies and cannoli. I remember Mr. and Mrs. Walken’ had a picture of Christopher in the window. The cannoli and cookies were the best!!

The Walken’s never owed a doberman pincher. They never kept any animals at the bakery. Their dogs were in Bayside. Also they never had cannoli’s.

My mother worked in the bakery store. Being Scottish she had made friends with Rosalie Walken who was also Scottish and the both came from the same area of Scotland less than 20 miles apart. When I came along in 1951 I was named Glenn, after, you guessed right Glenn Walken.
Mr Walken employed a German baker called Carl ( or Karl ) who my mother possibly had an affair with.. I used to get dragged along to talent auditions with Ronnie who was about 6 years older than me. I had zero talent but Ronnie went on to better things.
I remember driving ( age 6 ) along the Grand Concourse in the Bronx sitting on Carls knee. I wanted to drive like the Keystone Cops!, on a popular B&W television program.
It’s all just memories

I was born and raised in Astoria on 41st and Broadway, right around the corner from Steinway St. from 1960-1980. The best thing was there was literally a bakery on every corner whether German, Italian or French. My family always went to Walken’s for birthday cakes and the like. I believe the bakery was close to the Hoffbrau House German restaurant.

I used to love going to Walken’s growing up in the 70’s! The treats were always great, but my favorite days were the ones when they brought their two black dobermans in. They were the sweetest dogs and I have great memories of playing with them! Miss that place!!

My father worked there as a baker before it closed. He used to bring home some great baked goods from there especially their croissants. I can still remember the
cheesecake which was delicious. When he passed I remember finding a picture of Paul, Rosalie and Christopher. They were really good to my father.

After my mother left Walkens to do clerical work in a hospital we still made the journey from Townsend Avenue and subsequently Clay Avenue to periodically visit the bakery. Our dentist was Dr. Pelegrino ( also the dentist of the Walken family ) and hid dental premises were just a short stroll from the bakery. So every dentist trip turned into an extended visit to the bakery.
Karl, the baker would set me up through the back with a huge, maybe 5 gallon tin of cherries and an empty tin too. He told me to put every cherry, one by one, from the full tin into the empty tin. There I stood on a stool transferring the cherries one by one. I thought I was doing a really important job for the bakery. Never really occurred to me at the time that is was just a tactic by Karl to keep me busy while my mother talked to him, and OH MY GOD, she could talk for hours. Anyway I just worked away and Karl always paid me $5 dollars when we left. Just think about it. A five year old kid from a working class area of The Bronx in 1951 with five bucks of my own money. Thanks to Karl, I was the KING of The Bronx. lol
Not long, maybe 2 years later I was sent on my own, 12 hour non stop flight New York to Prestwick airport for a summer vacation at my grandmothers house in Scotland. I never knew my mother was divorcing my father and 60 years later here I am. Still in Scotland. I’m beginning to pick up on the fact I might never be going home to New York ever again. Whatcha think?

Does anyone have the recipe for their chocolate frosted cake?

Anyone from Most Precious Blood School or 34th and Broadway?

I also loved Walken’s Bakery. Everything we bought was delicious! I lived on 33rd Street between Broadway and 31st Avenue. I love it there.

My father used to bring home the most delicious crumb cake and tea biscuits from Walken’s on Sunday mornings in the ’60s the ’70s. He would usually visit 2 or 3 Astoria bakeries, but what he bought at Walken’s was always my favorite. Wish I had a recipe for those tea biscuits!

My grandma lived upstairs when she was a little girl, and babysat for the boys 🙂

Oh my goodness. The BEST bakery ever. My mother used to bring home these custard filled donuts with white icing on Saturday morning. I wish I could have one now…lol.

In old photos Litchenstein’s Hardware is at the location of today’s Broadway Hardware store, and walkens Bakery is to its left. I assumed 29-17 Broadway was always a hardware store, but surprisingly Walken’s bakery , as written above, moved to this spot in its later years.