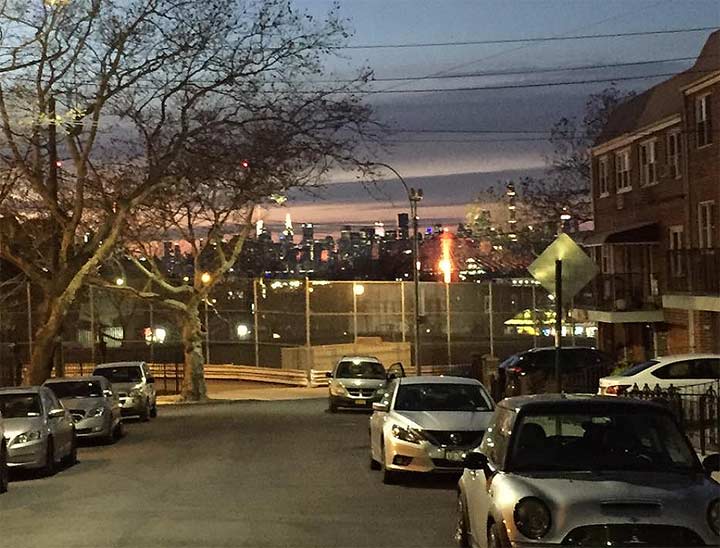 Tonsor Street runs from Metropolitan Avenue at Andrews Avenue three blocks southeast to Greene Avenue in Ridgewood. Toward its north end it makes a dramatic curve on a hill, permitting a view of the Shining City. I had always been a bit puzzled about the name; I know that “tonsorial” is an adjective for barbers and their art, but I knew that couldn’t be it. It so happens that Tonsor Street and Grover Cleveland High School, which it runs past, are connected.

The first principal of Cleveland High was Charles Augusts Tonsor; he was also a member of Ridgewood Savings Bank’s board of directors, and wrote several historical treatises on the neighborhood. 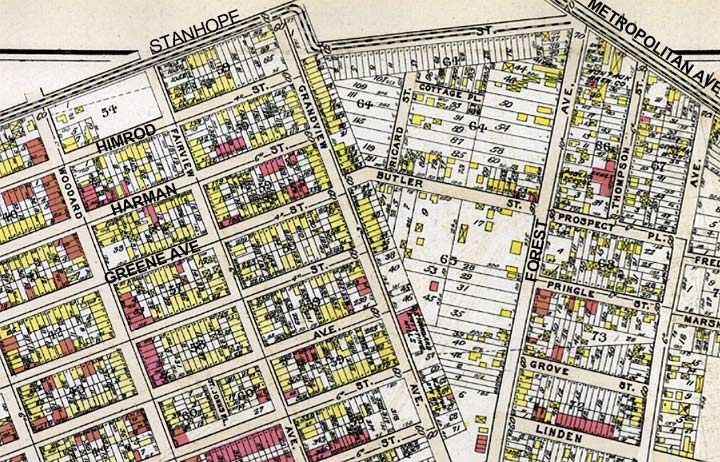 This map (to which I have helpfully added some street names) shows the area of Ridgewood where Tonsor Street is located in 1909. Neither Grover Cleveland High School nor Tonsor Street existed yet: notice that their locations show a largely undeveloped triangular space between Stanhope Street, Grandview Avenue and Forest Avenue.

Later, streets like Harman, Greene Avenue and Bleecker Street would be extended through past Forest Avenue. The two small streets, Butler and Ricard, would be retained. A new short street was laid out parallel to Grandview Avenue and named Amory Street. I would presume that it would be renamed for Tonsor after the educator’s death. The Amory name survives in nearby Amory Court, which runs for a block between Metropolitan and Grandview at Linden Hill Cemetery, which is to the north of this map’s location.

Only Bleecker (at a previous time spelled “Bleeker” on some street signs) was extended past Forest Avenue. Bleecker took over the eastern-most piece of Butler Street, then Prospect Place and Frederick Street (barely on the map above) were renamed to extend it. This can be seen in the 1915 Queens Atlas at http://www.historicmapworks.com/Map/US/3063/Plate+021/Queens+1915+Vol+2A/New+York/ .

There’s a reason for that though, Bleeker past Forest was supposed to be Butler. The two intersect at an angle with Bleecker curving and taking over where Butler should have continued.

A little more to add. All the remaining streets south of Bleecker to Putnam Avenue were run thru to Fresh Pond Road or Traffic Avenue, with some being renamed. Some oddly-angled or offset intersections were created at Forest Avenue, due to two street grids meeting there.

I wish you had included the next plate to the north to show the entire area as most of what what you mentioned, the curve in the street and the school, are actually on that plate not the one shown.

It’s odd and rare, but the two together would show the full story about what makes Tonros so special.

as a child in the late 50’s, the north/east side of Tonsor was largely undeveloped. As a very young child I remember a large vacant area with a “farmhouse” across from GCHS. I was told that it was a haunted house and being +/- 5 yrs old, I absolutely believed it and kept my distance. By the time I started HS there the old “homestead” had been divided and new housing well underway. I also remember the lot on fairview between himrod and stanhope being 3/4 of a whole block being developed about early 1960’s. Another major move by the city is when they bought (or whatever) the entire block bordering woodward to fairview and madison to woodbine to create what we called 93 park. Again very young, I remember rows of largely woodframe houses sitting empty waiting to be demolished. This was also around the 1960 era and the last major ridgewood development that I remember.

I remember the haunted house from the late 50s also. It reminded me of the house the Minsters lived in on TV.

Remember those old houses well. My mother was a teacher at Cleveland from 1948 to 1977

This is fascinating. Would you know anything about what happened to a small segment of Covert Street that appears on 1880s maps of Ridgewood (then part of Brooklyn) and runs off Seneca down toward the water? It is definitely not there now.