LITFAßSÄULE: German Design at the Tunnel

Befitting of its status as a world-class city, New York has received plenty of exotic street furniture over the decades: an ancient Egyptian obelisk, A Roman column from Jordan, and a lamppost from Hamburg, among other objects. In the Financial District near the portal to the Brooklyn-Battery Tunnel is a cylindrical column that is familiar to German and French visitors: an advertising column maintained by the nonprofit Downtown Alliance. 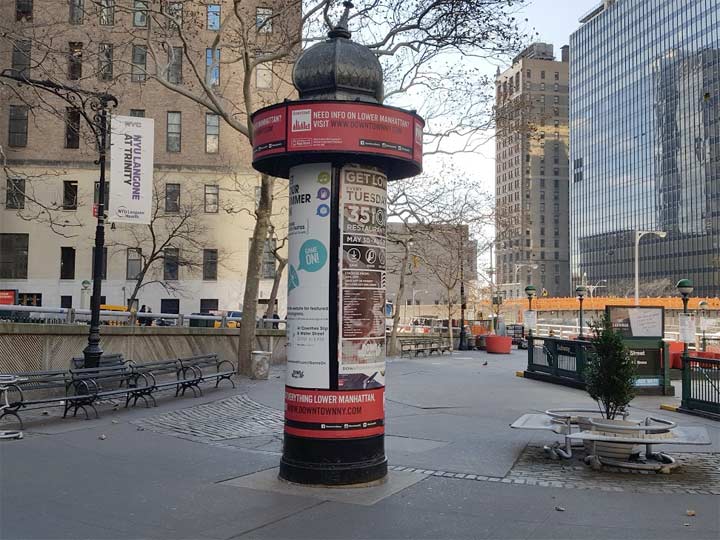 Known to Germans as the Litfaßsäule after its inventor Ernst Litfaß (pronounced LIT-fahss), it was introduced to Paris by advertiser Gabriel Morris, and so his compatriots call it the Morris Column.

New York’s own advertising column was first installed around 1999 at Zuccotti Park(Liberty Plaza) by the Cooper-Hewitt National Design Museum. When construction began at Liberty Plaza Park in early 2004, the kiosk was temporarily moved to Bowling Green Park for less than a year. By the end of 2005, it was relocated to its present site at Elizabeth H. Berger Plaza. The staff at Downtown Alliance refer to this French object as the Parisian Kiosk, but this particular column’s place of origin is uncertain. 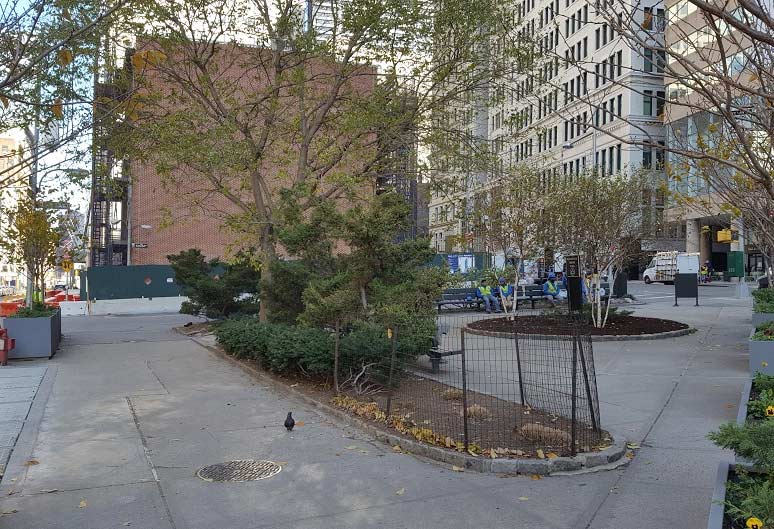 At the northern end of this park is Edgar Street — the shortest through street in the city. In the early 20th Century, this section of Downtown Manhattan was home to a sizable Lebanese and Syrian immigrant population. 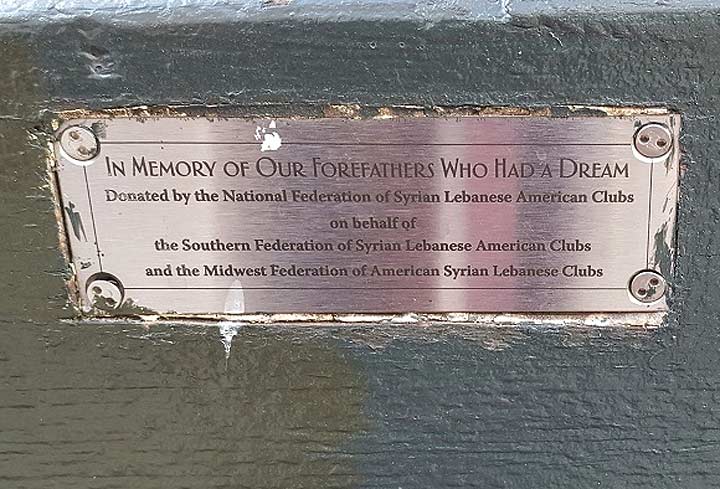 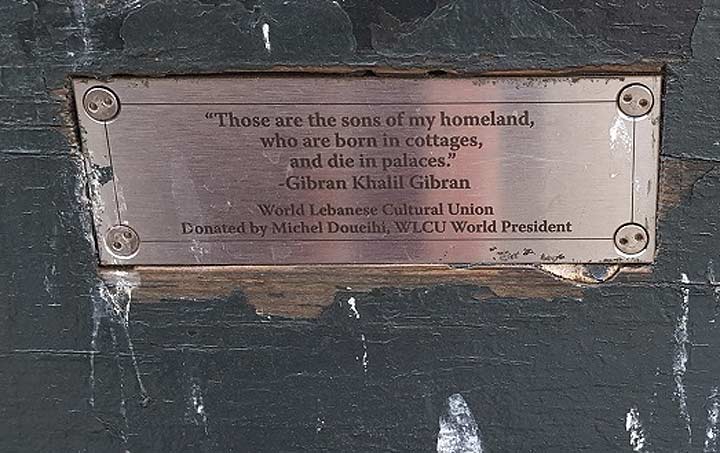 Their memory is preserved on bench plaques in this park.

As for the park’s namesake, Elizabeth H. Berger (1960-2013) was the president of the Downtown Alliance and an advocate for uniting the two traffic triangles into a single park. 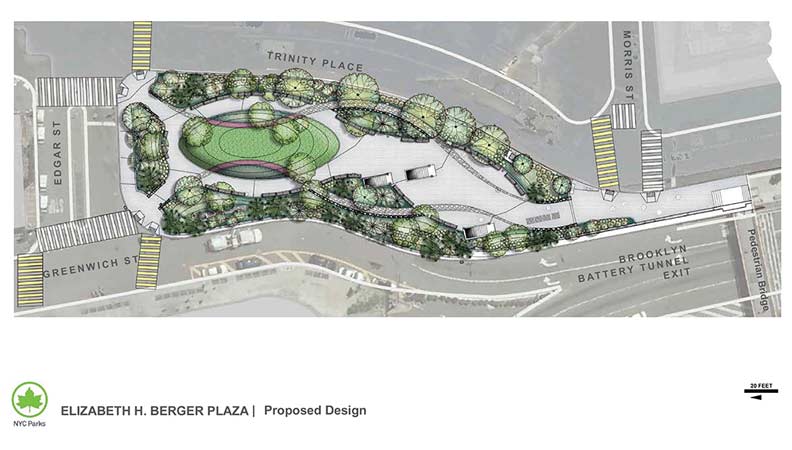 The park in which it stands is expected to undergo a transformation. Presently comprising of two traffic triangles, there are plans to merge them to create a larger park. Its history goes back to the beginning of New Amsterdam. At that time the western shoreline of Manhattan was here.   In 1787, the city approved extending the shoreline by 60 feet with Greenwich Street as the new water’s edge. In 1808, Manhattan grew by another block with Washington Street as the new shoreline. In 1830, West Street became the new frontier… until Battery Park City in the 1980s.

Looking at the plans, it is unclear whether the Morris Column will be preserved at its current location. Forgotten-NY items tend to be located in proximity to each other. 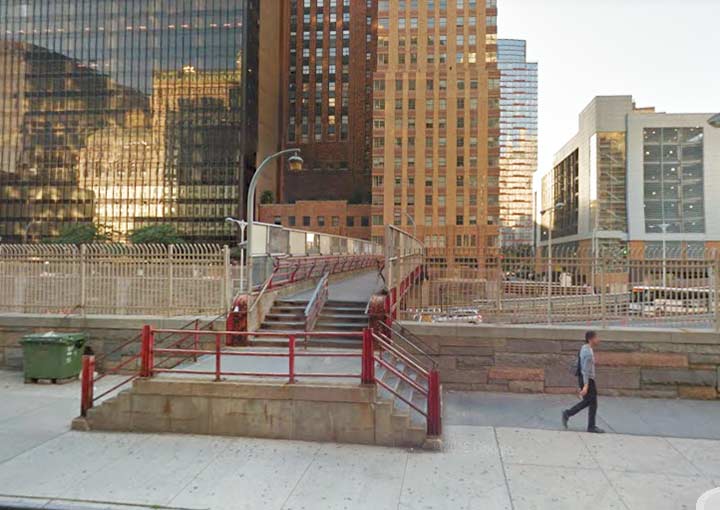 A few feet away from the city’s sole Morris Column is the Morris Street footbridge across the tunnel entrance. This Morris is unrelated to Gabriel Morris. This bridge is being replaced.

The area is familiar to my family. Across this footbridge was the office of NYANA which assisted thousands of Soviet Jewish refugees in the years following the collapse of the USSR. Though my family landed here via JFK Airport, it seemed historically appropriate that we were welcomed into the county in an office overlooking Ellis Island and Lady Liberty.

I forgot to add that among the exotic street furniture pieces, NYC will soon receive a Chinese gate for Eighth Avenue in Sunset Park. Unlike the Chinatowns of other large American cities, we haven’t had one… until now.

The column had a bit of fame as it appeared in the movie “Men In Black II” in 2002, acting as the escape route for the characters Agent J and Agent K.

It’s about time we get a chinatown arch for at least one of the chinatowns. Very good news.

When I was last down that part of town (September), the footbridge hade been demolished to the point that only the span over the Brooklyn-bound tunnel entrance was still there.