I have lived in Little Neck, Queens since July 1st, 2007, following 14 years in Flushing. I spent 35 years in Brooklyn to begin with, so in 2029 I’ll have attained equilibrium between the two boroughs, if I last that long. Queens is so vast that there are large portions that still remain The Undiscovered Country for me. One of those portions is undiscovered for me no longer as I finally did a bit of exploration there. And it was less than a mile away from me! 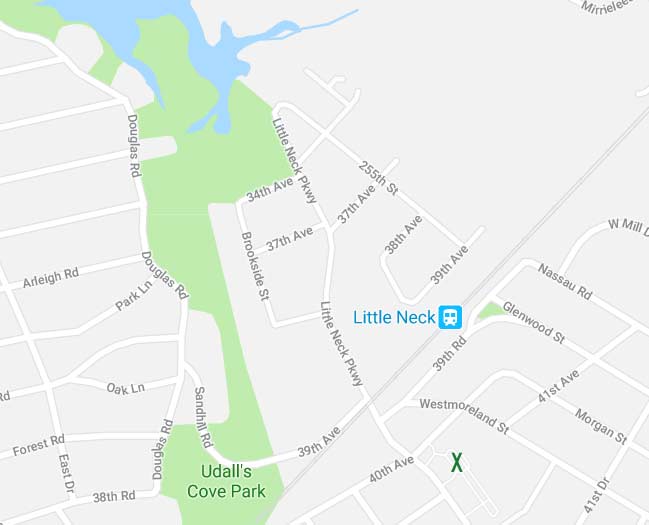 This is a current map of my neighborhood in Little Neck, with X marking the spot of my building, just south of the Long Island Rail Road tracks on Little Neck Parkway. However in just over a decade, I have very rarely ventured north on Little Neck Parkway north of the tracks. There’s no outlet, e.g. you can’t get anywhere from there. There are a few cross streets lined with private homes (even here, I have a bit of history as I will relate later). Recently I was in the mood for a short walk and ventured there. 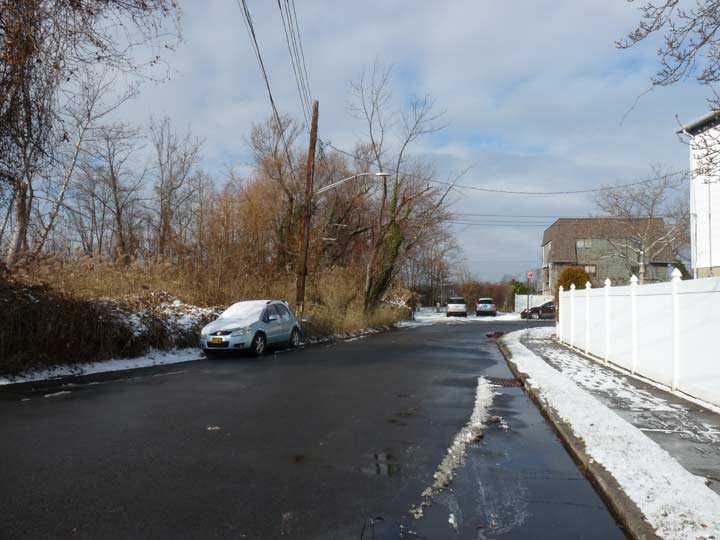 Little Neck Parkway gradually narrows as you reach its northern limit, intersecting 38th, 37th and then skipping to 34th Avenue. The omission of 35th and 36th Avenues is a bit puzzling. Maps of the area made in the 1960s show 34th Avenue crossing Udalls Cove from Douglaston into Little Neck, but maps are often made according to the hopes and aspirations of real estate developers and have tenuous connections to reality. It wasn’t until the advent of Google Maps, which are produced from aerial surveys and real estate surveys (and not from official city maps which are also compromised by developers) that a true picture of the street layout existed. 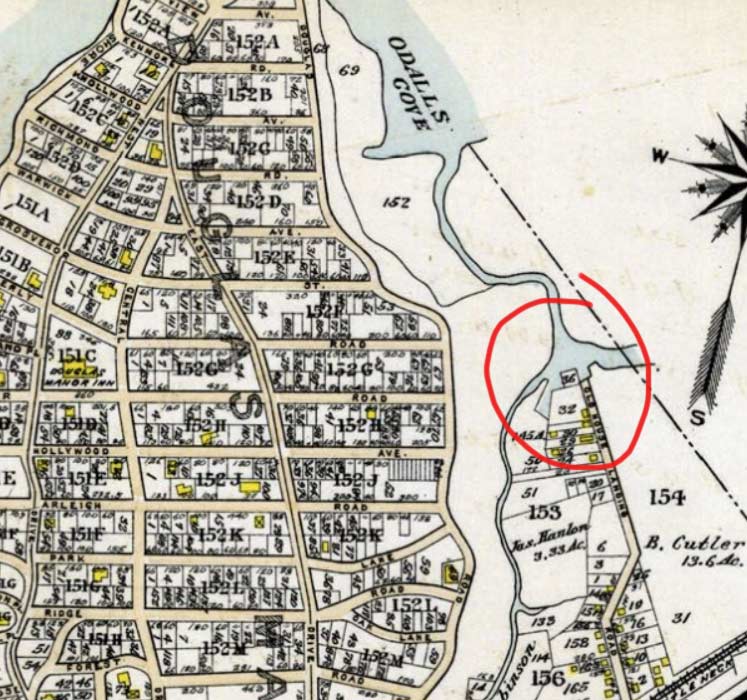 This 1909 map best represents today’s existing waterways at the north end even better than today’s print maps or even Google Maps do it today. Udalls Cove (misspelled here) is a short southern outlet of Long Island Sound (I make the Throgs Neck Bridge the divider between the East River and the Sound). The cover splits into two rivulets. The eastern one is unnamed and runs southeast to Lake Success. The western one is named Gabler’s Creek and runs southwest through Udall’s Cove Park as far south as near Northern Boulevard where it either runs into the sewer system or meets up with Alley Creek (I am unsure which). What you see on the 1909 map is still by and large today’s condition! I don’t know why modern mapmakers cannot get it right.

The north end of Little Neck Parkway is today bordered by the east end of Udalls Cove Park. 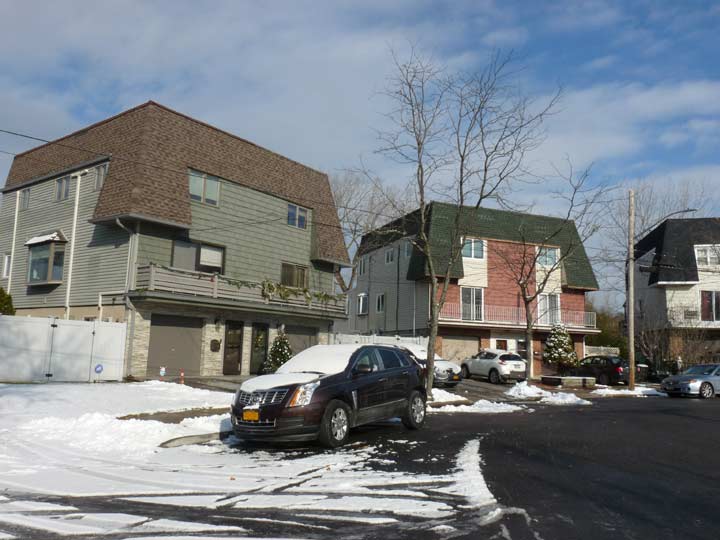 The north end of Little Neck Parkway and its small street grid wasn’t laid out and developed until after WWII and, some of these homes look so modern, it might have been until 1970 or so. Little Neck Parkway these days does not peter to an end, it makes a paper-clip-like turn at 255th Street. Until the 1960s, 255th Street was identified on maps as Duer Street.

It was in one of these two houses where I sat discussing an apartment rental offer in very late 1992 or early 1993. I had just been hired at Publishers Clearing House in Port Washington but I lived in Bay Ridge and wanted to live somewhere closer. In 1992 I had little knowledge of Little Neck; I doubt I had even reached it on my bicycle. But riding past on the train to work, I was fascinated by its railroad grade crossing and its suburban appearance and answered an ad for an apartment here. The owner was named Ging and as I sat on his couch chatting with him, I could see Udalls Cove and the East River through a glass sliding door. I did not wind up with the place, and eventually lived in a 4th floor walkup in Flushing at what would now be thought of as an impossibly low rent for 14 years until eventually moving to Westmoreland Gardens in Little Neck, which I had had my eye on for years. I hope to stick around awhile longer. 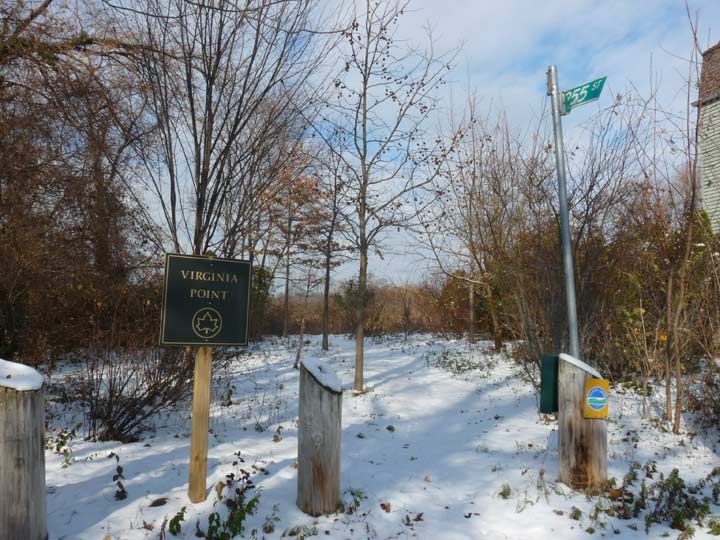 Virginia Point is a section of Udalls Cove Park accessible from a winding park path beginning at the north end of Little Neck Parkway at 255th.

In 1833, Richard Udall, for whom the cove is named, bought a mill formerly owned by the Allen family on the eastern side of the cove. The mill, now called the Saddle Rock Mill, remained in the Udall family until 1950, when it was donated to the Nassau County Historical Society. During the 1830s, a shellfishing community developed around the docks at Old House Landing Road (now Little Neck Parkway). The industry thrived as the demand for oysters and Little Neck Clams (Venus mercenaria) grew. But by 1893, the local shellfishing industry was finished; overharvesting, poaching, and pollution had destroyed it. Today, the stanchions and bulkheads at the end of Little Neck Parkway are all that remain of the bygone era.

The Udalls Cove Preservation Committee initiated the acquisition of Udalls Park Preserve. The group of local residents organized in 1969 in order to prevent development of the land and promote public ownership. Udalls Cove was first mapped as a New York City park on December 7, 1972, but many subsequent additions have increased the size of the park. The preserve was created by a cooperative agreement between Parks and the New York State Department of Environmental Conservation; the state owns most of the land, but Parks manages the property. NYC Parks 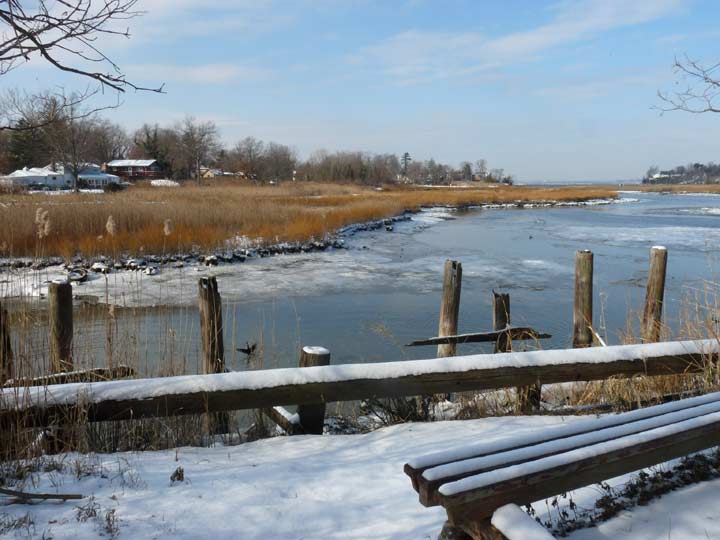 Virginia Point provides views west to Douglaston and east to Kings Point and Manhasset Neck. Northward, across Long Island Sound, is the Soundview section of the Bronx. The point was named for a woman who was instrumental in the foundation of Udalls Cove Park, Virginia Dent, executive director of the New York State Northeast Queens Nature and Historic Preserve Commission. Her husband Thomas Dent was an attorney who prepared the legal papers incorporating the preservation committee for Udalls Cove and served on the Commission’s board of directors for over 40 years. The commission’s co-founder, Aurora Gareiss, also has a spot on the map named for her, Aurora Pond, which is attainable from Sand Hill Road west of Little Neck Parkway above the tracks. 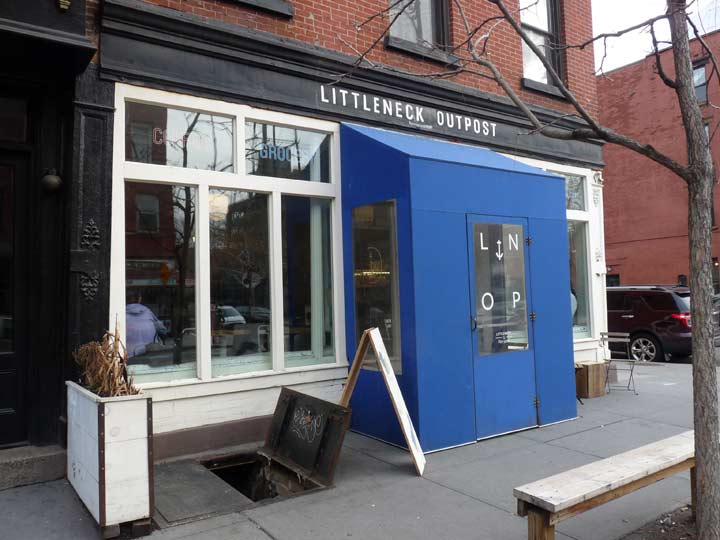 As you can see there are still remnants of docks along the waterfront at Udalls Cove. For decades, until pollution and overfishing ended it, there was great demand for the edible bivalves that could be found in the cover and the Sound, notably Little Neck clams (possibly the most treasured delicacy), which were named for the community where they were fished. A pair of Brooklyn restaurants on Gowanus and Greenpoint bear the name of the clams. 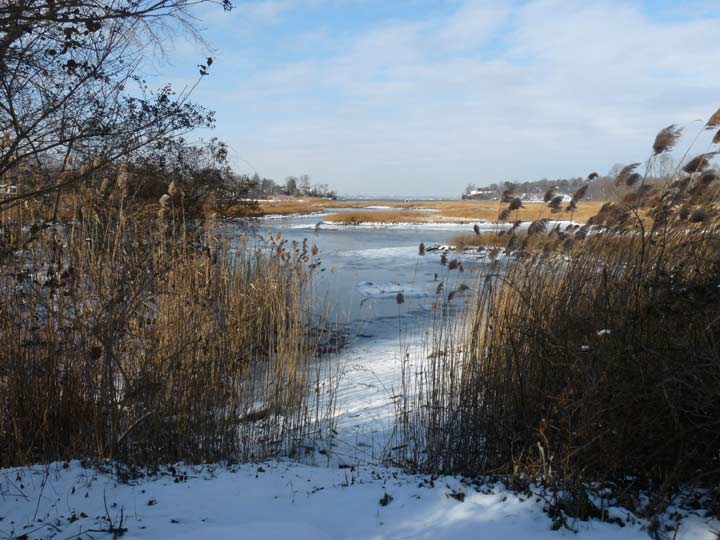 A view of Udalls Cove directly from Virginia Point. 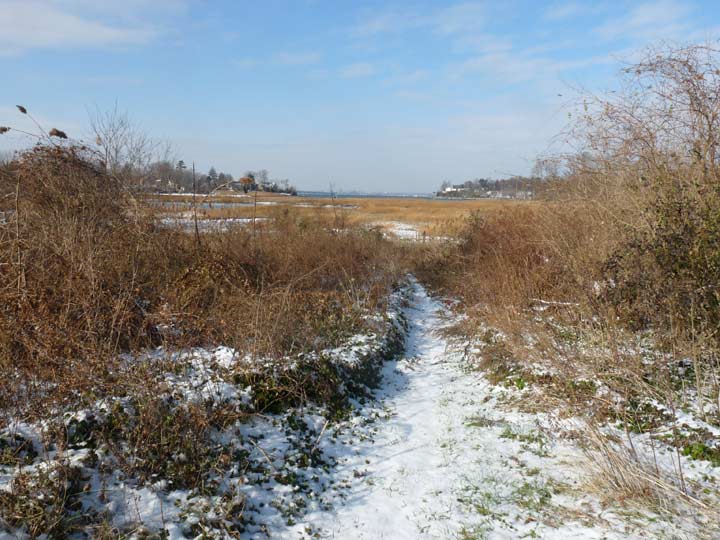 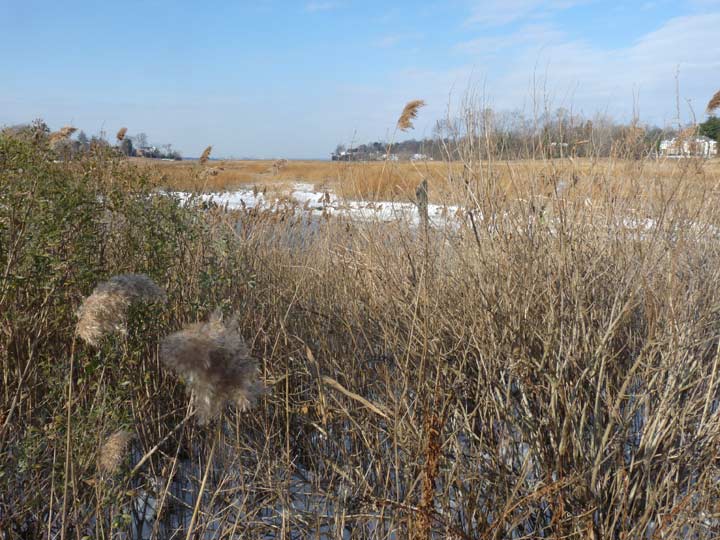 A pathway on what is possibly private property (I skirted the edge of a back yard) with a water view. More pilings can be discerned through the bushes. 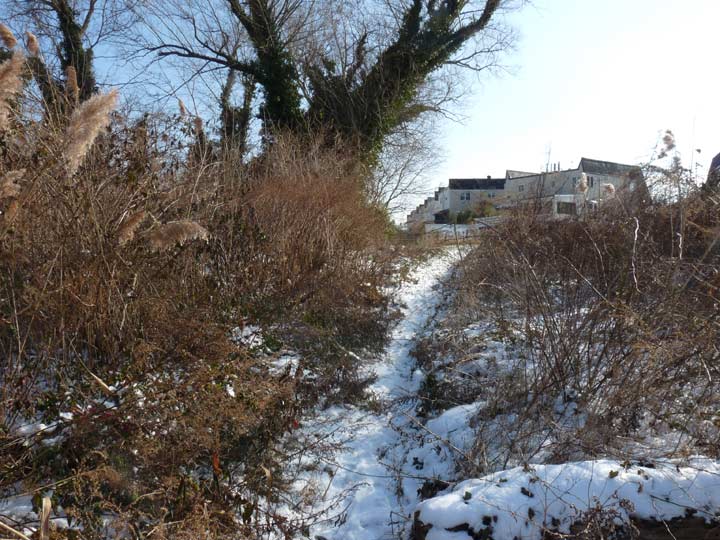 Though Virginia Point remains commendably wild you are never far away from “civilization.” 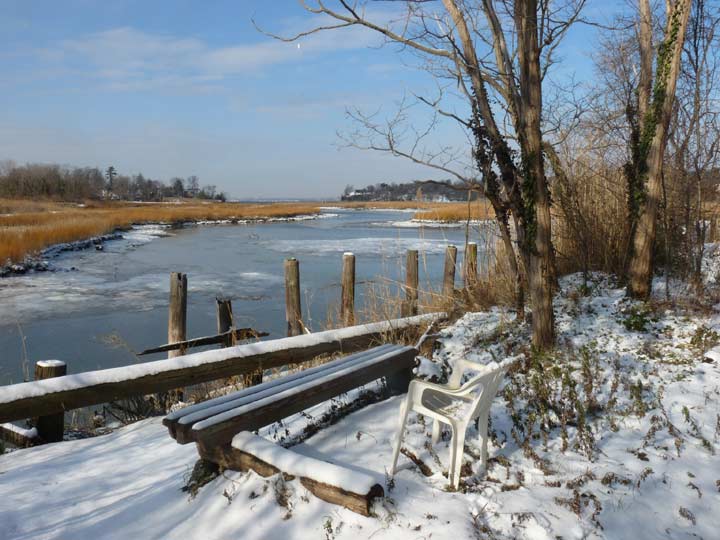 A view northeast toward Manhasset Neck.

I never saw this area.
Not the New York one expects.

Here’s more about Little Neck Outpost, which, you indirectly mentioned, is in Greenpoint, Brooklyn.

.BTW: what a difference the LI Sound makes – Little Neck & Soundview illustrate the stark contrasts in urban life ( poverty & wealth with only a shrinking buffer zone in between). Enjoy your Comrade Mayor’s second term.

19th century newspapers refer to the Old House Landing Road area sparingly. There appears to have been a small African American community in the area, according to the reports. Although era papers report mountains of Little Neck clams being consumed, I haven’t found any record or traces of what we might think of as a mechanized shellfishing industry centered there. Ditto, Saddle Neck oysters (which were a “thing” back then, too). The Saddle Neck fields, off Great Neck peninsula (just about a half mile north of Virginia Point) were overfished and polluted out of existence as well.

By contrast, there were a number of oyster and clam companies along the Great South Bay (and they are making a comeback there) the Blue Point oyster for instance.

Further east, in cleaner waters (and by the way, Little Neck Bay has greatly improved over the last generation), towns are permitting companies to grow oysters and clams in public waters in controlled cages, and it’s working. Try a Montauk Pearl oyster. Excellent. Efforts are being made to seed mussels, which I am told are natural filters limiting the growth of noxious bacteria.

I had no idea that the clams were named after the ‘hood rather than after their anatomical features.

Those seventies era houses were clearly inspired by Darth Vader. “Luke I am your duplex.”

The old wood pilings in the photos of Virginia point I believe are from Peterson’s boat yard that occupied a large portion of that land many years ago.
Gablers Creek which is mentioned ran South from Aurora Pond, under the LIRR tracks, it turns West at the foot of 247st and runs South again through the fields and woods between Douglaston and Little Neck. It was actually for storm runoff from Northern Blvd. The catch basins on Northern Blvd drained into it via underground piping and it exited from a large open pipe behind the firehouse on 244st. The only time it flowed was when it rained. My friends and I used to float down the creek from the open pipe to the LIRR tracks.
Udall’s Cove actually extends right to Northern Blvd. The large piece of land between the bank on the corner of 244st and the 7-11 at 247st is the South end of Udall’s Cove. In 1974 a large grocery chain (Grand Union I think) tried to acquire the land to build a store. I was working at BoHack’s, which was at the corner of Marathon Pkwy. and Northern Blvd. BoHack’s paid the grocery clerks, including myself to go door to door with flyers to get the community to fight to preserve the Udall’s Cove wetlands.

Thanks for posting the excellent information and photos in this article. Further information about and photographs of this interesting area an be found on the website of the Udalls Cove Preservation Committee (littleneck.net/udallscove) and its Facebook page (Facebook.com/udallscove).

Until the early 1950’s my family lived at 330 Kenmore Road in the “Manor” portion of Douglaston. In the 1951-52 my mom would drive my dad to the Little Neck LIRR station rather than the Douglaston one on days when that station would be too crowded with other commuters. The drive would take us along Douglaston Road to what became Sandhill/39th, which at the time was paved very badly, if at all. We called it the Bumpy Road. There were a couple of old, dilapidated houses on the road which were flooded out at the time of Hurricane Carol in 1954. My dad later told me that the road and houses had been flooded at least 6 feet deep or more, which bodes ill for the newer houses down there when the next big one hits. In any event, at the end of Virginia Point (seen in the above image with the view of Douglaston, there was a boat yard where boats were stored and maintainedd.