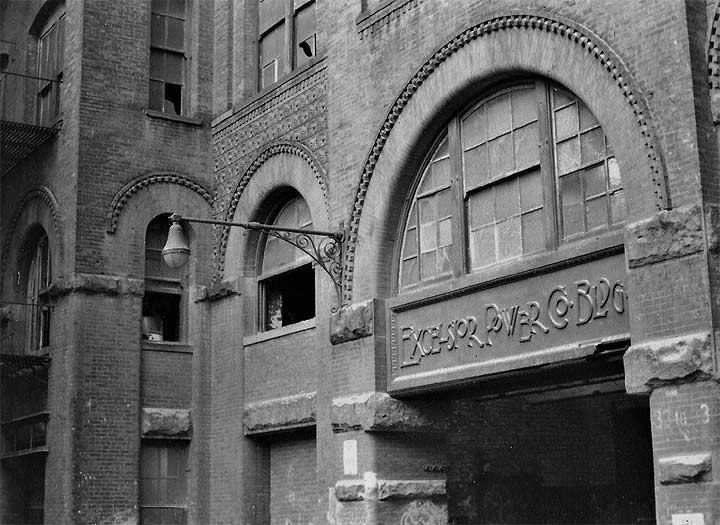 From the Bob Mulero archives comes this photo of the Excelsior Power Company Building, 33 Gold Street between Fulton and John Streets, where Gold meets the tiny Edens Alley. It has changed little since it was built from 1887-1888 and is one of my favorite buildings in town, not least for its Art Nouveau-lettered ID cast metal plaque — that lettering is positively joyous — and for its 1920s-era Type G bracket lamp by what used to be the front entrance. Unfortunately 33 Gold Street is pretty much invisible these days as scaffolding on Gold Street, a narrow path through tall towers, is now more or less permanent in spots. 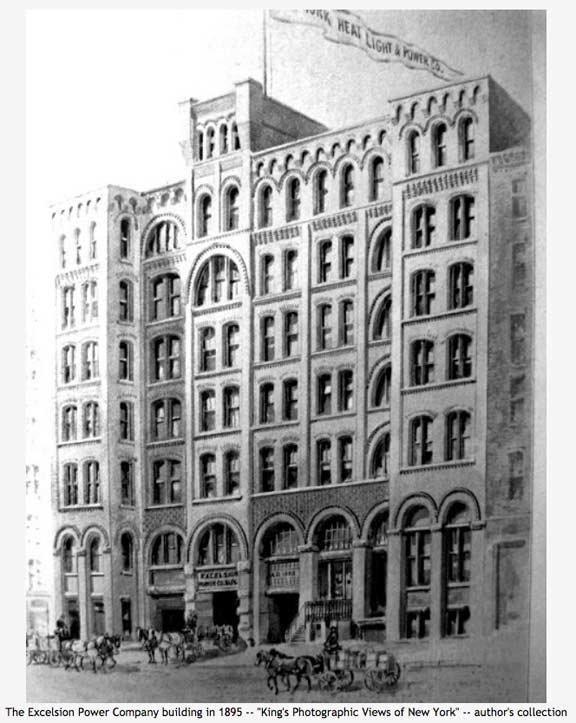 The reliable Daytonian in Manhattan explains that Excelsior was owned by designer/engineer Martin B. Brown and converted steam power into electricity. The headquaters were originally a bit uptown on Spring Street, but when Brown found a better space on Gold, he hired architect William Milne Grinnell to design the new powerhouse, and he came up with a massive brick Romanesque Revival building. The photo above shows that the building was originally easy to photograph, but Gold Street has sprouted megaliths since then.

As with most Romanesques and Queen Anne buildings of the 1880s, there are plenty of interesting touches like differently shaped windows and variegated brickwork that are feasts for the viewer. In addition to the powerhouse, Brown rented other parts of the building to printers and jewelry manufacturers.

By the 1990s, 33 Gold Street had been converted to residences — I would have bought in if I could have afforded it, but since scaffolds now shield the entrance, maybe I’m glad I didn’t. The formr grand arched entrance was bricked in and filled by windows, with a smaller entrance built next to it.

As for the wall bracket lamp, it’s still there with its Junior Bell lamp, though the glass reflector bowl fell out years ago. There is still an incandescent bulb in it, but who knows the last time it worked. 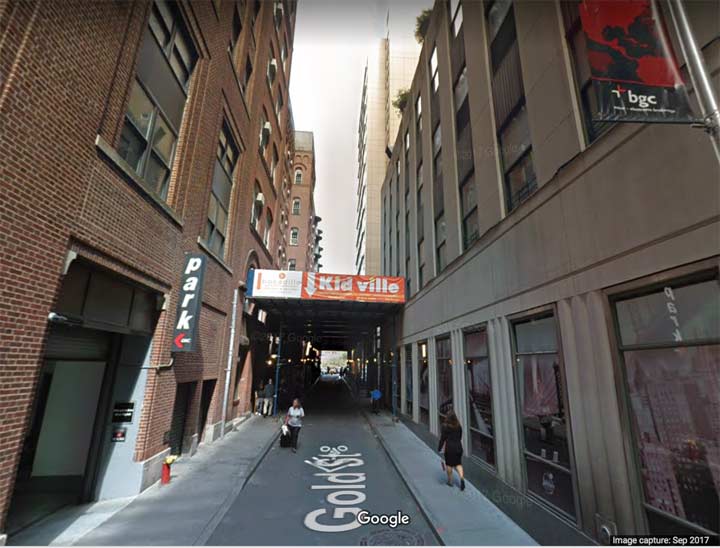 A look north on Gold, just south of the Excelsior. The scaffold has been there for so long, ads are now placed on it.

Wow. That is fantastic. If you use google maps to look at a 2011 street view, you can see the Excelsior Power sign and the light pole in all its unobstructed glory.

I used to see this building when I frequented Ryan’s Sports Bar.
I often wondered about it.
Now I know, thanks!

Just a question as I work not very far from there (Maiden Lane). Why does Edens Alley change its name to Ryders Alley as they form a continuous street?

If you are interested in more about this building and the role my great grandfather, Leo Daft, played in the earliest distribution of electric power from this building to businesses in Manhattan, go to
http://s-media.nyc.gov/agencies/lpc/lp/0962.pdf

So you are a great-granddaughter of Leo Daft – what a great ancestry! I was contacted by the Landmark effort by the staff who had seen a mention of the plant in my history of power in NY City. We had a long discussion some of which is reported in the LPC report that your link connects.

I became so fascinated with the background and the extent of the Daft system that so eclipsed Edison’s work and introduced industrial as opposed to lighting power that I did an article for the History Column of Power & Energy magazine published by the IEEE Power & Energy Society. It is in the current issue “Forgotten Pioneer; Leo Daft and the Excelsior Power Co.”

I don’t know if the full pdf is available – those are some times restricted until the next issue is released.

Good to know that the descendants of those great pioneers still retain interest in their work!