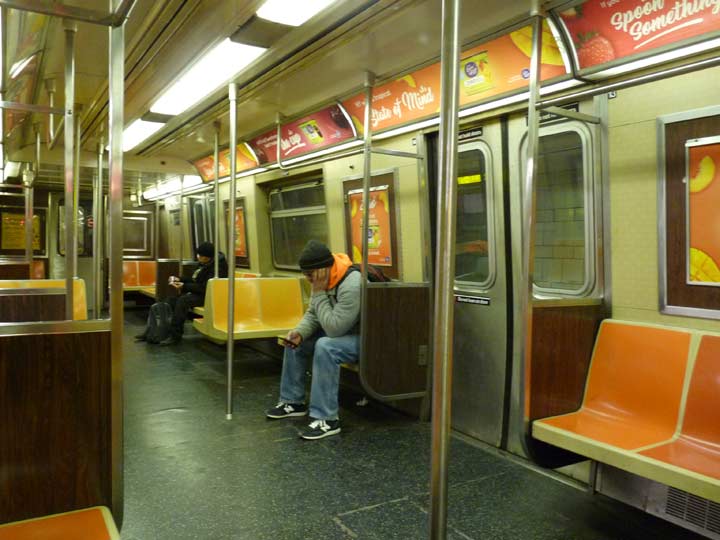 It might be time to begin saying goodbye to the R-46 subway car, which currently works the A, F and R subway lines; in fact the A fleet is still nearly all R-46. Unofficially, the “R” in front of New York City subway car designations stands for “revenue” though I have heard other words substituted for it. The designation was first used for traincars of the Independent Subway, the lines that NYC built between 1925-1940 to compete with the Interborough and Brooklyn-Manhattan. The very first car in passenger use on the IND was the R-1, and examples of it can still be found in the Transit Museum and emerge for fan trips and holiday specials.

The R-46 and its near-twin, the R-68 (introduced in 1986, also produced by Kawasaki), are my favorite subway cars. The fronts have large illuminated bullets with the letter identification, I find the orange-yellow seats and wood panel trim comforting (the blue and white esthetic used for new subway cars since then reminds me of a dentist’s office) and I liked the “bing-bong” door opening sound effect that has been in place ever since these cars, built by Pullman, first debuted in 1974; a door-opening sound effect has appeared on all makes ever since. Also: the support bars by the door and square and not cylindrical! The glass panels that formerly occupied the space between the bars were removed years ago, as miscreants were fond of spray painting them or smashing them. The chief difference between the R-46 and R-68, at least esthetically, is that the R-46 has wallpaper with the NYS state symbol while the R-68 simply has a banded metal finish on its interior sides.

Best of all: only the R-46 and R-68s have window-facing seats. I like to sit looking out the window; even when the train is in a tunnel, I observe the station decor and the passing panoply of people on the platforms. I can rarely get a seat by the window on the A with the crowding, but when boarding the R at 95th Street (pictured) it’s easy to snag one. The R is in a tunnel its entire route, but the A and F spend considerable time on els and the A even crosses Jamaica Bay.

The city has apparently gotten away from window-facing seats because, if you’re on the inner seat, you need to climb over a seat mate to leave the train, and apparently people don’t like to do that, the MTA heard their complaints, and aisle-facing seats are all that are ever built anymore; it’s too bad. (It hasn’t stopped the Long Island RR and Metro-North from producing window-facing seats on new cars.)

Over the next couple of years, I’ll try to feature these soon-to-disappear subway cars, some of which go back as far as 1964 (R-32).

Try a window facing seat on MetroNorth to Garrison:

While I also appreciate the forward/backward facing window seats, to this then-teenage railfan the R-44/46 had a large negative, in that they began to spell doom for NY’s “railfan windows” at the ends of the cars, due to the full-width cabs. Sad!

I also like the window facing seats because it occassionaly, especially when the train is going slow, allowed me to see tunnel sections that were part of the 2nd system that were never or partially built ie. the ramp to the 2nd level Roosevelt Avenue station where the Far Rockaway line was supposed to start from.

I agree with you Kevin about the transverse seats on the R46 and R68 cars – I also like sitting perpendicular to the subway wall and watching the station tiles and other underground features go by. However, there are two chief disadvantages to the R46 and R68 fleets, both due to their 75 foot lengths. A full length train (600 feet) of 75 footers is 8 cars long, which gives 32 door openings per side. A full length 60 footer has 10 cars, or 40 door openings per side. Those eight additional door openings made passenger egress and ingress faster, which reduces dwell time per station, an important factor because many of today’s delays are caused by overcrowding.

The other disadvantage is 75 footers cannot operate on the J, L, M, and Z routes, which comprise the so-called Eastern Division of the old BMT. Sharp curves at the foot of the Williamsburg Bridge, Myrtle-Broadway, and Crescent Street restrict those lines to 60 footers, which can operate anywhere on the B Division (IND and BMT) routes.

For those reasons, the 60 foot car will reign supreme after the R46 and R68 cars are retired. It’s interesting that the original R1 IND cars introduced the same basic 60 foot, 4 door body style still used on the newest cars today. I rode an R179 on the J Line last week and it retains those same dimensions.

I remember when the R44 and R46’s went into service on the Queens Boulevard line in the mid 1970’s. I was about 10 years old and before that, the line was served by R1-9s and some R-38’s. Those cars were noisy and slow – and NOISY! During long tunnel runs you could not hear yourself speak. Conversations with other people were impossible. Then the R-44’s and R-46’s appeared and they were magical. Quiet inside, air conditioning, colorful interiors, perpendicular seats. We were amazed whenever a set of those trains pulled into Union Turnpike. And now they’re being retired. I am getting old.

In terms of propulsion and braking controls, the R-44 and R-46 were virtual twins. Both used what was then “new technology” with a “P-Wire” which controlled the braking and other “improvements.” There are A Cars which have cabs and B Cars which are cabless and were typically assembled into 4 car sets of A-B-B-A. These were rebuilt with new propulsion systems and signs in the mid 80’s.

The braking and propulsion on the R-68 had reverted to pre-R-44 SMEE technology, with cars initially going on line as single units like the R-62 (which copied R-10, R-17, etc.). Cars had a full width cab at one end and a small cab on the other end. These were eventually coupled into 4 car sets.

PS: I think the “ding-dong” comes just before the doors close.

Wasn’t it the r-44 or r-46 or both that were equipped with lightweight trucks that began cracking shortly after the cars were in revenue service? The cost of replacement standard trucks sent Pullman into bankruptcy.

Yes, the R46 cars had the faulty trucks. From website http://www.nycsubway.org:

“The R-46 Rockwell truck fiasco continued unabated into 1980. The rate of cracks found on the trucks nearly doubled, from 889 cracks logged in February 1979 to 1,700 in March 1980.35 The R-46s had to be inspected several times a week at the TA’s expense, and the TA and New York City filed suit against Rockwell, Pullman Standard and four other subcontractors for $192 million. As of March 1980, 62 R-46s were out of service due to cracks and 112 were out of service for other reasons. While the inspections caught many cracks before they became unfixable problems, on September 27th, two cracks of a type not before seen were found on the trucks.36 As a result, the TA cut the R-46 usage rate in half, and they would run only during weekday rush hours. Until this time, they were run between 6am and 10pm every day. Shuffling the R-46s in and out of the yards was causing delays throughout all the IND-BMT lines. In an effort to reduce the mileage that the R-46s ran, 144 of them were moved to the Brighton Line, but complaints from Brighton Beach residents about excessive vibration forced the TA to move them to the A and CC lines.37 Ironically, R-46s were run at all times during an acute equipment shortage during December 1980 and January 1981, due to very cold weather. Even the JFK Express was affected — there were times in early 1981 where R-10s were making up the service! All of the R-16s, the cars the R-46s were intended to replace, were put back into service while the R-46 problems were sorted out. The problems were, besides the cracked trucks, heaters and wiring that posed fire hazards, faulty lighting and door controls. Yet there was even a TA proposal to remove the cross seats from the R-46s and replace them with side facing seats, as found in the R-27s through R-42s. In late December of 1981, the TA won $72 million in damages from Rockwell International, but the City Department of Investigation indicted seven high-ranking transit officials in connection with the planning, purchase, inspection and acceptance of the R-46 subway cars. Improprieties such as favoritism to certain contactors and mismanagement were cited. On March 8th, 1982, Rockwell paid New York City $80 million for damages that resulted from the faulty trucks. ”

Link to entire page where the words above are published:
https://www.nycsubway.org/wiki/The_New_York_Transit_Authority_in_the_1980s

I remember when these cars were first introduced to the Brighton line (current Q and B trains in Brooklyn). It was a hot summer day, but when the doors closed, whoosh! Instant air-conditioned comfort. The floors were carpeted, but that didn’t last too long – I imagine vandalism and spills quickly convinced the TA that it wasn’t a good idea.

Over the years, I’ve occasionally caught a train on the Brighton line that has the door chime tomes reversed, so the two notes sound exactly like the opening two notes of “Somewhere Over the Rainbow” (some-WHERE). I hadn’t heard that train in years, then just recently I heard it again. I also saw one of these trains operating on the “Q” line with the old Q-diamond symbol on its front and back windows, which hasn’t been used in many years – I wonder if this is the same “reversed-chime” train and if it was restored to service from storage recently.

The R68 class actually has two subsets and two builders. The 425 R68 cars (fleet # 2500-2924) were built by Westinghouse-Amrail Company, Company, a joint venture of Westinghouse, ANF Industrie, Jeumont Schneider, and Alstom. The cars were built in France from 1986 to 1988 and shipped through New York Harbor. Only the 200 R68A cars (fleet # 5001-5200), virtually identical, were Kawasaki products. Information is from Wikipedia and http://www.nycsubway.org.

The R44 was also a twin of the R46. I don’t recall it being difficult to get out of the inner window seats, there was enough legroom between it and the isle seat in front of you to get up. At least if if you or the nearby passengers weren’t over weight whales.

Sad to see cross seating disappearing from New York subway!
Even the cars on the Broad Street subway in Philadelphia have a more interesting and colorful interior than the drab interiors of newest New York subway cars!