I haven’t been to the Hudson River waterfront in Washington Heights of late, and I had no idea that a new pedestrian bridge had opened in September 2017. I hustled over there on a very cold December morning on which the wind was blowing so hard in 15-degree weather I curtailed a planned lengthy waterfront walk. I’m told fingerless gloves may help, but I had trouble holding the camera it was so cold. In any case, I was able to get some spectacular visuals as this was a “severely clear” morning. This was one of the first days of an especially long cold streak and ice floes had not yet appeared in the Hudson as they would in a few days. 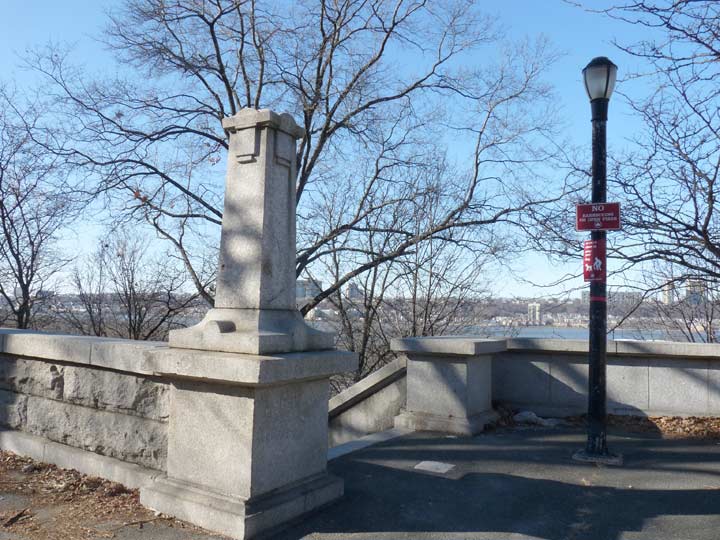 To attain the new bridge, I took the #1 train to the 157th Street station and walked south on Broadway and west on West 151st Street to Riverside Drive, which here sits high on a bluff overlooking the Henry Hudson Parkway, Amtrak railroad tracks, and the Hudson River.

The abutment is protected by molded concrete railings that look like they could survive for centuries. 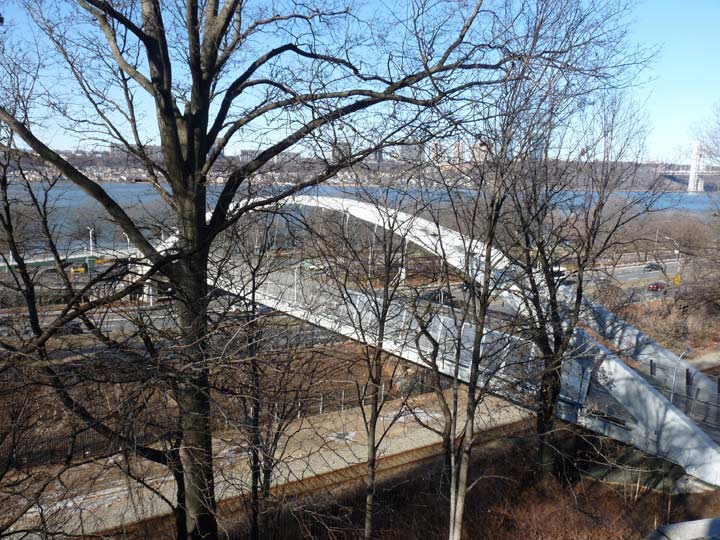 The new arch bridge is immediately visible from the abutment, but the view would be invisible during the warm months when the trees are filled out. To me it seems like a mini-version of the Hell Gate and Bayonne arch bridges. I’m happy the architects decided not to build a cable-stayed bridge, which is by far the most-employed style these days from the new Kosciuszko and Goethals Bridges as well as the new Tappan Zee Bridge (more on that later). 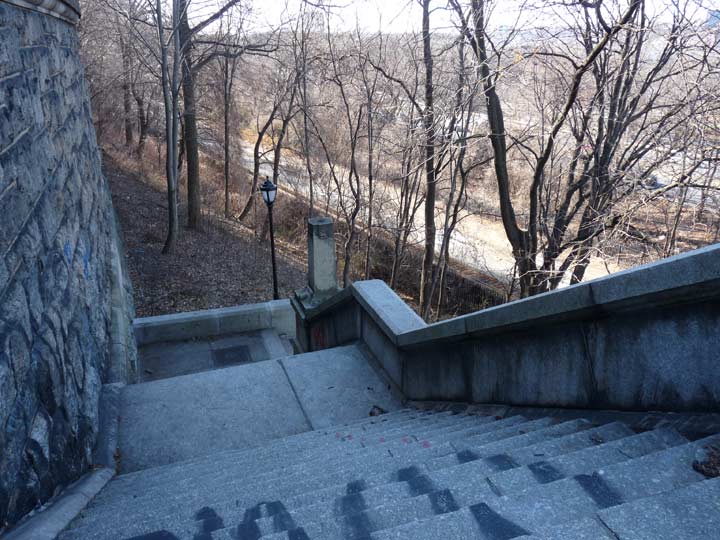 Descending the embankment is fairly difficult on this steep set of concrete steps, which have no railings. 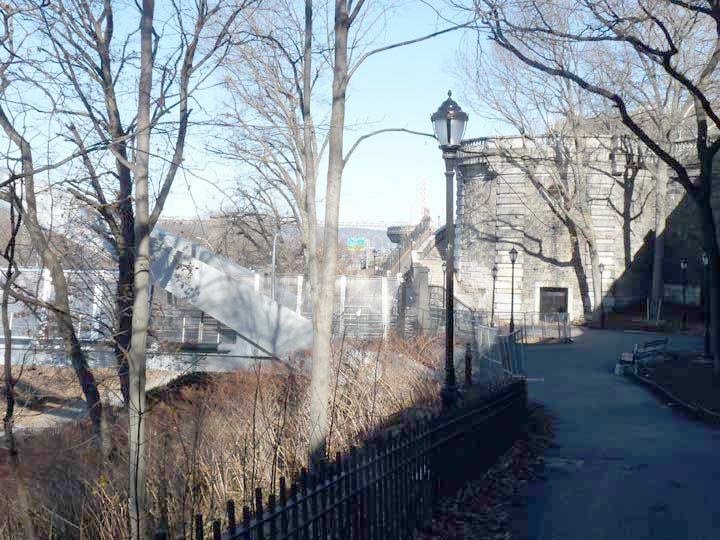 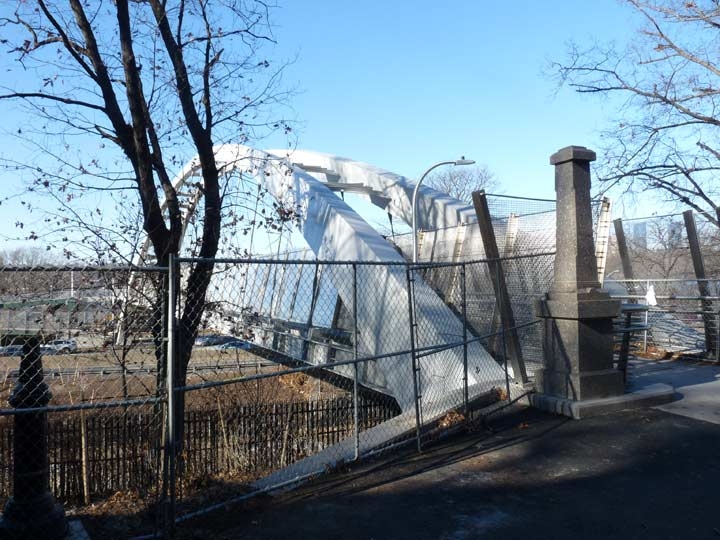 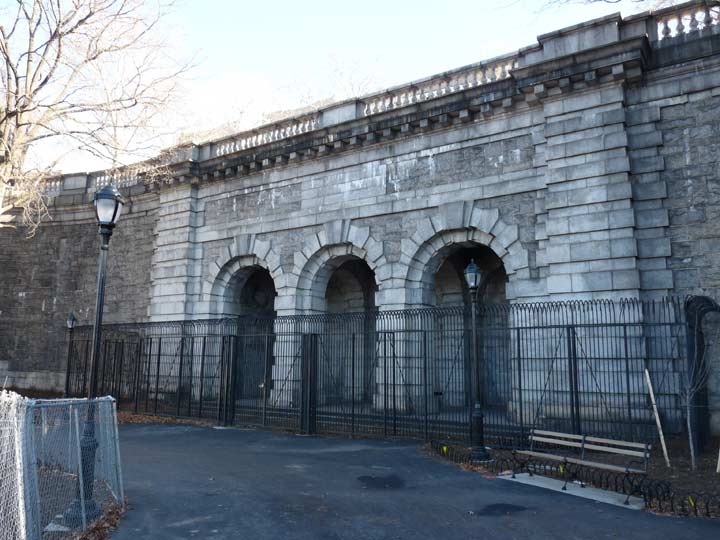 The new Herman D. Farrell Bridge, according to accounts, is fully Americans with Disability Act-compliant, e.g., wheelchair-accessible, though I saw no sign of any ramps on the Riverside Drive end; given the cold and wind, I did not go out of my way to look for the ramps but they must be there. 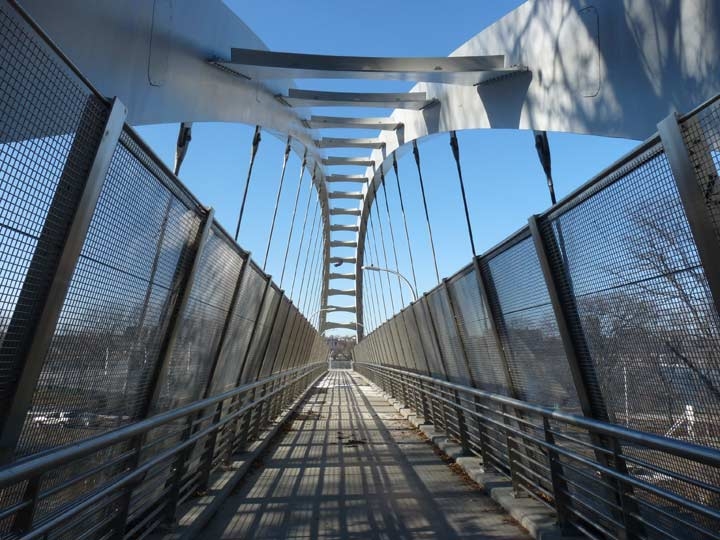 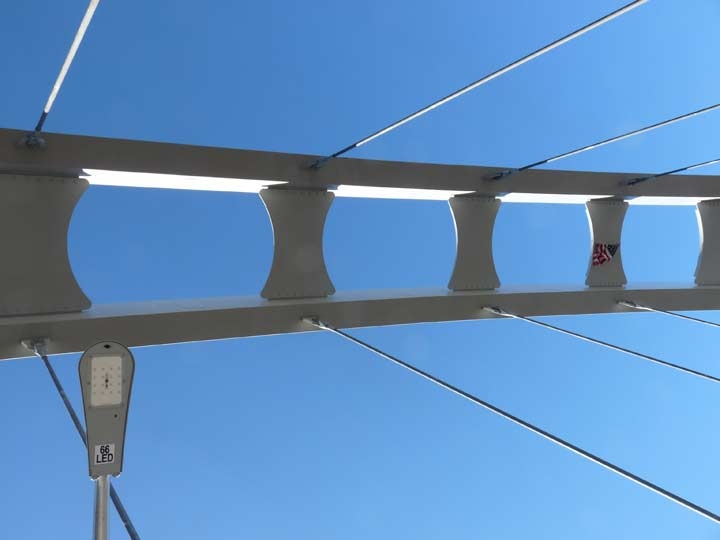 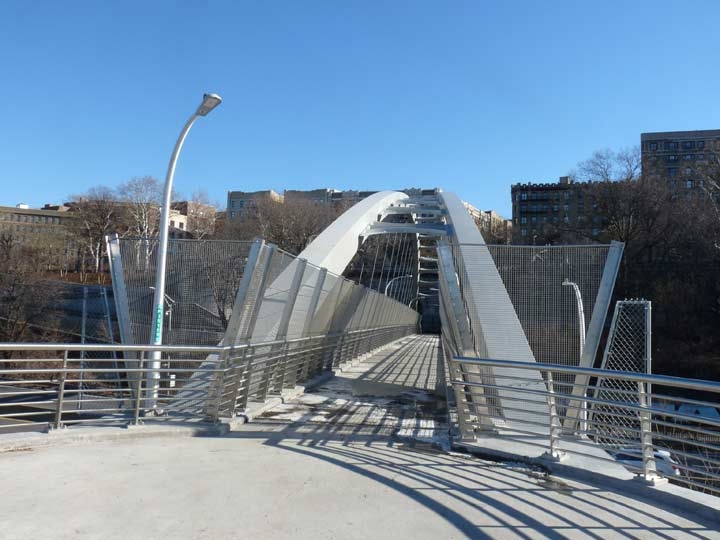 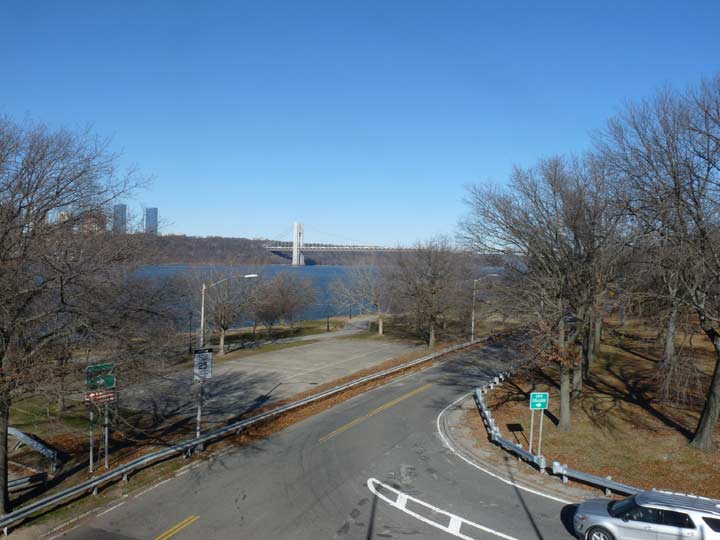 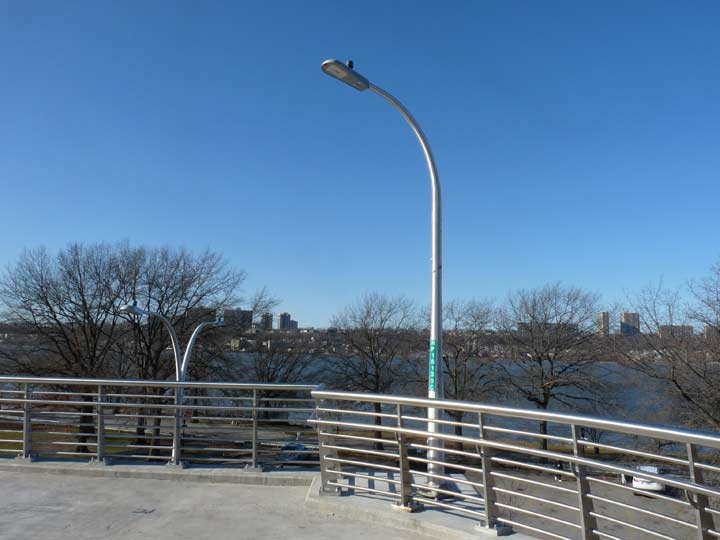 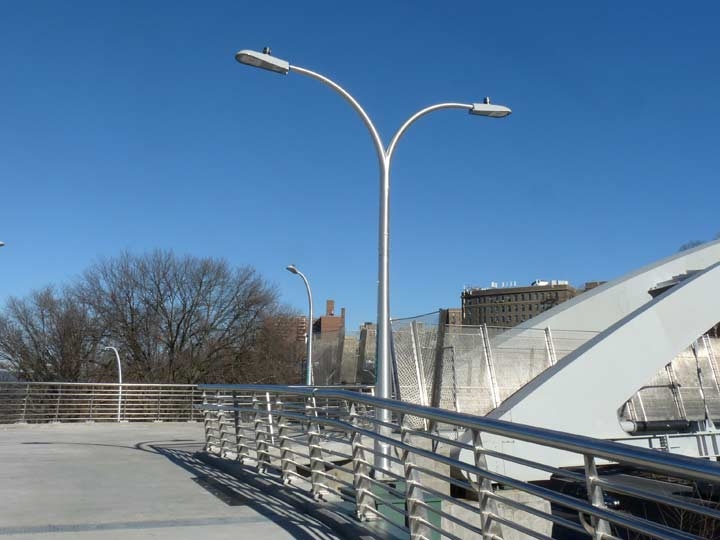 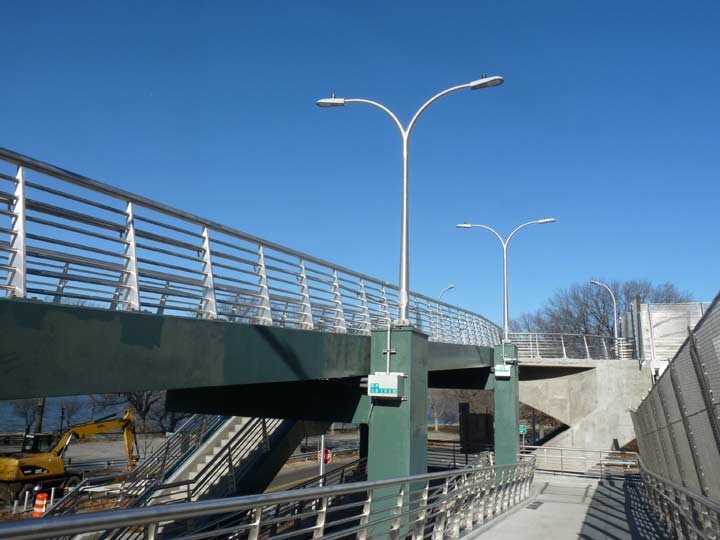 The new bridge and its ADA ramps are outfitted with single and twin davit-style lamps. These are reminiscent of the davits that were originally used on pedestrian bridges on the Gowanus Expressway in Brooklyn when it was constructed from 1959-1964. Those davit lamps were replaced in the 1970s, so it seems that the city is returning to the style. 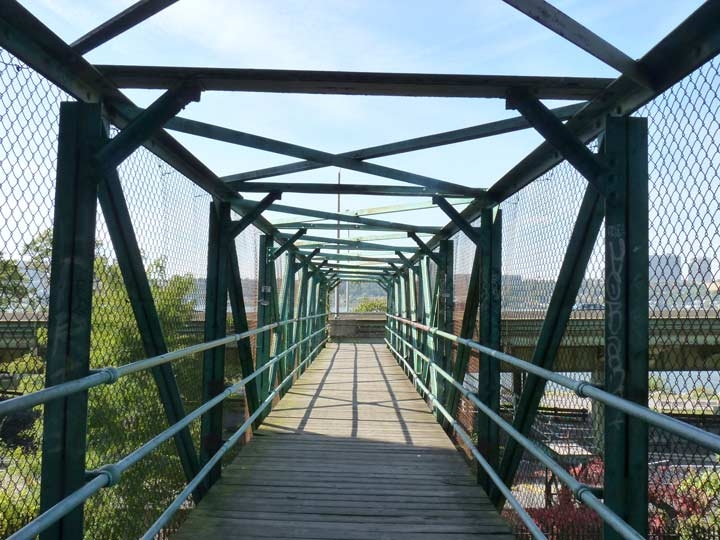 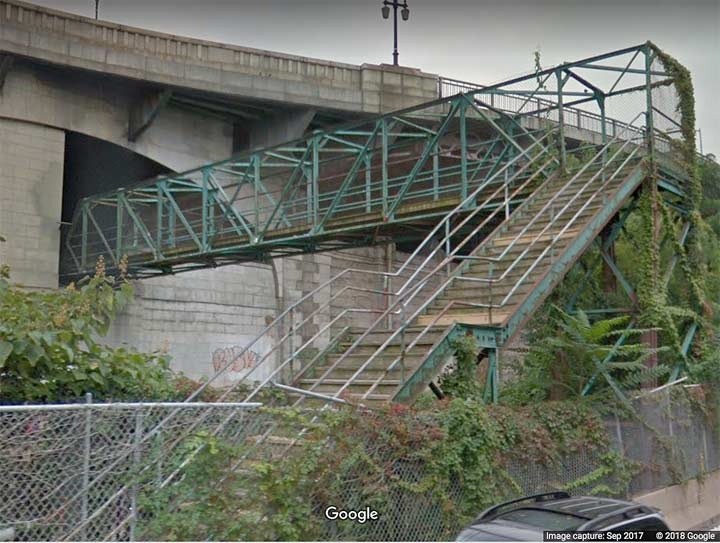 In the fall of 2017 I “discovered” a much older pedestrian bridge at the west end of West 155th at Trinity Cemetery. This bridge runs over the tracks and then descends down a set of steps to a Henry Hudson Parkway ramp. A stoplight stops the ramp traffic allowing access to the bike and pedestrian paths.

The Farrell Bridge joins the recently reopened Squibb Bridge which runs from Columbia Heights to Brooklyn Bridge Park in Brooklyn Heights, which originally opened in 2012 but was closed since some patrons were becoming seasick due to the Squibb’s swaying, a built-in feature that proved unworkable. The bridge closed for two years while it was reinforced and much of the swaying eliminated. Similarly, the Farrell Bridge had to have its concrete base re-poured after the initial installation proved unable to support the infrastructure, delaying the construction. 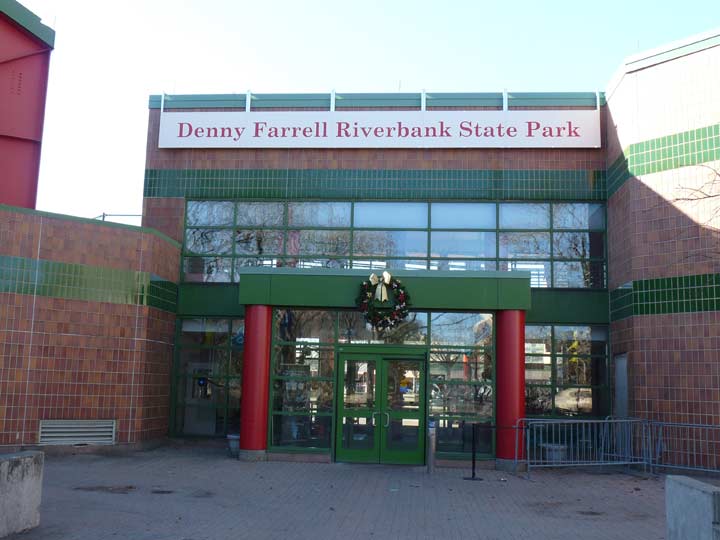 As chairman of the Ways and Means Committee, Farrell agreed to name the new cable-stayed Tappan Zee Bridge for Mario Cuomo, the longtime NY State Governor (Mario Cuomo himself had previously named the Tappan Zee for his predecessor, Malcolm Wilson). As part of the deal with current Governor Andrew Cuomo, the new bridge as well as Riverbank State Park now bear Farrell’s name.

Riverbank State Park was opened in 1993, constructed atop a new sewage treatment plant; Farrell helped obtain the funds for the park’s construction in the 1980s, working with Mario Cuomo.

So the Squbb & Farrell bridges had to be re-engineered? Knowing the individuals involved & the Evil Empire State’s culture of corruption, it was probably planned that way so various contractors & their political class patrons could take a second bite of the apple. Blue state out-migration will continue while the fake news outlets ask “why?” while practicing character assassination,

“To me it seems like a mini-version of the Hell Gate and Bayonne arch bridges.”

This bridge is not a regular arch bridge but rather a tied arch, where the bottom chord (deck) is in tension to balance the spreading forces at the ends of the arch. The whole thing sits on top of the abutments without putting any side forces on them, making it much simpler to construct. If anything, this bridge looks like a mini-version of the new Kerch Strait bridge in Russia.