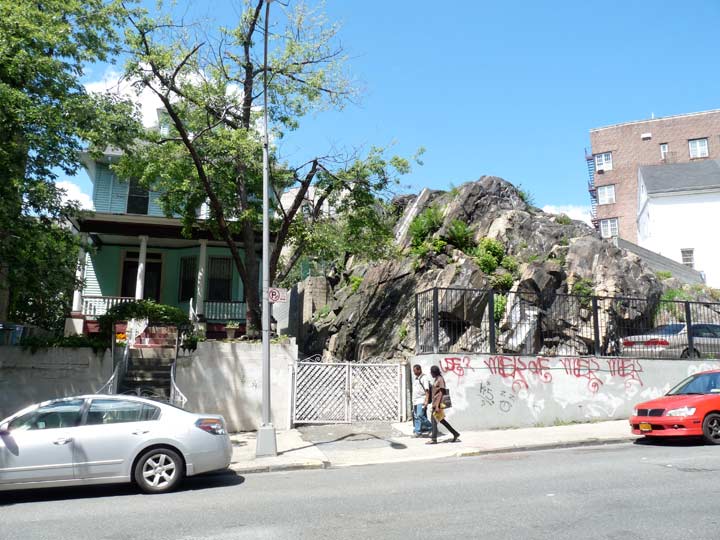 In the summer of 2011 I was walking in Bedford Park, Bronx when I spied an especially large schist outcropping at Creston Avenue and Minerva place, wedged between Jerome Avenue and the Grand Concourse. I noticed a pair of frame houses that may have gone back over a century. While this one has survived… 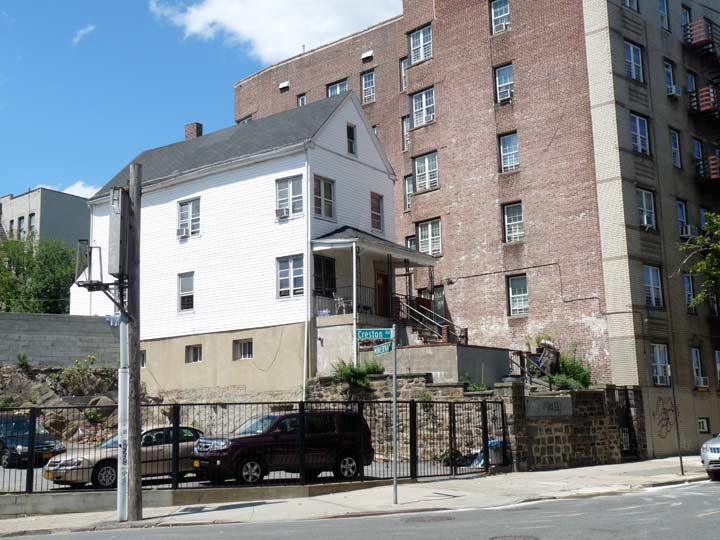 …this one was demolished in the summer of 2017 in favor of, what else, a condominium tower project. Since Creston Avenue is near the ridge that the Concourse is built on, that is likely the genesis of its name. Minerva Place, meanwhile, was constructed in 1913 on the former property of financier-racetrack owner Leonard Jerome; the Jerome Park Reservoir is built at the site of the former racetrack. Jerome is buried in Brooklyn’s Greeen-Wood cemetery, and his grandson, Winston Churchill, became the wartime Prime Minister of England.

The Place either got its name from a statue of the goddess of wisdom located on the Churchill estate, or a prized race horse. The real reason is lost to history, or perhaps can be found in motheaten documents in a real estate office somewhere.

I grew up near Minerva Place in the Bronx and back in the day (the 60s) the rocks were not fenced off. We called them Red Rocks and climbed all over them. They seemed much larger then.

And we would also ride our bikes over the University Avenue to a park where Fort No. 4 dating back to the Revolutionary War was located — another and I think larger outcropping. We also practices our alpine skills there.

I know what you mean, Bruce about rocks seeming to be larger back then. My grandmother lived across the street from St. Mary’s park and the sliding rock. I went by there recently was shocked at how small it looked.

I “actually” lived at 19 Minerva Place from the years 1968 to 1977. (9 years old to 18 years old). I remember those “mountain of jagged rocks” oh-so-well!!! ” Used to climb up them nearly every day, with my friends, as a youngster, not for the “sole purpose” of proving to ourselves that we could “actually” do it…but more so because we pestered that old lady who lived up there “for kicks.” But now that I have become, what I consider to be, a “completely mature & responsible individual” …lol…I, in addition, have some “warm, fuzzy, and fond” memories of grabbing a 25 cents slice of pizza from “Frank’s Pizza Shop” down the block, and rushing (again, down the block!) to pick up the latest copies of my favorite teen magazines, including (but not limited to) 16, 16 Spec, Fave, and Tiger Beat. I do believe, but am not 100% certain, that “Tiger Beat” is ” the only one” that has, after all these decades, both “survived” & “thrived!” And so, to all of you ex-Brochures and current residents of ” Minerva Place” in “THE BRONX” (giggle, giggle), I bid you goodnight!!!

I live at 2 Minerva Place for 44 year . but I have to movie the build not the same but I love living here wish me luck finding somewhere nice