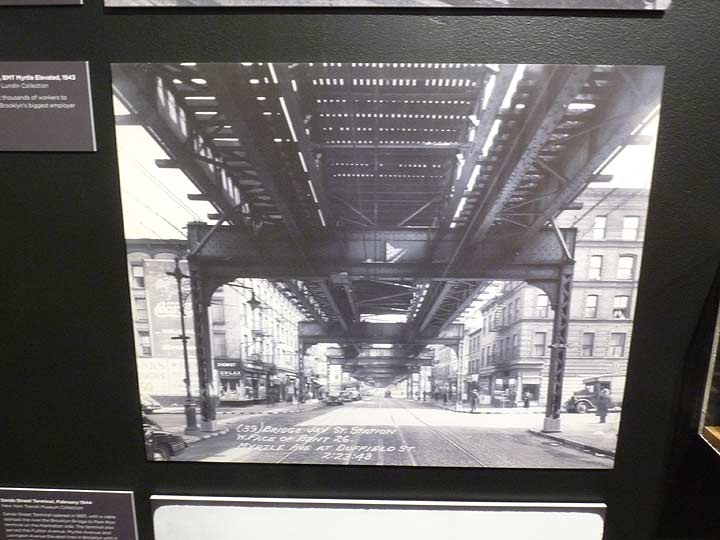 Myrtle Avenue, which runs from MetroTech in downtown Brooklyn all the way out east to Jamaica Avenue at Lefferts Boulevard in Queens, represents a lost opportunity for me, a treasure lost that I will never really be able to obtain. The avenue was laid out as a plank road in the 1850s and, as is well-known, hosted an elevated train route between Adams Street and Broadway between about 1888 and 1969. I only walked under that stretch of the Myrtle El once, in 1965; I was little and vaguely remember it, and I never did get to ride the old World’s Fair wooden cars that shuttled on the line until the end. A few years ago, I tried to recapture the old magic by walking Myrtle Avenue from end to end.

I was in the Transit Museum a short time ago to pick up a calendar and took a look at some of the exhibits. One of them was this photo of Myrtle under the el, looking east from Duffield Street. I don’t often do “then and now” posts, because that stuff has been done to death, but I couldn’t help remarking that everything in this picture has now disappeared. The buildings on either side of the street; the el itself; the Edison lampposts, used exclusively in Brooklyn; the trolley tracks. Everything on Myrtle except Myrtle itself. 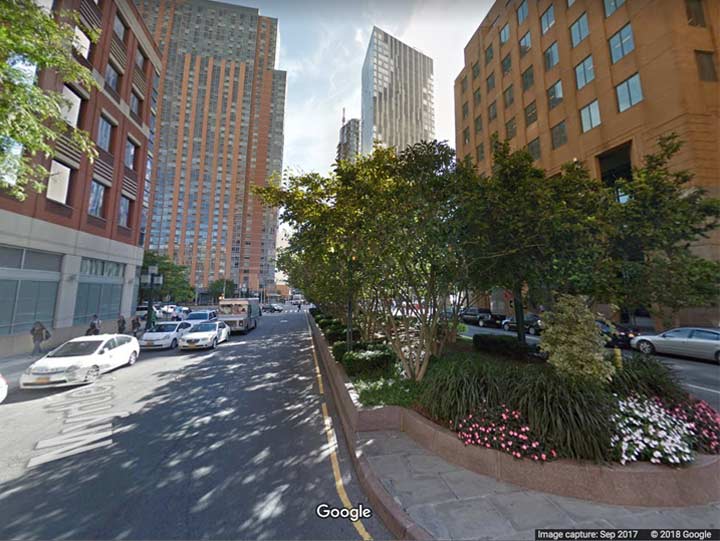 Myrtle, looking east from Duffield today. The drivable portion of Myrtle begins here these days; to the west, Myrtle is a pedestrian path through MetroTech Center, opened in the mid-1980s by Brooklyn Union Gas. In the years after the el came down, Myrtle Avenue’s flock of dwarf Deskey lamps still stood for a few years along with the brick walkup buildings that bordered the el. But MetroTech heralded the start of a new era.

The brick buildings came down, and gradually, high rise residential towers were thrown to the sky, obliterating everything from the 1943 photo. It’s not good or bad, as there have always been things I can’t afford. It’s just different.

I lived on Myrtle & Clermont until 1963. I have vivid memories of taking the El down to its end at Jay St (where we transferred to the Subway). The El trains actually had a seat on the outside of the cars, I found that fascinating.

When the photo was taken Myrtle El trains still crossed the Brooklyn Bridge to and from the Park Row Terminal. Lexington Ave. El trains also used the el in the photo. The Brooklyn Bridge service ended in March 1944, after which Myrtle and Lexington trains terminated at Bridge/Jay Streets and Myrtle Ave. Lexington Ave. El service stopped in October 1950. The Myrtle El continued to run south of Broadway, Brooklyn, until October 1969. Ever since, it has continued to run only north of Broadway as the M train. Until April 2018 it is further restricted to a shuttle between Myrtle/Wyckoff Aves. and Metropolitan Ave., as the viaduct connecting the Broadway El with the remaining Myrtle El portion undergoes a much-needed rebuilding.

“I don’t often do “then and now” posts, because that stuff has been done to death,”

In this case, there’s nothing wrong with that. “Then and now” comparisons can be great, depending on how similar the angles of both images are.

Dover’s “New York Then And Now” book from the 1970s is the definitive then-and-now book. An updated reissue is long overdue, especially since the “now” photos, all from the mid-1970s, can now be considered “then” images.

Amazon has much newer NYC “Then and Now” books. I believe Mr. Watson passed some years ago. Anyone want to try to get the same shots as in Mr. Watson’s book and share them?

I grew up on Duffield st between Willoughby and Myrtle Ave from 1956 until we moved in 1970. I miss the old Brooklyn neighborhood but everything changes. I remember the El and riding the subway on Myrtle Ave in the 60s. Walking down to the delicatessen near the Flatbush extension to get a frankfurter and a soda with my dad. So much time gone by. Great memories ….