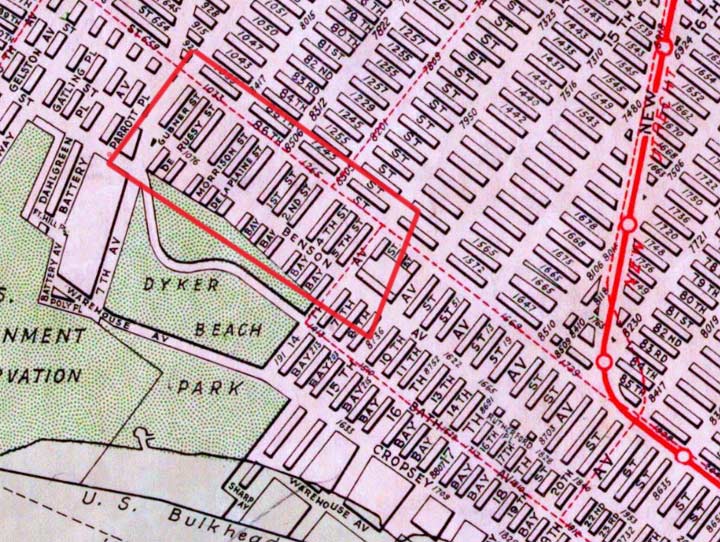 The map of Brooklyn has changed surprisingly little, at least on paper, since 1922. One exception to this is in the Dyker Beach Park area, where a number of streets have vanished since then. The park was first developed in 1895 when the architectural firm Olmsted, Olmsted and Eliot was commissioned to design a 50-acre park from the waterfront to about 92nd Street. The Dyker Land and Improvement Company owned the parcel between 92nd and 86th Streets and leased it to the Dyker Golf Club and Marine and Field Club, both of which used the still-standing 1898 field house as their headquarters. Poly Prep was unsuccessful in purchasing property from Dyker Land and Improvement for their new school, which they wanted to build at Dyker Park, but the NYC Parks Department offered them some acreage and Poly built its signature clock towered school on 7th Avenue south of 92nd Street.

The Dyker Beach Golf Course as we know it took shape by 1934 as the golf club acquired parcels between 86th and 92nd Streets, and the streets occupying the parcel were eliminated as the golf course was built.

On this map we see the streets between 7th Avenue and 14th Avenue south of 86th Street which were eliminated: Gubner, DeRussy, Morrison, Delaplaine, and Bay 1st, 2nd, 4th and 5th. DeRussy Street was named for General Rene Edward DeRussy (1789-1865), who helped design Fort Hamilton. A semicircular drive past the Dyker Beach Golf Course’s clubhouse was named for DeRussy in 2008, restoring the name to the map.

The slots for Bay 3rd and 6th Streets were occupied by 12th and 13th Avenue. The elimination of Bay 1st-Bay 5th  Streets is the reason for the current situation of the Bay streets beginning with Bay 7th, and the avenues’ taking the place of Bay Streets is responsible for the odd numerical sequence in Bath Beach of 17, 16, 17, 18, 19, 20, 19, 22, in which Avenues and Bay streets combine in an odd sequence.

Where the Bay streets are, in between each Avenue south of 86th St., there are two Bay streets. The Bay street will skip a number when an Avenue occurs. For example In Between 14th and 15th Avenues, you have Bay 7th and Bay 8th. 15th Avenue takes the place of Bay 9th. The next Bay street is Bay 10th, one block after 15th avenue. With a little counting by 3’s, it’s relatively easy to figure out what Avenue number is next to a Bay street. For example, with a little counting, you can figure out that Bay 37th St is one block after 24th Avenue. The Bay numbers catch up to the Avenue numbers at 18th Avenue, which is where Bay 18th would have been.

There’s a Fort DeRussy on Waikiki beach in Honolulu. The old ammo storage there was turned into a museum when they tried to demolish it (too much trouble, it was built to last!).

This is an amazing coincidence because I only drop into forgotten ny every few months. Also I’m born and raised in Hawaii but my parents and family are from Brooklyn. Not just Brooklyn but the dyker/burst/Canarsie area.

Interesting that some of the eliminated streets in Dyker Beach are all repeats in other parts of the borough: Ocean Ave, Atlantic Avenue, Lexington Avenue and New Utrecht Avenue.

I rented a second floor apt on 7th Ave at 90th St with a huge picture window overlooking the golf course–how many people in Brooklyn can say that? Came home from work late one night and found a goose sitting on my front stoop blocking the door. Had to shoo it away to get in. All my years in the “country” on Staten Island and I never had a goose on my stoop. Only in Brooklyn!

That little map section at the top is incredible…I pass here almost everyday. Does anyone know what old map that is? Maybe an old 1922 Hagstrom?