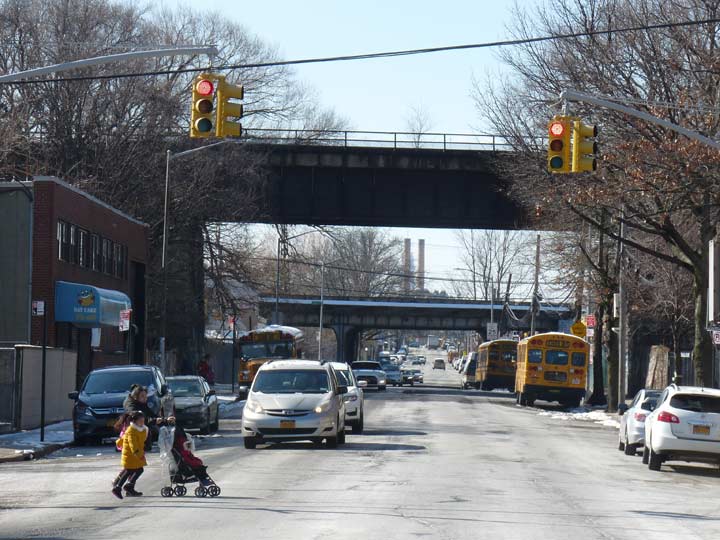 A classic picture of Deep Queens here at 51st Avenue looking west from Jacobus Street, an intersection only Elmhurstians might know. It is an eastern extension of Maurice Avenue, which runs northeast along Calvary Cemetery from a maze of roads where Maspeth Avenue meets 58th Street in Maspeth into Elmhurst, becoming 51st Avenue at 69th Street, known to the ancients and MTA signmakers as Fisk Avenue. The road was named for a prominent 19th Century local, James Maurice (1814-1884) who served in the House of Representatives from 1853-1855. He is the co-founder of the former St. Saviour’s Episcopal Church congregation and the founder of Mount Olivet Cemetery, where he was interred.

In the foreground the NY Connecting Railroad crosses 51st Avenue. It is a freight railroad that runs between the Fresh Pond railroad yard in Glendale and the Oak Point Yards in the Bronx, crossing the Hell Gate Bridge. In the background the main Long Island Rail Road crosses the avenue and in the far rear are twin smokestacks of the Department of Sanitation plant adjoining Mount Zion Cemetery. Barely seen through the trees to the left of the ‘stacks is #1 World Trade Center.

I call that overpass the demarcation betwixt Woodside and Elm.