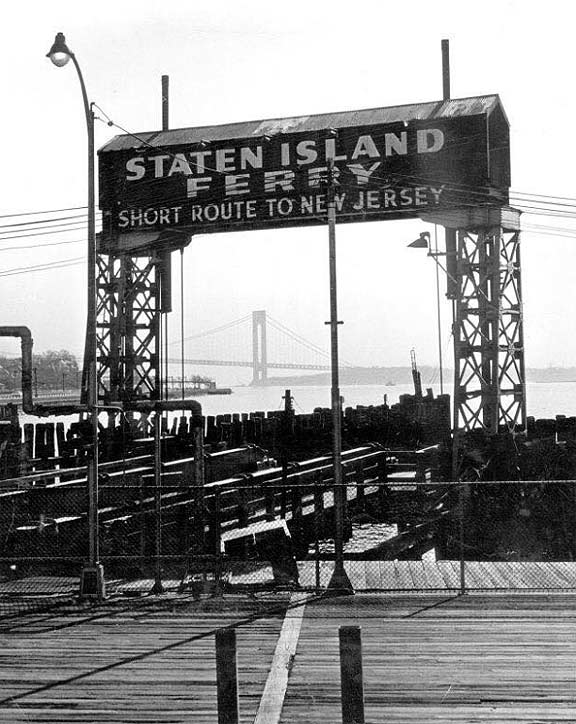 A consequence of the construction of various bridges connecting Staten Island to surrounding territories has been the end of its myriad of ferry services. The empire of Commodore Cornelius Vanderbilt began in the 1810s when he instituted the first ferry service — by rowboat — between Staten Island and Manhattan. Turnpikes such as Richmond Terrace and Victory Boulevard were built to carry wagon traffic from one ferry to the other. The Tottenville ferry to Perth Amboy survived for several years after the twin spans the Goethals and Outerbridge Crossing were constructed.

Until I was age 7 my family and I traveled to St. George, Staten Island via a ferry at the end of Bay Ridge Avenue (69th Street) and from there, bussed to virtually any point on the island we favored, even as far as Tottenville. Staten Island was largely rural at the time with lots of empty fields and forests, especially on the south end. I was fascinated by the way everything looked so out of date, street lighting and signage-wise (I got into this kind of thing early).

The St. George Ferry closed 11/22/1964, one day after the opening of the Verrazano-Narrows Bridge, seen here in this unique shot from the ferry landing in 1966. In my mind, there should have been room for both, but Robert Moses and the Triborough Bridge and Tunnel Authority thought differently.

There were long lines on both sides on weekends. The boats were running every 10 mins. but could not keep up. What was lost was a shorter ride for pedestrians to Brooklyn. Now you have to take the ferry to Manhattan then a subway to get where you want to go in Brooklyn. The bridge bus is a longer run than the old green and white from the North shore.

I knew it as the 69th Street Ferry, and it was an integral part of my commute to Wagner College in the first few months of my freshman year. Occasionally my family would visit relatives in New Jersey. We’d line up with the rest of the cars on 68th Street, alongside Owl’s Head Park, waiting for our turn to board the ferry to St. George. I think it may have held 50-60 cars, and the attendants would make sure you utilized every square foot of parking space. Once parked, we’d get out and go upstairs to view the harbor. A pleasurable experience!

Never saw this ferry in person, but used to pore over my dads old Hagstrom atlases and was always intrigued that this route was labeled as “electric ferry”.

We also called them Electric Ferries That was written on the sides in large lettering……all steel except for the wooden benches upstairs in the cabin..Very spartan…did the back and forth job very well……I used to take the IRT from Flatbush to Bowling Green and walk to the Staten Island Ferry…enjoyed the great boat ride and of course a hot dog and drink..then get off at St George and next door was the 69th Street Ferry…..One had to go upstairs to the Cabin for the fast ride….There was a choice of two bus lines at the Brooklyn end which led home with a change of buses…..Very nice memories..They could have kept them going, at least for several more years……

AHhhh, all of the good old things which made NYC interesting and tolerable, are gone.

THIS is the very sort of thing I come to this website for, though. Things I may not have otherwise known about; and certainly which, even if I know of, have never actually seen. I wish the site were focused more on the things of old which longer exist.

Current street scenes, replete with ugly modern cars, and an infrastructure designed for herding humans like cattle, are why I left NY 16 years ago. All of the uniqueness and glory and never-ending interest which NYC once held are long gone.

I remember many times taking that ferry with my family to go visit relatives in Philadelphia. Also going on it with the Boy Scouts to get to Camp Pouch on Staten Island.

Good old Camp Pouch! Our Scout troop met at PS 48, on 18th Ave and 60th St. On many Friday afternoons we’d pile on the 60th St bus with our overnight packs for the ride to the 69th St ferry. I have no idea what busses we took from St George to Camp Pouch, but for a kid from Brooklyn, it was an adventure into the wilderness! I hope it’s still there.

Yes Pouch Camp is still there.

The company that ran the boats was called Electric Ferries, thus the name on the boats. It seemed strange for a ferry to be electric, they were actually diesel electric.

I lived on Lefferts Ave. near Ebbets Field. In the middle ’60s my friend moved to 67th St. Between 4th and 5th Avenues. Used to ride my bike to his place. Beside other adventures,we would ride the ’69th St ferry back and forth to Staten Island. because it cost a nickle at that time, when we got to Staten Island we used to hide in the bathroom standing on the bowls until the ferry was getting ready to leave for Brooklyn. (Wow, what a flash back)

In the 1970’s I went with a friend to Disney World (pretty new at that time). We took the monorail (the pink one) and had a good time in the park. As we were going back to the parking lot, we found ourselves getting onto a ferry boat. I looked at it and looked at it again and said this is the Brooklyn Ferry, I’d know it anywhere! My friend said no it can’t be. I said, Don’t tell me, I used to ride it all the time with my parents. There was a large person standing in front of the outer wall of the ferry and suddenly this person moved. There is was, a bronze plaque state that this was once the Brooklyn Ferry!

Unlike the old SI-Manhattan ferries, the old SI-Brooklyn ferries had relatively small passenger space compared with car space. We would take our car onto the Brooklyn boats from SI to go to Coney Island and other beaches, etc.

I’ve heard that after the Brooklyn Bridge opened some of the ferries kept running from Brooklyn to Manhattan (I haven’t been able to find data on this) because horse-drawn carts found it hard to negotiate the steep ramps so they continued to use the ferry. I remember very well the 69th Street ferry from Bay Ridge though. And no horse carts at that time.

Wow thanks for the memory…when I was little ( 1950’s ) my grandmother and I would take what we called the Brooklyn ferry to go visit relatives in Flatbush….would get off the ferry and take the bus to DeKalb and change bus to get to Flatbush Ave and Kings Highway….on the way home to SI before changing buses would stop to bring home a Juniors Cheesecake or a marble cake from Cookies….nice.