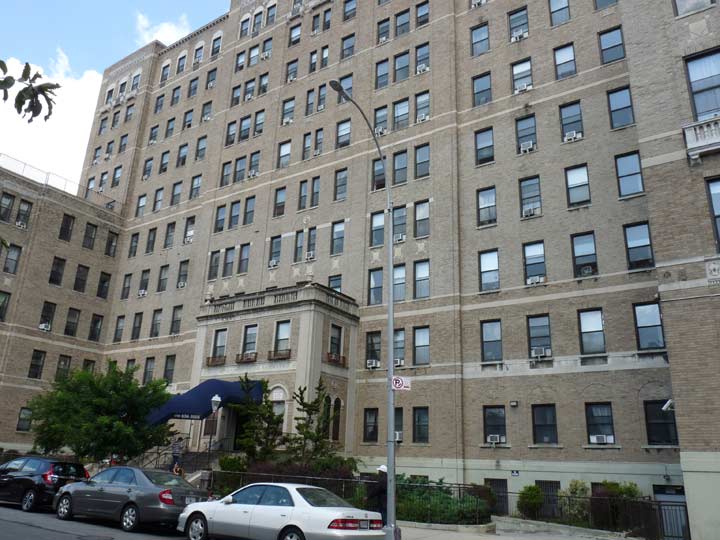 In 1903, the Brooklyn Hebrew Hospital Society purchased property along Classon Avenue belonging to the Memorial Hospital for Women and Children, and spent three years fundraising and acquiring additional properties, opening to patients in December 1906. Even more property was acquired in 1928 that was used to build an additional wing.

After several decades, Jewish Hospital’s fortunes declined along with the neighborhood. In 1983, it merged with St. John’s Episcopal Hospital to form Interfaith Medical Center. Ultimately Interfaith moved out, and the vast property became residential units (much like my old high school, the nearby Cathedral Prep, did in 1985).

I have a personal memory of Brooklyn Jewish Hospital. I went in there just once, in 1975, to visit an ailing classmate in high school, Fred Costanzo. Though Fred was undersized, he was an agile athlete and active in our school’s extracurricular activities. Late in our senior year, Fred contacted leukemia and though he seemed upbeat when I and other friends went to see him, he succumbed during the summer in an era when there were not the life-extending treatments for leukemia available today.

Thus, I always feel the pull of nostalgia when I’m in Prospect Heights and walk past the old place.

I remember Brooklyn Jewish Hospital, spent a lot of time there as patient. This was in the 1950 to 1962 time and I went back forth to the children ward. I remember the walls were painted with complete stories like Ferdinand the Bull and stayed this way for years, this made my stay a little easy. They also had a children’s play room with toys and games. I had visited the hospital later as an adult to see a friend’s child and was sorry to see the walls were painted over.

I also spent time often at Brooklyn Jewish besides being born there in 1953 at the age of five I had kidney surgery and then at the age of twelve and fourteen was hospitalized for minor back issues. I remember well the children’s playroom also the nurses student nurses and I’m guessing residents and interns were warm and friendly. In those days your parents didn’t stay with you overnight.

YES! I WAS BORN THERE IN 1953 AS WELL. ONE THING ABOUT THEM THEY TAKE GOOD CARE OF THEIR PATIENTS.

Hi
I was born July 13 1952 at brooklyn Jewish hospital.
How can you find the file of when you where born from that time
Does any one have the number and name of the new hospital.
What would have happened to the old files? Can anyone reply?

Did you ever hear how to find the records from Brooklyn Jewish Hospital from past years? I was born in 1964 and I am trying to get a copy of my birth certificate.

I was hit by a car right after my 3rd grade Catholic school term had begun in 1948. I woke up in an ambulance where my older brother who was accompanying me to the hospital asked me if I knew what had happened. I was able to tell him I had been hit by a 1947 Packard. My brother and ambulance attendants were amazed. I awoke again in the hospital several days later and was amazed to hear all the nurses saying Happy New Year! I thought I had been unconscious for months. I will always remember how friendly and. bubbly the nurses were.

As a kid during the late 1950s and early 60s, I went for weekly allergy shots at the Jewish Hospital’s low-cost public clinic.

The wait was always endless. The wooden benches were hard. The gloomy, echo-filled hallways went on forever. And I’m sure more than one kid made a snack out of the lead-based paint that flaked off the institutional green walls.

The place had all the “charm” of a Victorian madhouse. Like something out a Dickens novel. And though I probably received thousands of shots over many years, my allergies never really went away.

I went there in 1951 to ER with a broken arm. My sister Kay Morris Barton had her appendix out thete. It was our neighborhood hospital.

LOOKING FOR SOMEONE THAT WAS BORN THERE . I WOULD LIKE TO KNOW IF THE TIME OF BIRTH WAS IN MILITARY TIME . THERE APPEARS TO BE A MISTAKE ON MY BIRTH CERTIFICATE

I was born there in the mid-1950s. The time on my hospital certificate is *not* in military time. I was born around 8 p.m., and the time is recorded that way. I hope this is helpful.

I was born there in 1967 at around 3am, and it is not printed in military time.

I was born there in 1944; time recorded is not in military time.

I was born October 15, 1956. My doctor’s name was Fred Sapio. I lived on St. Marks Avenue between Vanderbilt Avenue and Underhill Avenue.

I was born there in December 1949. Lots of changes in Brooklyn since we were born there!

My brother was born in 1964. We grew up on Herkimer Street in Brooklyn. As a result of a school football injury he incurred hip surgery at BJH. At that time this hospital was one of the BEST in Pediatric Orthopedic Surgery! The surgeon was phenomenal – I wish I could remember his name however, we are Blessed to have had a hospital during a trying time. Thank You for being a historic part of BROOKLYN.

My brother was born in 1964. We grew up on Herkimer Street in Brooklyn. As a result of a school football injury he incurred hip surgery at BJH. At that time this hospital was one of the BEST in Pediatric Orthopedic Surgery! The surgeon was phenomenal – I wish I could remember his name however, we are Blessed to have had a hospital during a trying time. Thank You for being a historic part of BROOKLYN.

I was born there May 12 1946. I lived on prospect place between nostrand and rogers

My dad worked there for our forty years in maintenance and plumbing. He was so proud to have that job and even when we moved to Co-op City in the Bronx, he would take the train to work. He refused to apply to Montefiore which would have been a much shorter commute. I never understood why until one day he was injured on the job and had to stay as a patient. It was one family. All the visitors in the hospital who came to visit and to wish him well. He left for retirement when the hospital moved to Atlantic Avenue after becoming Interfaith. He said it was not the same. Good memories. He would have loved to see his Brooklyn now and how it is coming back to life.

Does anyone know the street address of the hospital back then?

Am trying to do the same for my daughter without success. I hope you were sucessfull

I was born in Brooklyn Jewish Hospital in 1940

I was born on Jan 5, 1957, at Prospect Heights Hospital . I was conceived by artificial insemination my mom working Dr. Irving Lieberman. I’m trying to find information about him. And specifically if I have any half siblings.

My grandmother went to their nursing school in the 1930s. She used to refer to it as the Judische Krankenhaus. She had a lot of fond stories about the place. She had my mother there in 1940.

I was born there my dad was doing his training as a pediatrician. I was born 28 March 1955

Was this hospital ever referred to as Brooklyn Doctors Hospital. I was born there 12/23/52.

I was a medical student, intern and resident at JHB in the sixties. All 3 of my children were born there and my wife to be trained in their nursing school. It was one of the finer teaching hospitals associated with Downstate Medical Center medical school. I was very disappointed to learn that it no longer exists as a full service institution. We have many fond memories of the place.

I worked in their Personnel department back in 1977 Nice people. At that time however, the neighborhood wasn’t very safe but it had great character. Sorry to hear that the hospital no longer exists.

Gave birth to my first child at BJH in 1966… I was 19 yrs old. “Firsts”always have a special place in our memories, as this does for me.

I had my appendix out at Jewish Hospital in 1954. Being there made me want to become a nurse. I graduated from BJC School of Nursing in 1959 and worked in the OR for one year. From the day I walked into BJC it felt like home. So sad to see it is no longer viable.

I do not have fond memories of the BJH… In fact… It is a nightmare to me. My mother sent me there on a Greyhound bus… Alone… Under age, to have an abortion performed on me at 25 weeks gestational. My Baby was injected with poison to kill it and I was induced and forced to deliver a dead baby boy. I will never forget this nightmare that happened to me in December of 1979. They told me I had no rights. While I was there… There was an 11 year old girl going through it as well… With many other young girls… It was the most horrible nightmare I ever experienced. The doctors and nurses there were completely heartless. My own mother was heartless.

Did a doctor (immunologist and/or oncologist) named Chester M. Southam work there? He was reported to inject live cancer cells into 22 people

Yes I was in the bklyn jewish hospital at the age of 14yrs old in (may 1983..July 1983)I had my spleen removed and the time I been there I had a blood transfusion the blood was tainted with HIV+AND THE DOCTOR WHO TREATED ME KNEW WHAT HAPPENED D.R.DAVID DIAMOND PEDIATRIC HEMOTOGOLY DOCTOR AND DIDN’T INFORM ME NOW ITS BEEN 37YRS I BEEN LIVING WITH HIV+AND DEVELOP MORE MEDICAL COMPLICATIONS IN MY LIFE SMH THAT WAS WRONG & 2021 I WHAT JUSTICE TO BE SERVED.FOR ME AND OTHERS WHO THAT HOSPITAL GAVE BLOOD TO IN 1983 VEFORE THEY COMBINED WITH INTERFAITH HOSPITAL IN BROOKLYN N.Y.

I was born there in 1974 ,got hit by a car in 1980.was in a body cast up to my neck for a year.they saved my life 1st time.a few years after that climbing my godmother wall unit.it fell on me had a piece of stuck in back of my head,saved me again.i got life 3 times from there.will aways be remembered.