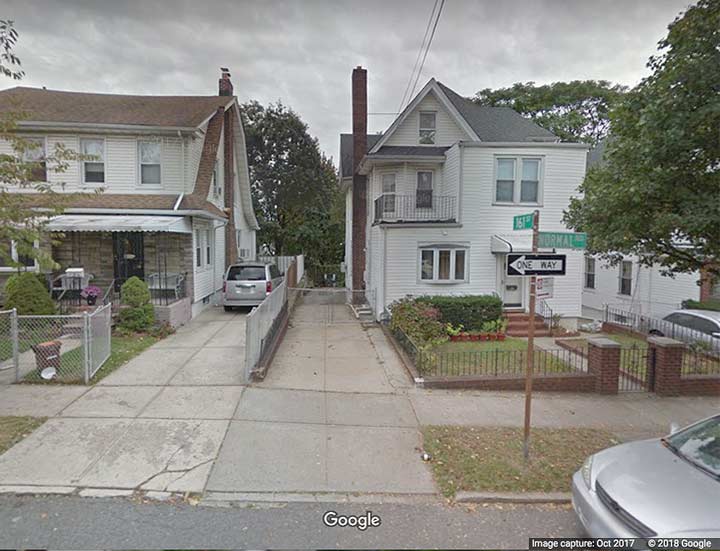 A short road zig zags in Jamaica Hills between Parson Boulevard and 162nd Street in Jamaica Hills, a few blocks north of the main drag, Hillside Avenue. It’s a pleasant enough street, lined on both sides with one or two-family homes, and shady street trees. It’s like a lot of New York city streets, normal on every way. In fact it’s Normal in every way. 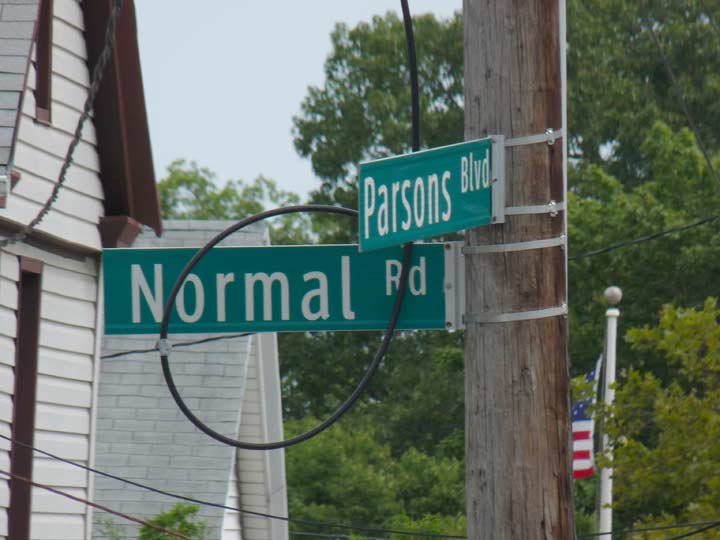 At first, the reason behind this name wasn’t immediately apparent, at least in Queens, but I remembered Normal, a mid-sized town in central Illinois, and researched that name. In the 1860s it adopted the name from Illinois State Normal University; in turn, normal schools are teacher training schools and are so-called for teaching standards, or norms. Perhaps there was just such a school in the area at one time, and Normal Road is named for it. 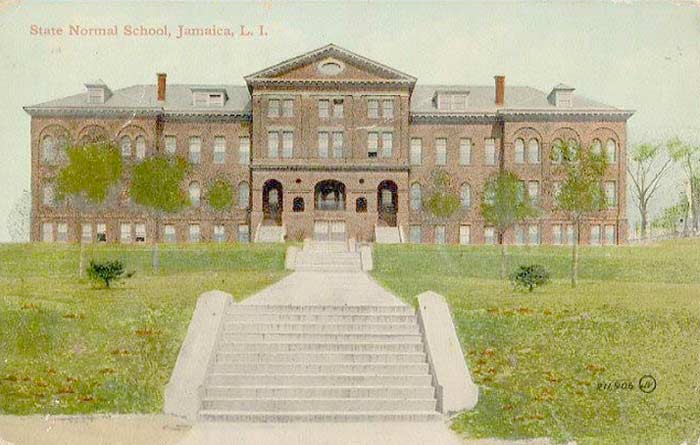 ForgottenFan Allan Rothman: PS 86 and Hillcrest High School (where my wife and I taught for many years) was built on a parcel at the corner of Highland Avenue and Parsons Blvd. which used to be the site of the “Normal School” which was razed in the late 1960’s I believe, to build the two current school buildings. (Click the link for a NY Times article on the school)

Normal Road is historic in more ways than one. It runs along the path of the New York and Queens County Railway — a trolley line that connected College Point, Flushing, Pomonok, Jamaica Hills, and Jamaica. The line ran in a right of way on a relative straight line on today’s 164th Street south from Flushing Cemetery, turning southwest at what became Normal Road, and then south again on a right of way adjacent to Parsons Boulevard, east on 90th Avenue and then south on 160th. When 164th Street was built in the early 20th Century it assumed a route adjacent to the trolley line and then absorbed it, becoming a wide 4-lane traffic route.

Jamaica Training School. My father and my uncle, both graduates. Two years after high school and into the classroom.

New York and Queens County’s rail route alongside Normal Road and 164th Street is today’s Q65 bus route. The trolleys were replaced with buses in 1937 under the auspices of Queens-Nassau Transit Lines, the successor to NY and Queens County’s rail system. The buses did not use the private r.o.w. alongside Normal Road,; instead buses operated on 164th Street and Hillside Avenue south of the Grand Central Parkway, and continue to do so today.

Queens-Nassau also operated the parallel Q24/34 route along Parsons and Kissena Boulevards, which was a bus route from its beginning in the 1930s. Queens-Nassau was renamed Queens Transit Corp. in 1957; for many years it was a corporate sibling to Streinway Transit Corp.’s bus system. The firms merged in the 1980s and were re-christened Queens Surface Corp. in 1988.

In 2005 Queens Surface became part of the MTA Bus Company as part of the public takeover of the last privately-owned bus networks in NYC. In 2007, both routes, Q65 and Q25/34, had their common south terminal (originally 160th St. and Jamaica Avenue) extended to the LIRR/Subway/Air Train station at Sutphin Blvd and Archer Ave.

PS 170 ELEMENTARY SCHOOL. I WAS THERE FROM K-4TH GRADE. IT WENT FROM K-8 GRADE. BEHIND THE SCHOOL WAS THE NY&Q row WITH MOST OF THE WOOD TIES EMBEDDED. i WALKED IT MANY TIMES. TRACKS CROSSED PARSONS BLVD IN COBBLESTONE AND CURVED DOWNHILL TOWARD HILLSIDE AVE AND THEN TOWARD 160TH ST. AND JAMAICA AVE. I BELIEVE MS. TENROSEN WAS PRINCIOPAL AND THERE WERE 2 MCDONOUGHS, YOUNG AND OLD. NEVER UNDERSTOOD WHY BUSES DIDN’T USE HIGHLAND AVE INSTEAD OF VERY STEEP 164TH ST.

Allan Rothman, and his wife, Mrs. Rothman, were among the best that Hillcrest dared to offer. I fondly remember them both. Mr. Rothman taught a tv/radio course if I remember correctly. What I remember most about him was his gently nature and quiet disposition. He was a true educator, for he loved to teach and converse. He was truly interested in what I had to say, and he wasn’t easily offended, for he had a great sense of humor. I remember how he sat quietly; he’d always cross his legs twice like a twister as he was a tall man. I would always wonder how he managed to bend his legs like that and still be comfortable. I think he was left handed, and so I chalked it up to on of those things I wouldn’t understand because as a righty I saw the world more linear. I saw the above post and noticed his Username was “ForgottenFan”. Sir, you are all but forgotten. It is some 23 years later, and I still remember your kindness. #GreatTeachers #GreatnessWillNeverBeForgotten