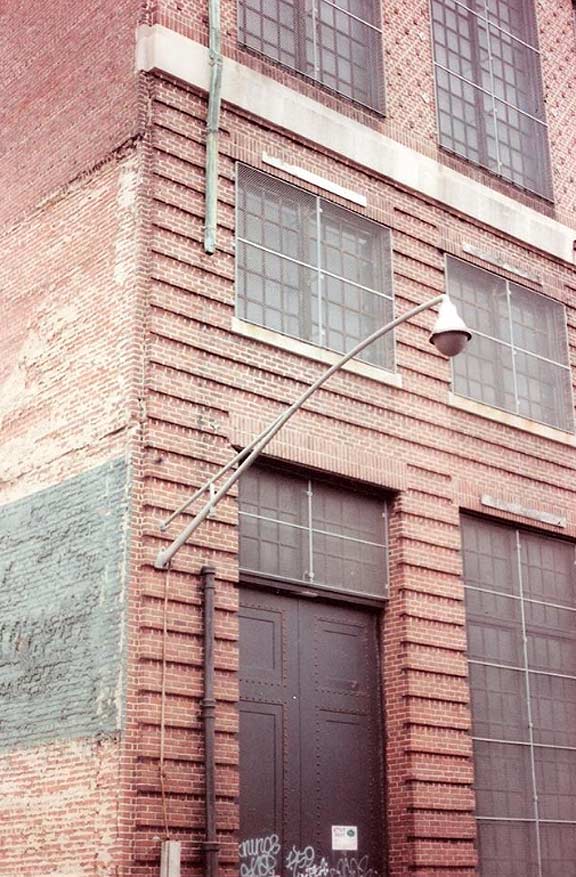 From NYC King of Lampposts Bob Mulero’s collection comes this photo of a 1950s-era wall bracket map from somewhere on South Street; the street has maintained very few of its older buildings, except those in the Seaport area that have been given NYC Landmarks Preservation Commission protection, so this building and its lamp are long gone.

NYC has a tradition of lampposts mounted on walls. It was done for two reasons: a) the sidewalk is too narrow to support a regular pole, or b) there are trucking concerns in the vicinity and the city would rather not risk a truck backing into a lamppost and toppling it. There are two solutions to this — install a regular pole, but place it close to a building — if the truck hits it the danger to pedestrians and motorists may be alleviated — or do what has been done here.

The bracket we see here pulled double duty. It was generally seen mounted on telephone poles and NYC still has a few hundred specimens of this type still in use, with twin brackets supported by a crossbar. On this one, the crossbar extends a little further down. Had there been a fire alarm here, the round orange fire alamrm lamp would have been mounted there.

The ls a Westinghouse AK-10, which battled the Bell and Gumball (they have official, but boring, names) for supremacy on NYC streets until the early 1960s. They shone a bright white incandescent that faded to yellow when wearing out and were dulled when dirt collected in the glass reflector bowls.

In many cities in Europe, it is common to see street lamps attached to exterior building walls. That’s because the often-narrow streets don’t have room for a vertical pole to be anchored on the sidewalk, which may also be very narrow.

I would be curious to know what arrangement the City made with private property owners when wall bracket street lights were installed on their buildings. There would have to be some kind of easement granted to the City that would be recorded in the County Clerk’s office, especially since electricity had to be provided to the light. Or, perhaps as is done now, the City simply charged the property owner a fee for having a City street light which benefited the property by lighting it.

I remember these from the 1970’s. Do not know when they disappeared. This is the same design used on free standing posts on the Grand Central, Clearview, & Shea Stadium parking lot. I miss Shea Stadium and am not impressed with Citifield. If only Doubleday retained ownership of the Mets and not the brain dead Wilpon & Son.