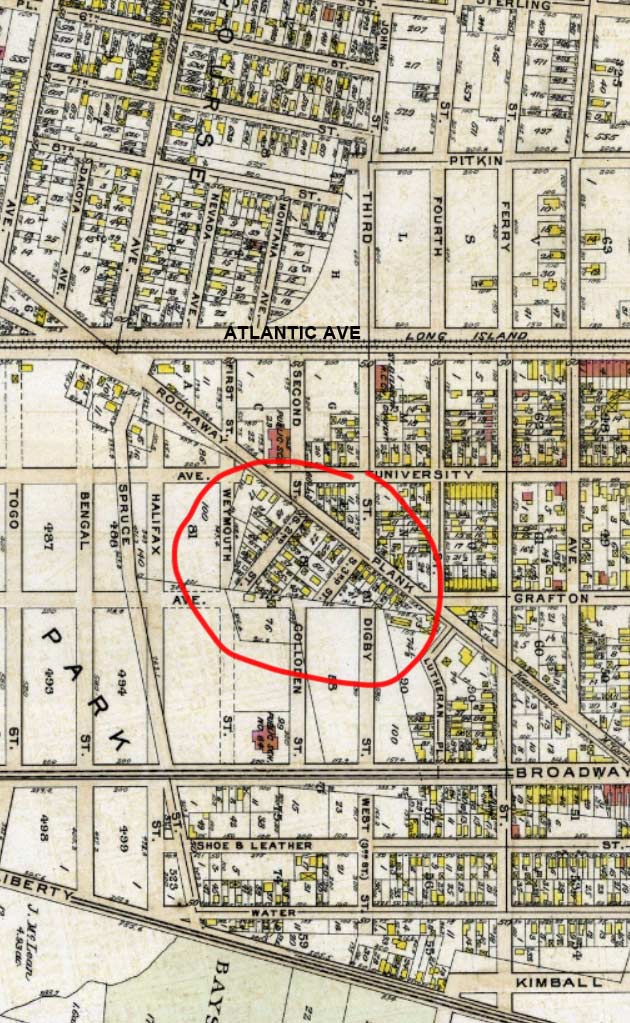 At first hearing, “Culloden and Digby” sounds like a heavily-advertised TV law firm, or perhaps a brand of Worcestershire sauce, but they are actually a pair of streets in Woodhaven that are  areminder of Woodhaven’s small-town past, when it was known for a time as Woodville.

Take a look at the 1909 Bromley view of western Woodhaven. Atlantic Avenue bisects the map, supporting then as now the Long Island Rail Road. Before the 1940s, the railroad ran down the middle o the street; it was only suppressed in a tunnel after about 1940-1942.

Rockaway Boulevard runs from the Brooklyn border at Eldert Lane and 90th (Ridgewood) Avenue southeast past JFK Airport and across the Meadowmere marshes to the Five Towns in Nassau County (specifically, it is the boundary between Inwood and Cedarhurst) where it’s called Riockaway Turnpike. The “Turnpike” portion preserves an old name, since Rockaway Boulevard was once known both as Rockaway Turnpike and Rockaway Plank road for its full length as it was once a toll road. In the early 1800s, the roadbed was made of planks, but engineers found this an unsatisfactory means of pavement (winters would be hell on plank roads) before the macadamization process produced the black pavements we know today. Older buildings, like the veterinarian above left, mark the route as an old highway.

In the 1920s, the Queens portion became a “Boulevard”. It’s rather sleepy as main Queens routes go, though there’s a theatre and a cluster of businesses at its junction with Woodhaven & Cross Bay Boulevards and Liberty Avenue. In the 1970s I was fascinated when, bicycling from Bay Ridge to Rosedale, I found a cache of very old castiron lampposts along the boulevard near the airport. A few of them persisted until about the year 2002.

On the map I have circled two small streets, South 1st and South 2nd Streets, that intersect Rockaway Plank Road perpendicularly, but are athwart the otherwise street grid.Just south are a pair of streets labeled “Colloden” and “Digby.” Also note Lutheran Place, which zigs and zags for some reason between Broadway, now 101st Avenue, and Rockaway Boulevard. 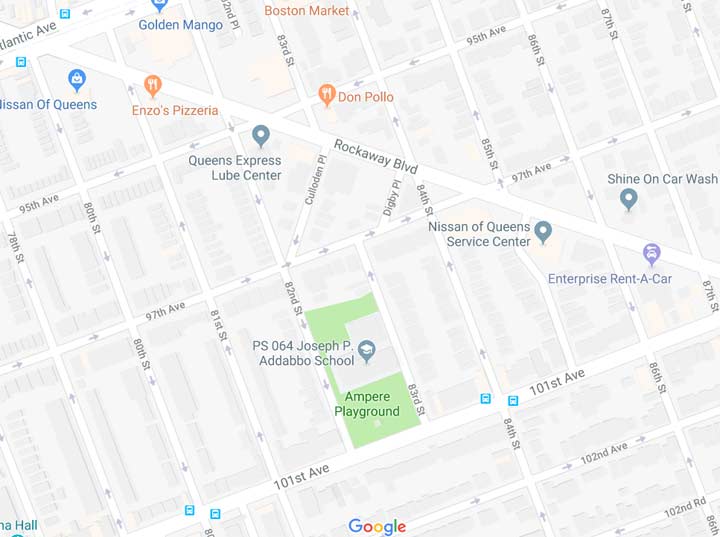 On today’s map “Colloden” became “Culloden” and while Colloden and Digby Streets became 82nd and 83rd Streets, somehow, it was decided that those names should be preserved, and slapped onto the two short streets that had been S.2nd and S. 3rd.  As an aside, also note that Lutheran Place retained its curve but is now called 85th Street.

Other, more colorful aspects of the 1909 map have disappeared. Spruce Street, a slanted route that seemed to be on an overpass, has disappeared; and Shoe & Leather Street is now prosaically known as 102nd Avenue. 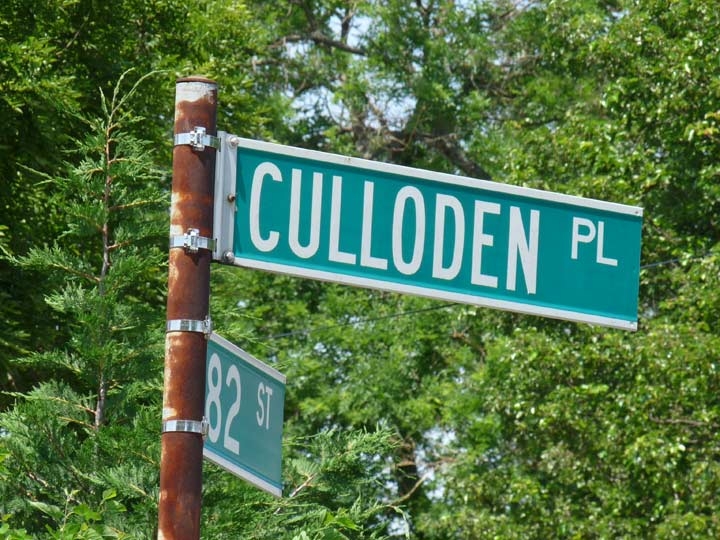 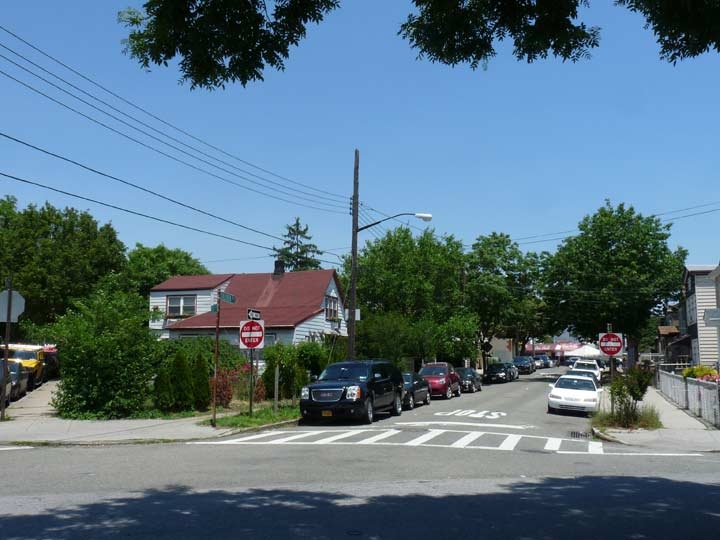 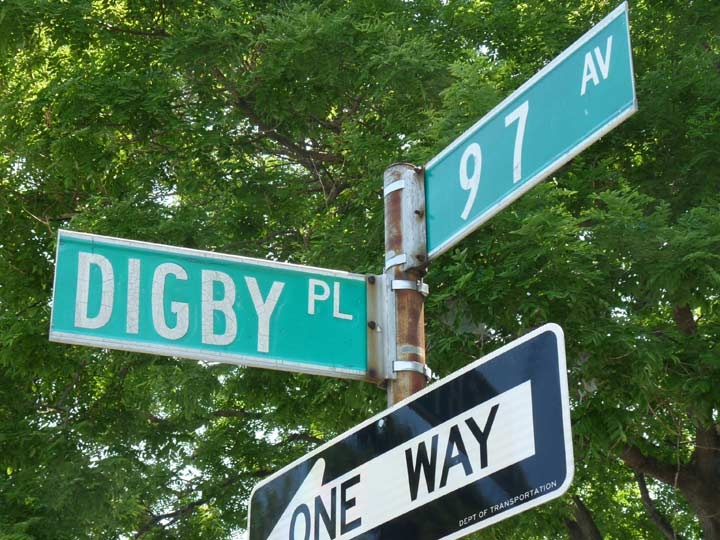 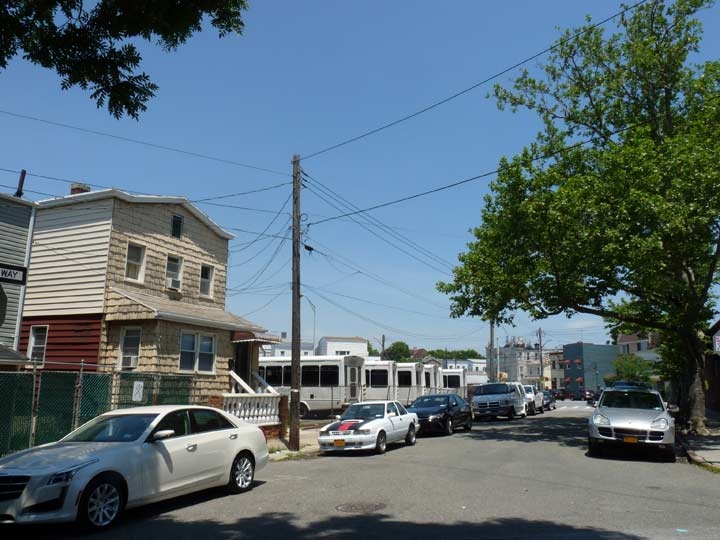 Today, Culloden and Digby Places are short, green residential streets off Rockaway Boulevard, and their residents are no doubt unaware of the part their names play on a former map of Woodhaven.

Culloden is the Scottish town where Jacobite forces loyal to Bonnie Prince Charlie fought their final battle against the English in 1746. They suffered a massive defeat, and Scotland lost its independence forever.

This is not Woodhaven, which ends at Atlantic Ave., This is Ozone Park.