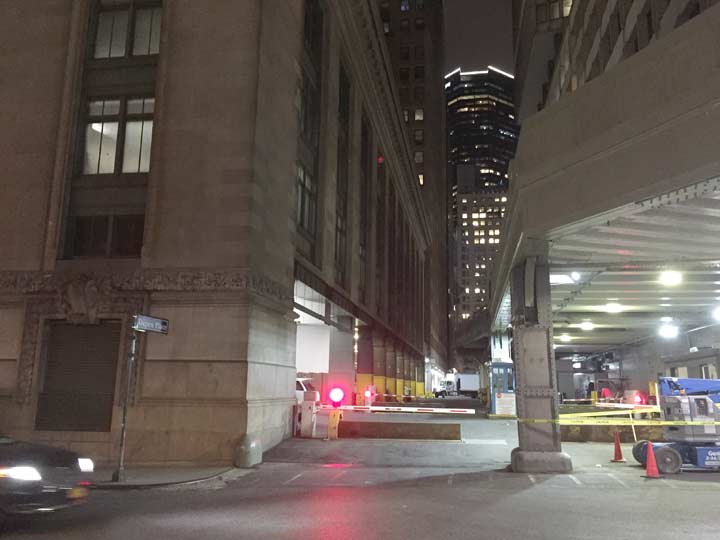 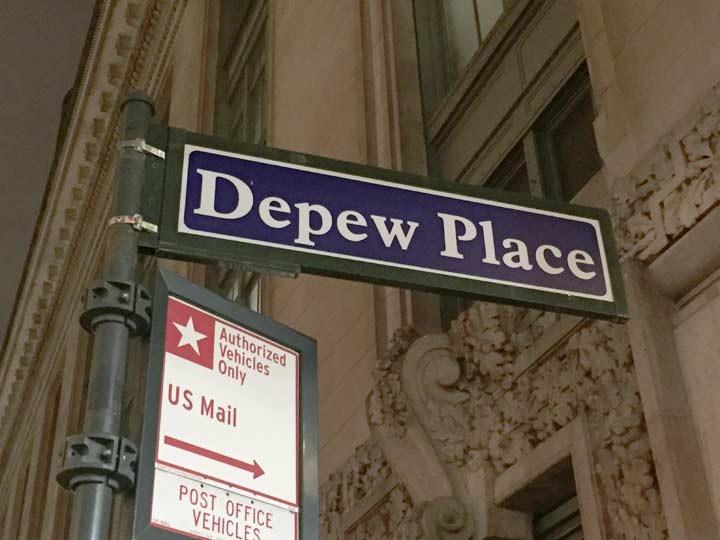 For decades, the Department of Transportation hadn’t marked Depew Place, which today exists as an alley on East 45th Street under the Park Avenue Viaduct as it snakes its way around Grand Central Terminal. However, I noticed that the city is indeed now marking it with one of those illuminated street signs in blue and white, using the Plantin font, that the 34th Street Partnership installed, along with generic-looking streetlamps in the early 1990s.

Today the alley is used only by Post Office trucks and leads to loading docks behind the Grand Central Post Office at 450 Lexington Avenue, constructed in 1909 and topped off by a 38-story office building in 1992. 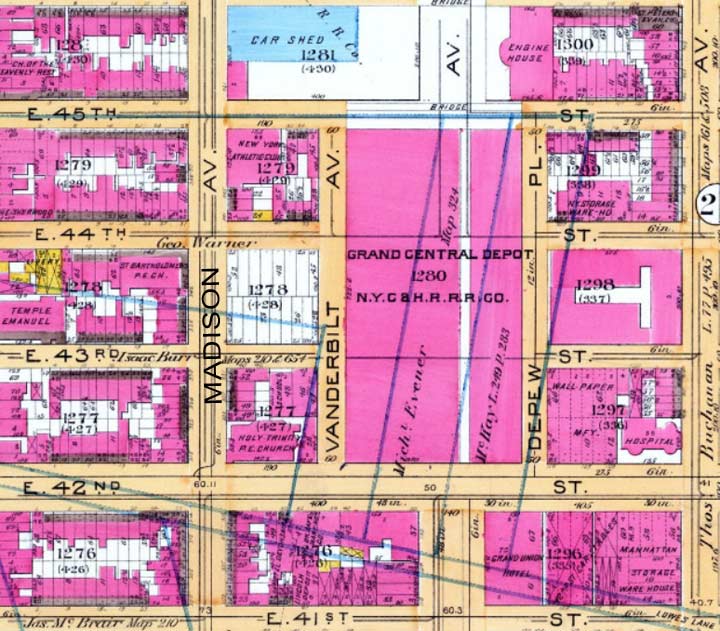 Depew Place, meanwhile, was named for an obscurer figure, Chauncey M. Depew (1834-1928) New York Secretary of State and President of the New York Central Railroad. Commodore Vanderbilt convinced him to leave his Japanese ambassadorship at age 32 (he was a gifted public speaker) and work for him at the NYCRR, and he later headed it as president.

The above 1891 map shows both Vanderbilt and Depew Place on either side of the depot. When a new Grand Central Terminal was constructed in 1913, Vanderbilt Avenue continued its prominence and actually gained two blocks north to East 47th; there have been plans on the drawing board to convert it to a pedestrian mall for several years.

Depew Place, however, has been truncated back to its present ignominious status since the Post Office was constructed in 1909 and Park Avenue was bridged on a viaduct around GCT and the Helmsley Building in 1919. The city has started marking it again, at least.

In the days before 9/11, I used the Depew Place offramp from the elevated section of northbound Park Avenue as a short cut to East 45th St. Few drivers beyond cabbies seemed aware of it, as it was not clear from the viaduct where the ramp led. When driving passed the exit on 45th St., it looked more like garage access that a street, although there was a stop sign. The savvy short cut ramp was closed for security reasons concerning GCT. Nice post!

Chauncey Depew may have been an obscure figure compared to Vanderbilt, but he had what must have been a remarkably long lifespan for his time.

Appropriately, in Western New York there is a Village of Depew (in Erie County, adjacent to Buffalo). Amtrak Empire Service trains stop there (Buffalo-Depew Station). The route was once part of the New York Central Railroad’s main line between Grand Central, Albany, and Buffalo.

Indeed, Chauncey Depew was definitely not obscure. Rather the eminence gris to the Vanderbilts and the railroads. “My Memories of Eighty Years” (1921) is a fascinating read; photos of his house are in the MCNY.

DEPEW PARK IN PEEKSKILL NY HIS HOMETOWN CELEBRATES HIS LIFE

In the early 20’s Chauncey Depew was attending a formal dinner and was seated next to the opera singer Mary Garden, who was wearing a revealing strapless gown. Depew, in admiration, asked her what kept her dress up. She replied, “Two things: your age and my discretion.”

Are people allowed to walk on Depew Place? Looks like a secured area.

Is this an appropriate way to put to you an unrelated NYC history you may be able to answer? If you reply that it is l’ll send it to you. It’s Queens-related.

I grew up in Depew, NY, named after Chauncy Depew. The Depew Historical Society notes “Then, Chauncey Depew came to the rural community. In 1893, at the peak of the Industrial Age, a group of investors envisioned the area as a prominent center of commerce – an integral rail link on the lines between Chicago and New York City. This vision was enhanced by the area’s proximity to Buffalo, which at the time was one of the nation’s greatest railroad centers. By 1893, more than 250 trains entered and left the city each day. It was viewed as a profitable place to invest.”