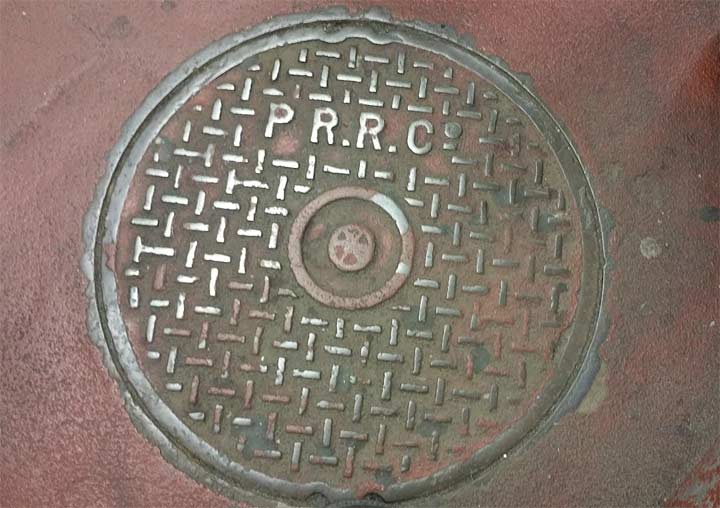 In New York City, many name brands have come and gone over the years.  Chobani yogurt, Whole Foods, Dunkin’ Donuts and Yelp.com, to name a few, weren’t on people’s radar 35 years ago.

On the other hand, many brands that have been around for decades are still with us.  Names that come to mind are Macy’s, Junior’s restaurant, Pepsi-Cola and Consolidated Edison (Con Ed)  and Jell-O gelatin.
However, there is a plethora of names that are only in our memory,  Names such as Ballantine & Rheingold beers, Pan Am & TWA Airlines, E.J. Korvette’s and   F.W. Woolworth’s , just to name a few.  And here’s another brand that senior citizens or near senior citizens, like me, who lived in NYC should remember: Buster Brown shoe stores.
I was able to compile a few reminders of brands that have disappeared decades ago AND some recently departed name brands to share with FNY Fans.
A few years back I had completed a journey on Amtrak from Newport News, VA, when I noticed this manhole cover on the platform, which track I cant remember,  while heading for the escalator to go upstairs.  Immediately I knew PRRCo was an acronym  for the defunct Pennsylvania Railroad Company, the builder and former owner of America’s busiest rail station, Pennsylvania Station.
The Pennsy, as many called the Pensylvania Railroad, was at one time one of the largest corporations in America.  The railroad had enough resources to construct the old Pennsylvania Station, two tunnels under the Hudson, four under the East River, the massive trainyard in Sunnyside (which is still in use today) and they went went halfsies with the New Haven Railroad to finance the New York Connecting Railroad, which included the mighty still-in-use Hell Gate Bridge.  All this was done for about $114m, which translates to $3b in today’s dollars.
With this in mind, it baffles  me why politicians can’t get their act together  and build just TWO tunnels under the Hudson for increased train capacity into Pennsylvania Station, while the two tunnels under the Hudson were built by a private concern a hundred years ago. But don’t get me started.
The Pennsy thrived until the advent of passenger jets and the Interstate Highway System.  In a nutshell, the decline of the Pennsy and other railroads’ passenger business was inevitable as  people no longer needed railroads for travel.  By the late 1950s, the Pennsy was in dire financial straits.  To survive, it sold the air rights over Pennsylvania Station, while tearing down the grand edifice that only existed for about fifty years.  It later merged with the New York Central in 1968, who was also teetering towards  bankruptcy.  The marriage between the once mighty railroads resulted in the resulting railroad being called Penn Central Transportation Company, which was shortened to Penn Central. The short-lived company lasted to around 1976. 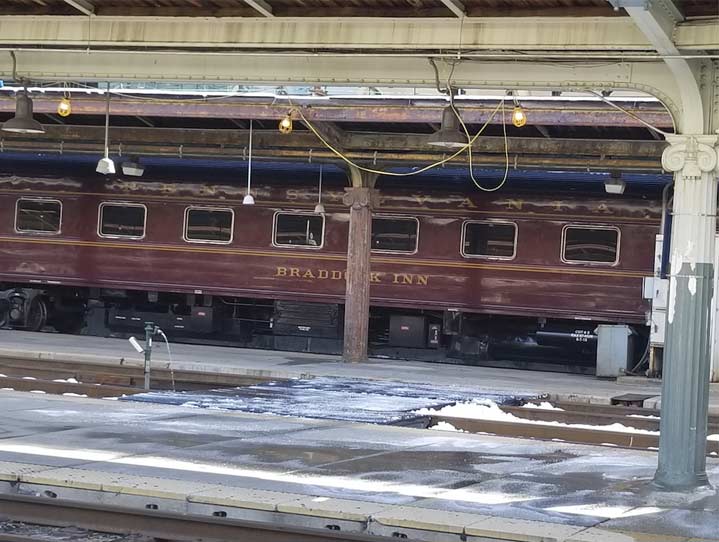 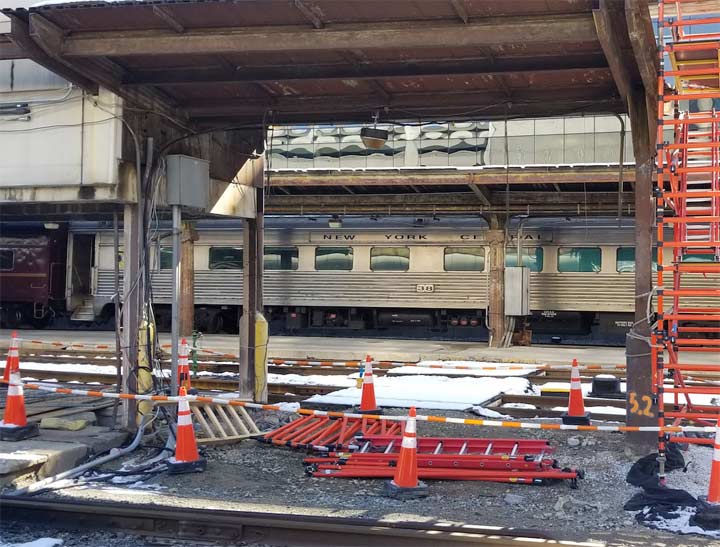 These two  railroad cars, representing the Pennsy and the New York Central, are indeed rare sight. The Tuscan red Pennsy car was the color of its extra fare NYC-Chicago Broadway Limited in its prime. The NY Central went mostly with a stainless steel look.  These two cars were sitting on a siding at Washington, DC’s Union Station — off limits for the proletariat like  me. By the way, Union Station almost suffered a similar fate as did NYC’s former Pennsylvania Station.  But logical thinking prevailed. 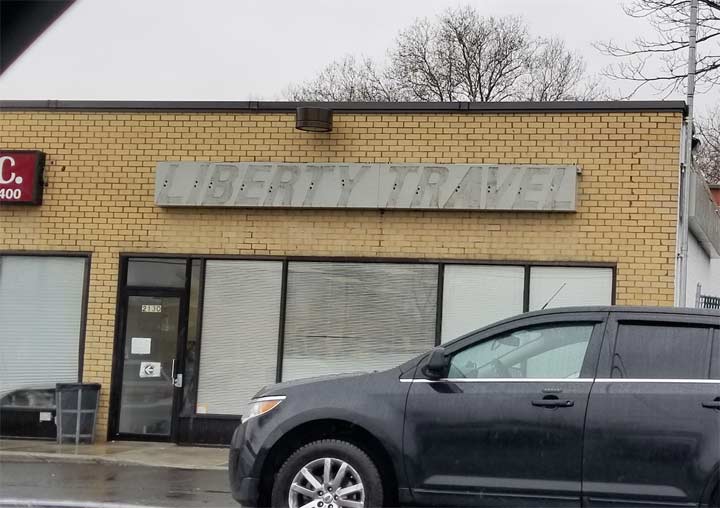 There may be some branches Liberty Travel around still, but I know many have closed like this one on Ralph Avenue, between Avenue K and Avenue L.  I believe the main reason why many have closed can be summed up in one technology — the computer.  No longer  do you have to trek to a travel agent to book a trip.  It’s the same as when I want to book a trip on Amtrak and purchase tickets, I don’t have to make a trip to Penn Station to do so. I can do everything on my computer in my home. 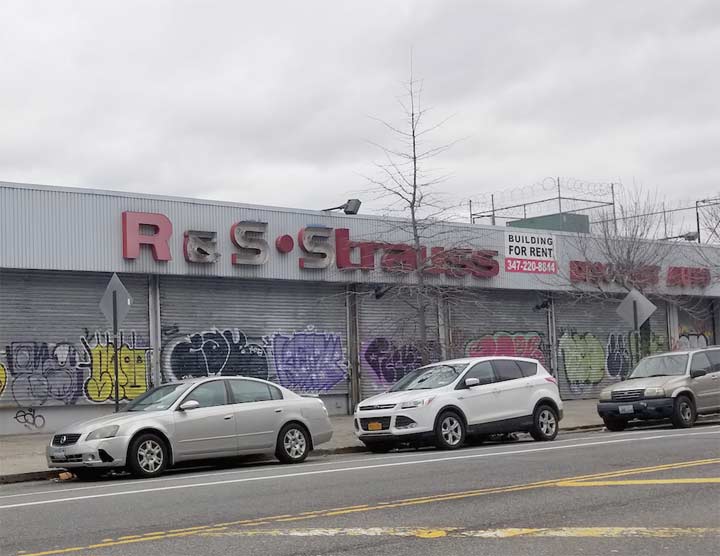 The information I have on why Strauss closed is sketchy. It seems that the chain went through several corporate owners before they threw in the towel. Maybe Auto Zone’s emergence had something to do with it.  The one pictured here was on Empire Boulevard in Crown Heights, Brooklyn.

R&S Strauss thrived in an era when everyone was a “shade tree mechanic”. Go to Strauss, buy that battery or headlight or taillight lens, etc. & DIY. Decades later it’s nearly impossible even to replace a flasher unit. Today the equivalent is going to Auto Zone, telling the counter clerk that you need a battery. He searches the data base, identifies the part & then you the clerk walk it out to the parking lot. Ten minutes later, he has cheerfully replaced it , & you’re on your way, but first, you must restore your audio volume, station presets, & one touch up/down switch. Not a big deal, but a bigger deal than it was when Strauss ruled.

Some stores (Advance in my part of the world) have a device that will plug in to the OBDII port to keep the computer’s memory powered while they replace the main battery. Saves some hassle.

But with today’s vehicles there are only a limited number of things the DIY shade tree guy can do. Almost everything requires a special tool. Even replacing a ‘fan belt’ on a newer car can take hours between the routing of the belt and the need to service the tensioners. Even replacing the spark plugs can require a special tool, and may involve partial disassembly if something breaks. (Think of the Ford Triton V8.)

One thing that has helped DIY’ers is You Tube. Chances are you can find an instructional video for the work you’d like to try.

I’ve got a better story: In 1994 I bought a new Dodge Shadow for my wife because it was derived from the K-car platform & therefore would be low maintenance/low cost. For the most part it was but eventually it needed a flasher for the directional signals. I went to a hole in the wall store in Bayside where I bought a Tung Sol unit. That’s when I had the rude awakening: I looked on both sides of the steering column & found nothing so I looked inside the glove box: same outcome. I went to a Gulf station on Union Turnpike where I knew the owner. He looked & couldn’t figure it out. He called two young helpers, who opened a book & located it. It was behind the center stack, which they dismantled & finally the job was done. We all had a laugh. It was obvious that the strategy was to make small profit on the sale of the car & then generate real profits on maintenance & repairs. And that was around 1999!

The Penn Central really only made it for two years (1968-70) before collapsing in a bankruptcy that was that largest US business failure up to that time. It really shocked many people, being somewhat the equivalent of GM and Ford merging into one company and then collapsing two years later. The Penn Central limped through bankruptcy proceedings until 1976, when Amtrak/Conrail picked over the bones of what was once two mighty railroads. The Penn Central collapse in 1970 forced President Nixon to create Amtrak in 1971 so long-distance and some commuter trains could keep running, at least until the various states and transit authorities could take over local commuter lines (NJ Transit, Metro-North, SEPTA, etc).

I can remember Dunkin’ Donuts from 35 years ago in NYC. AT the time, they were separate from Baskin Robbins locations.

On a recent trip back to NY, some other brands/stores I noticed were gone:

Waldbaums and Pathmark were both divisions of A&P and all of them went down in spectacular fashion a couple of years ago. The company was beset with three issues: lazy, overpaid unionized employees; comically inept management; and a crushing corporate debt burden. It probably could have survived with one of these issues, maybe with two, but all three together was a guaranteed death sentence.

Channel and Pergament could not survive the influx of Major Home Improvement Retailers … one of which I work for. Robert Hall has been gone for many years, I don’t know about TSS.

Strauss stores was established by Izzy Strauss, the brother of Moe Strauss, of Pep Boys, Manny, Moe and Jack fame. I vaguely remember that they Strauss used some of the same cartoon store graphics that Pep Boys did.

How about a tunnel between Staten Island and Manhattan & Brooklyn already. Cmon!

Keep in mind that when these businesses were originally placed, they were before the internet was available to the public.

The dogs name in the Buster Brown ads was Tighe…

What, no mention of Korvettes? Or S. Klein? And am I the only who remembers Modell’s as a department store before to its current incarnation as a sporting goods store?