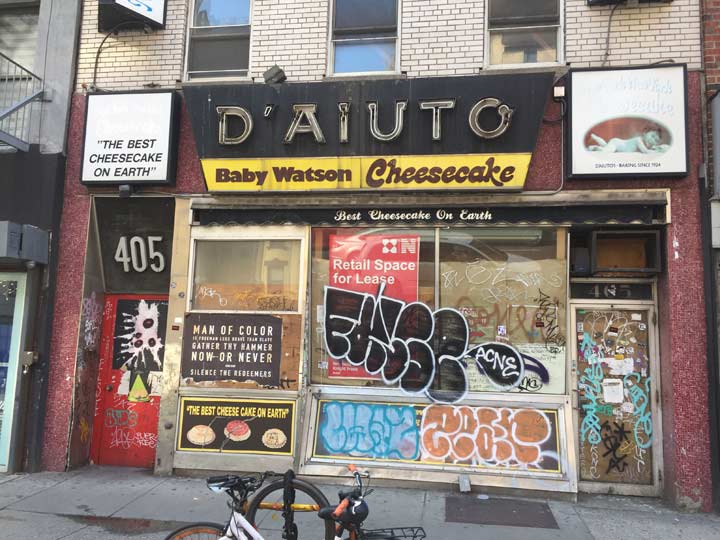 Small wrapped “Baby Watson” cheesecakes were a staple at NYC grocery checkout counters until 2013, when the company that produced them, D’Aiuto, bit the dust, and along with it, their storefront and its neon sign at 408 8th Avenue, in the shadow of Penn Station and its developing twin, the Moynihan Train Hall.

According to Lost City (which is also apparently on permanent hiatus) the D’Aiuto bakery was founded by Italian immigrants Luca and Anna D’Aiuto in 1924 and had always been in the Chelsea area, first on West 25th and finally here on 8th Avenue. Cheesecake scion Mario D’Aiuto developed the signature “Baby Watson” brand, placing a photo of himself as a baby on the wrapper, and naming it “Baby Watson” in an era when an overly-ethnic identity might scare off consumers.

At one point there were four D’Aiuto stores in addition to the flagship and the company had expanded to the Boston area, but then the Baby Watson brand name was sold off, sales declined and gradually, the stores closed down and shipments of the small lunch-size Baby Watson cheesecakes ceased. Like most businesses, D’Aiuto hit is peak and declined. Mario became ill and his wife ran the business for awhile but then sold the building and the business to an Ajay Patel, who said he would continue running the business, and apparently did so for a time, but couldn’t make a go of it.

As of 2018, the building is apparently hostage to the multimillion dollar price that no doubt is being asked for it.

sadly this is such an eyesore on 8th Avenue- I miss the ices they had every spring.

I used to go there a number of times to get a slice of cheesecake either before or after a Knicks or Liberty game over at MSG until they recently closed down.

Remember it well. From 2007-2012, I worked around the corner and stopped there for coffee every morning, and for an occasional cheesecake to bring home. Good stuff.

I fondly remember the Chipwich type ice cream sandwich with Cheesecake ice cream, they were the only place that made it

The BEST cheesecake on the planet! Nothing will ever compare if you ask me. Breaks my heart to this day that I can’t get it anymore. I wish I could find the recipe!

You can still get the cheesecake from the Deli 3 doors down. It’s delivered every week.

Mario DID NOT DEVELOP Baby Watson! Baby Watson was a creation of my roommate in Boston, the late Kenny Deutsch, who found the baby picture in a New Hampshire antique barn and developed a mythology around it, calling it Baby Watson. Along with his business partner Peter Metrick they went to NYC to find a good cheesecake they could re-brand and develop into a regional and then national brand, which they did. They had commercial outlets, beginning with one in the Faneuiel Hall Marketplace in Boston, I know because I produced all of the Baby Watson radio commercials too.

I am Holly of Hollys Boombooms. I worked in the Cambridge bakery for 2 years. Even went to Jamaica with them. I have been
looking for Kenny and Peter for years. I would really like to know what paths their lives took. The last I heard Kenny was racing
cars!

I used to buy Baby Watson cheesecake from the frozen section of the supermarket in the 70’s and 80’s. It was a small cheesecake, but the taste was good. Don’t recall seeing it after then, but I changed supermarkets.

Just walked through the old neighborhood. Sad to see it go. I remember it well living a few blocks away on 25th

For a very short time they had a store in a small shop on Opera Place near Northeastern University in Boston. Didn’t last long but it was s special streat back in 1984 or 85