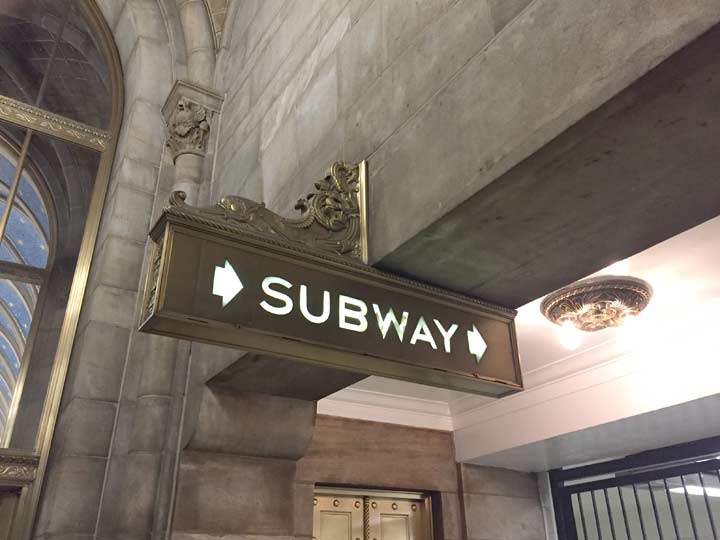 I discovered this illuminated subway sign quite serendipitously when wandering around the Grand Central Terminal area prior to checking into a midnight temp job at a financial publisher. It’s just inside the cavernous entrance to Cipriani on East 42nd just east of Park Avenue and consists of gilded wrought metal. The MTA has vouchsafed its preservation, and could just as well removed it and installed a standard sign, so I’m glad they decided to make an exception to the rule here. Also check out that gorgeous lamp sconce next to it.

The 1921 Italian Romanesque Revival Bowery Bank Building was converted years ago to the Cipriani restaurant and grand event space. The interior is  65 feet high, 80 feet wide and 197.5 feet long and is built from marble, limestone, sandstone and bronze. Both the original Bowery bank building downtown at 130 Bowery and here are considered two of the great event spaces in NYC. Years ago, I took a look, but was shooed out by a guard, a natural response to a lone figure scuttling about with a camera!

The IRT subway has served Grand Central Terminal with 4, 5, 6 and 7 train service since the late 1910s. There’s another grand private subway entrance further south on Park Avenue–and it’s almost too good to be believed.