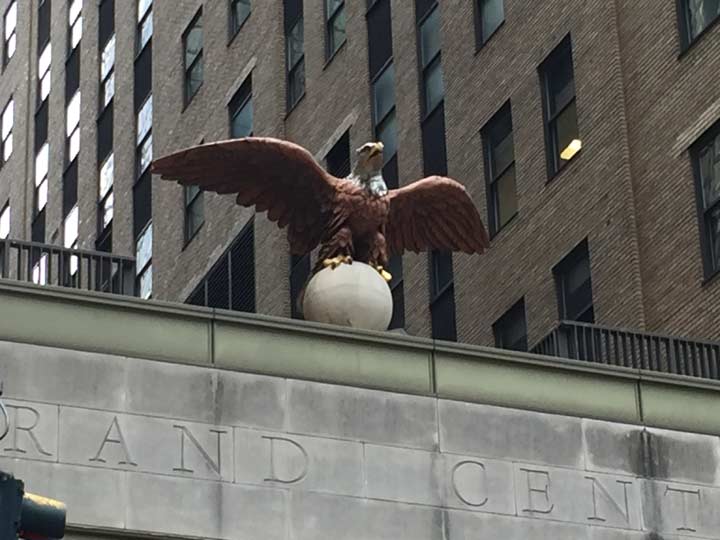 Two enormous iron eagles can be found outside Grand Central Terminal, one on the Park Avenue Viaduct as it curves past Vanderbilt Avenue and East 42nd Street, and this one, perched above a GCT entrance at Lexington Avenue and East 43rd. I was surprised to learn that these eagles are not part of the 1913 Grand Central that exists today. Instead, they were added when the original GCT, constructed in 1873, was renovated from top to bottom in 1898. The two eagles, along with 8 or 9 of others (it’s unclear how many), were in their original places until the original building was torn down and replaced with the present GCT. The 13-foot wingspan, 2-ton eagles were scattered around to several different owners until two found their way back to GCT. They were located on properties in Bronxville and Garrison, NY and donated to the MTA, which put them in their current positions.

Two can be found at the Vanderbilt Museum on Long Island; one is on a private estate in King’s Point, Nassau County; another at the Space Farms Zoo in Sussex, NJ; another at Philipse Manor in Sleepy Hollow (formerly North Tarrytown); another in upstate Phoenicia, NY; and two at St. Basil Academy in Garrison.