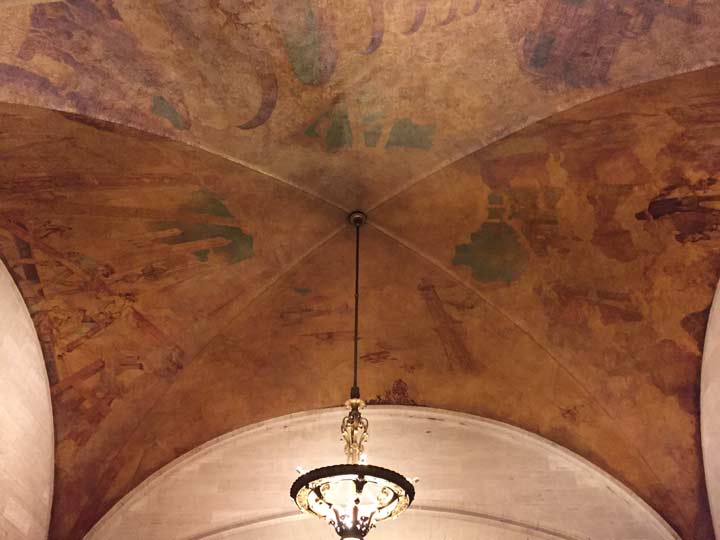 For several weeks in April and May, I worked overnights in the Grand Central Terminal area. There are a variety of ways to get from the subway into the Terminal to the streets outside, and I often chose the Graybar Passage, which is a corridor from the Great Hall through the Graybar Building to Lexington Avenue. I have recently written about the Graybar Rats, which are on a Lexington sidewalk canopy, but there are other quirks as well, such as this ceiling mural by Edward Trumbull, whose work also graces the lobby of the Chrysler Building across the street.

Trumbull’s Graybar mural predates his work in the Chrysler by four years, 1926 vs. 1930. The theme here, as you might expect, was modern travel. Unfortunately time has not been kind to the mural; the ones across the street were restored in 1999.

It’s the only remaining ceiling mural in the Passage. Other vaults featured paintings of blue skies and clouds, but were painted over quite awhile ago. Here, the mural shows scenes like an electric train, a bridge resembling High Bridge, skyscrapers and steel manufacturing, airplanes (including Lucky Lindy’s Spirit of St. Louis) and zeppelins, once thought of as a prime competitor to the airplane for air travel until the Hindenburg disaster.

Either the Graybar ownership group or the MTA should part with a few ducats and restore this Trumbull mural — his works in the Chrysler and Rockefeller Center have enjoyed such treatment.

In the early 1970s, worked at Jack LaLane Health Spa in the basement of the Biltmore Hotel. I used to enter the hotel through a passage off of Grand Central.

I’ve seen this countless times over the decades, and you’re right–they’re definitely fading away.
.
The vaulted ceilings there make for great echoes. Unfortunately, they placed retail kiosks at the exact centers of each echo chamber, rendering them useless. I used to be able to stamp my feet, hear the sound echoing back to me.