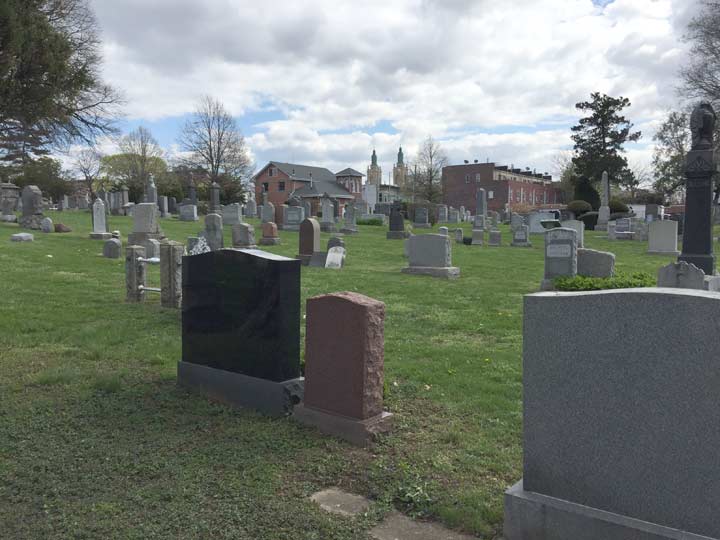 Until the 1910s and ’20s Ridgewood was suburban and nearly rural in some spots, with farms and sprawling country homes, but developers Paul Stier and Gustave X. Mathews made marks that survive to this day by constructing acre upon acre of handsome row houses along its streets; Mathews’ blocks, many of which are now landmarked, feature yellow bricks from the Balthazar Kreischer kilns in Staten Island.

There are actually two Linden Hill Cemeteries between Woodward, Grandview and Metropolitan Avenues and Starr and Stanhope Streets: Linden Hill Methodist, accessible from Woodward Avenue and Hart Street, and Linden Hill Jewish (Lahawith, or Ahawath, Chesed), on Metropolitan Avenue east of Starr Street. The Jewish cemetery is the final resting place of longtime NYS Senator Jacob Javits (1904-1986), while a notable permanent occupant of the Methodist cemetery is playwright and Broadway producer David Belasco (1853-1931).

This small area of Ridgewood was originally called Linden Hill, and there is a Linden Street nearby. This photo was taken in Linden Hill Methodist. The Roman Catholic St. Aloysius Church is visible in the distance.

Cemeteries often have interesting stories. One of the most intriguing ones took place shortly before Christmas 1996 at Pleasant Valley Memorial Park in the Washington suburb of Annandale, Virginia. A middle aged woman wearing expensive clothing sat on the ground near a section used for infants’ graves, though not near any particular grave. She placed a miniature Christmas tree on the ground, put a comedy tape in her Walkman, drank a large amount of brandy, took some Valium, and then put her head in a plastic bag and died of suffocation.
Although the woman clearly wasn’t a skell, she had no identification and remains unidentified to this day. She did not match the description of any known missing person (while there are tens of thousands of missing persons at any given time, very few of them are middle aged white women).

Thanks for this. Do you have any idea why there are so many cemeteries in this part of Queens, especially along Metropolitan? More generally, have you ever read a good history of cemeteries in NYC, one that talks about *why* they are where they are?

In the mid-19th century, Manhattan was already becoming too crowded for additional cemeteries. A cemetery belt was developed on the Queens-Brooklyn border, taking advantage of then-rural areas with much vacant land. The rocky, rolling hills were not good for farming but were very adaptable for cemeteries. More details are in this The New York Times article from April 27, 2017: https://www.nytimes.com/2017/04/27/nyregion/why-the-brooklyn-queens-border-is-full-of-dead-people.html

Additionally, beginning in the 1880s, Brooklyn began expanding outward as new trolley and elevated routes were extended to the neighborhoods near the Queens border, such as Bushwick, Ridgewood, and Cypress Hills. The new cemeteries were thus accessible to families traveling from Manhattan and the inner portions of Brooklyn. Today’s J and M subway routes are the best examples of such 19th century routes still in use. Metropolitan Avenue, the M’s terminus, is near All Faiths (formerly Lutheran) Cemetery. The J line between Broadway Junction and Elderts Lane stations is near a whole collection of Roman Catholic, Jewish, and non-sectarian cemeteries.

Queens had open land for cemeteries and was relatively nearby to Manhattan and Brooklyn. . My grandfather and his brother in law owned a livery stable on Willet St on the Lower East Side in the early decades of the twentieth century and rented horse driven hearses and carriages to the funeral trade. That area of Willet St. is now a housing development.

Transportation was a major factor. New York & Queens County Transit had a streetcar route known as the “Cemetery Line” which accessed most cemeteries in Western Queens. Today’s Q67 bus pretty much follows the same path starting on Metropolitan Avenue. Look it up on the MTA Bus Map.

There is a geological reason why there are so many cemeteries and parks along Metropolitan Ave. . The New York Times described the geological features here in an article this past week. In it, geologisits call the East/West ridgeline running along the spine of Brooklyn and Queens as a ‘Terminal Moraine’. This means it was the end of the ice sheet that covered North America millenia ago. The many rocks and boulders are the debris that was both pushed along by this moving ice sheet and those that were washed down when the melting ice sheet retreated.

As noted in a previous email thread, the land was therefore not suitable for farming.

About 55 years ago there was a small Jewish cemetery on Troutman Street, I believe just off of Woodward Ave. It was no larger than two city house lots. It no longer exists, and when my friends and I “discovered” it it seemed to be abandoned. If my memory is correct about the location there is now a newer building on the site, next to older buildings. Does anyone have knowledge of this?

The cemetery was on the west side of Starr St. between Woodward Ave. and Metropolitan Ave.It shows on the E.Belcher Hyde atlas of Queens,N.Y. from 1908.My sister and myself remember it very well.There was about a dozen headstones ( most knocked over) that were the same type found in Trinity Church yard in lower Manhattan They were very weather worn and what writing was visible, appeared to be Dutch. After a lot of research,I think this was the Woodard ( later misspelled Woodward ) family cemetery.This was their farm at one time and their farmhouse and barn was located on the northwest corner of Woodward Ave. and Flushing Ave.The cemetery was surrounded on three sides by a factory (which now covers the cemetery ) and the front had a black wrought iron gate with a entrance door. I grew up on Stanhope St. and lived there from 1950 to 1992. I knew the area like the back of my hand. Hope this info helps

Robert this is fascinating. I walk by there all the time, and had no idea there used to be another cemetery across the street as well. Thanks for sharing.

Steve, you are right .If you type in VINTAGE AERIEL SURVEY VIEWS OF QUEENS, N.Y. on page #1 go to HISTORICAL AERIELS VIEVER ( YAHOO ) the Cemetery shows up in 1955 & 1966 but is covered over by another factory in 1980. You could access the cemetery from Troutman St. and Starr St. in the 1955 & 1966 photos. The orignal Cemetery plot was a rectangle shape as shown in the 1908 atlas map. Thought you might be interested.

Do you know specifically where in the cemetery Jacob Javits is buried?

Do you know where exactly in the cemetery Jacob Javits is buried?

Jacob Javits is in Linden Hill Jewish Cemetery. It is accessible via Metropolitan Ave,

Lived on Onderdonk near Flushing in 50 s Robert Illining s post is great thank you I knew and have
Visited Onderdonk house but didn’t know of Woodard history or house. Kathy Kelly Lynch

If you look at the factory across the street from the Starr St. entrance to Linden Hill Cemetery, you can see the two vertical lines in the bricks of the factory wall . They are about forty to fifty feet apart . This is where they covered over the cemetery with a new section of the factory. The newer bricks match the older bricks from the older section of the factory very well so it might be a little difficult to see the two lines. I always wondered if they removed any remains. There is a book on the Bushwick section that shows some pictures of the Dutch Farmhouses in the vicinity of Flushing Ave and Onderdonk Ave. It still may be available Check this web site BROOKLYNPIX.COM .You will love it if you like old neighborhood pictures.

Davis Belasco is actually in the JEWISH cemetery, not the Methodist one. I used to enjoy looking at the Tiffany stained glass window in the mausoleum before it was stolen.