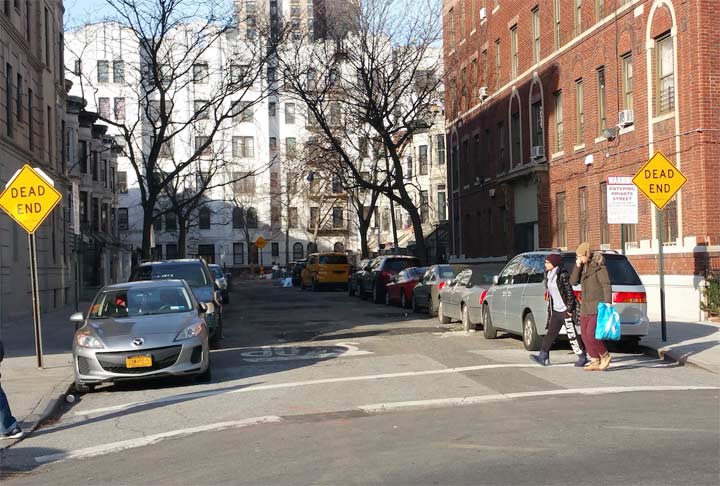 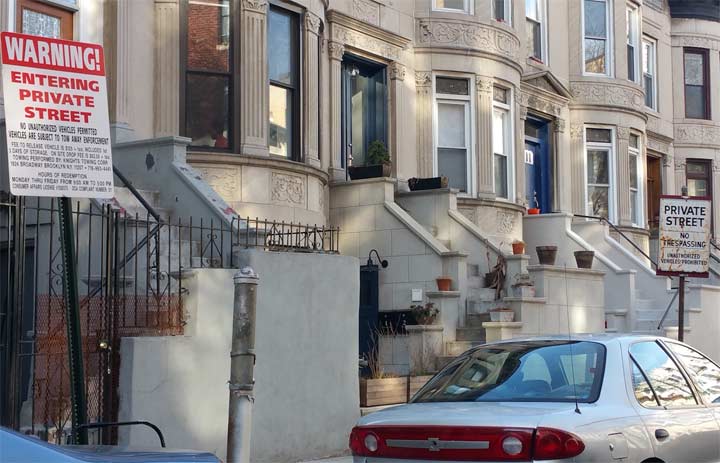 I don’t know about you, but when I see the term “Private Street,” I think of Riverdale, the Bronx.  I always thought that Riverdale has the most private streets, but actually the crown goes to Staten Island.  Staten Island has 600 private streets.   Imagine my surprise when I saw Parkside Place, a short dead-end street on the north side of Parkside Avenue, between Flatbush and Ocean Avenues.  I didn’t expect it in such a densely populated area.   It’s a few steps from the Parkside Avenue (BMT) subway station.

But the cynical side of me wondered whether it’s an official private street, or did someone put those signs up to discourage non residents from parking on this street.  Is there any FNY fan who can explain to us novices as to how a street can be a private one?  Count me as one who wants to know. –Gary Fonville

I think to be official, the residents have to buy the road bed and pay the cost of maintenance of the sidewalks, curbing and pavement.

When i was a kid this street was rather sketchy to say the least. After looking at a few news articles I understand why.

Private streets are responsible for their own maintenance… road repairs, sewers, etc.

Many of these streets have trouble with funding their upkeep.

As to parking on Parkside Place? I never tried. Not sure how restrictions could be enforced other than residents having your car towed to private lot and then having to “bail out” your vehicle.

Here is a link to an article on the state of private streets in NYC.

I used to play on that block in the late ’50s and early ’60s. My cousins along with my grandmother lived there. At the time it was called Parkside Court and was not a private street.

The plaintiff says it sure looks like NYC Dead End signs, an NYC Stop sign, and NYC painting on the blacktop. The defense points to the terrible condition of the pavement beyond that point. The jury cannot decide.

Parkside Place is shown but not listed on Google Maps, so it may very well be private. On Staten Island, many of the “private” streets are just long driveways that wind through private housing developments. Developers try to discourage casual pedestrians, and usually have their own sanitation pickups and snow plows. They are almost always marked “private” and have street signs that are somewhat different in size and typeface from standard NYC signage. Think of them as streets running through gated communities, though many of them don’t have a gate as such.