Pembroke Avenue runs for two blocks in Little Neck in Queens, from Little Neck Parkway east to Glenwood Street just south of Northern Boulevard, whereupon it plunges further east into University Gardens in Great Neck, one of a plethora of political divisions in the first town east of the Queens-Nassau border that I have yet to study fully, because they’re quite complicated.

Why mention Pembroke Avenue? Once it gets into Nassau County, Pembroke Avenue and its surrounding streets behave unusually, specifically regarding its house numbers and addresses. 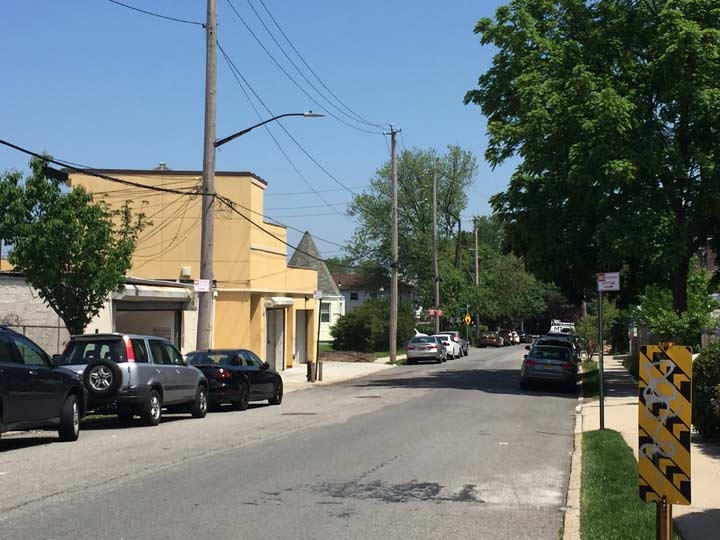 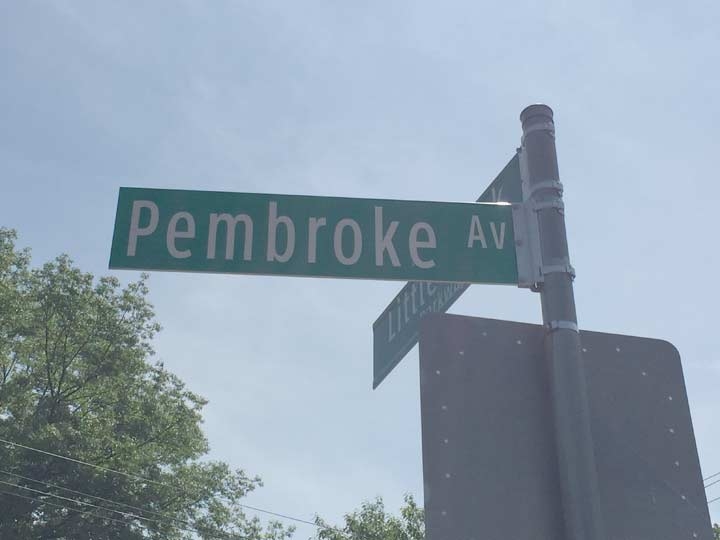 Pembroke Avenue begins as just another eastbound street in Little Neck. In this neighborhood, numbered streets are actually in the minority as most of the streets have kept their old names. However, an important thing to keep in mind, as we’ll see, is that the Queens house numbering system is in place here. Since Little Neck Parkway stands in for 253rd Street here, the first address on Pembroke Avenue is 253-17… 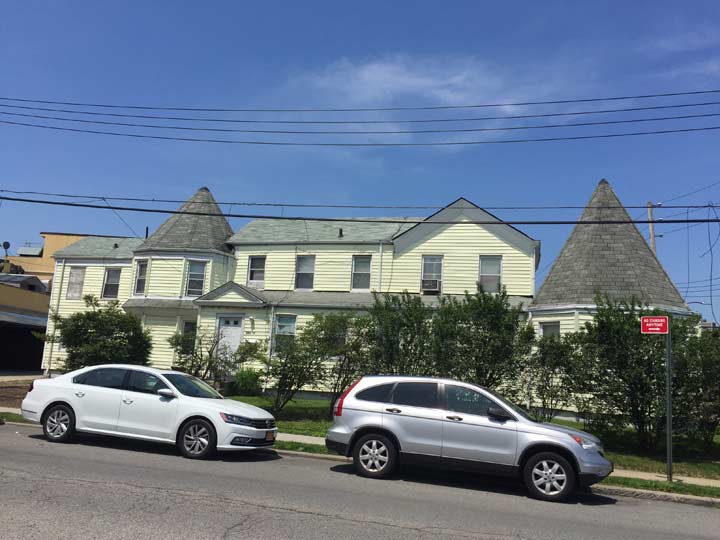 …which is a somewhat historic address, as it turns out.

The William Van Nostrand House at Pembroke Avenue and 254th Street was built in the mid-1800s; before it was in the Van Nostrand family it had been owned by Capt. Valentine Peters, who ran a general store from part of the property. When Peters owned it the house was called “Old Oaks” as it was surrounded by large oak trees. Until 1929 the house stood on Northern Boulevard where the Little Neck Theater is today, and was moved here to accommodate the new building. The theater remained open until the 1980s, when its air conditioning system failed. Today the old theater building is home to the La Grotta restaurant and other businesses. 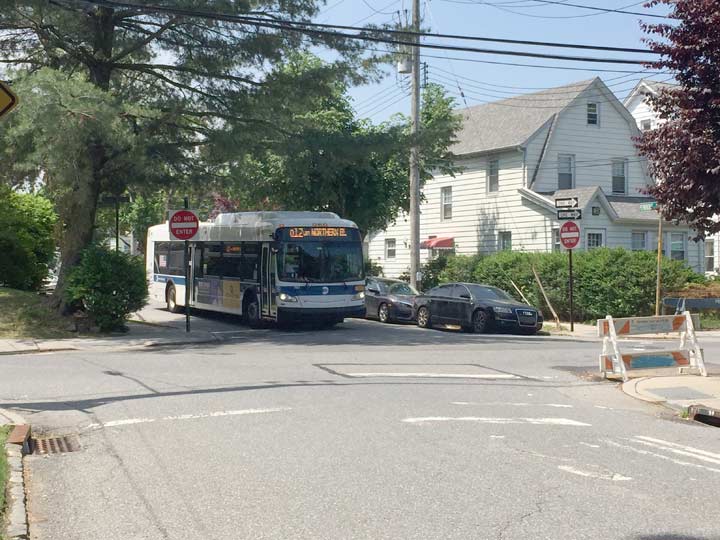 The Q12 bus uses Pembroke Avenue and Glenwood Street to turn back onto Northern Boulevard for its route back to Flushing. I am standing in Nassau County for the shot — the bus, operated by New York City’s Metropolitan Transit Authority, does not enter Nassau County. 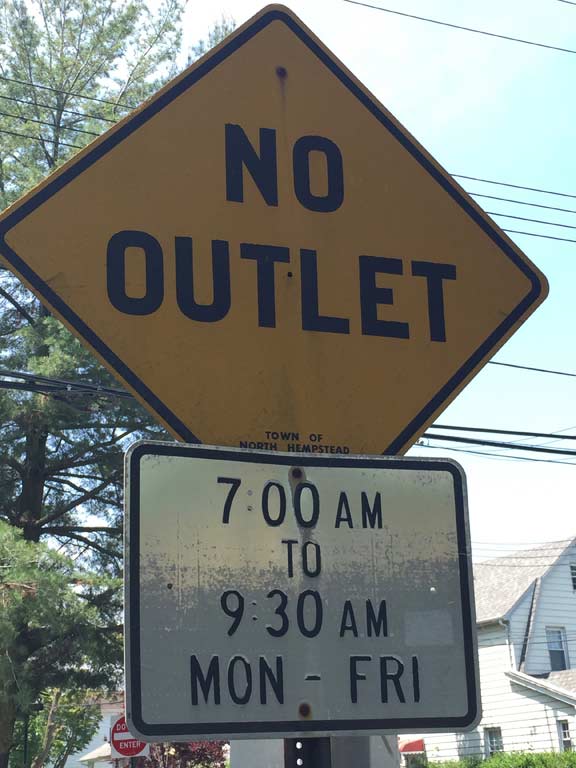 I’m occasionally charmed by Nassau County traffic signs because they were formerly hand-lettered, and some of those signs still survive. 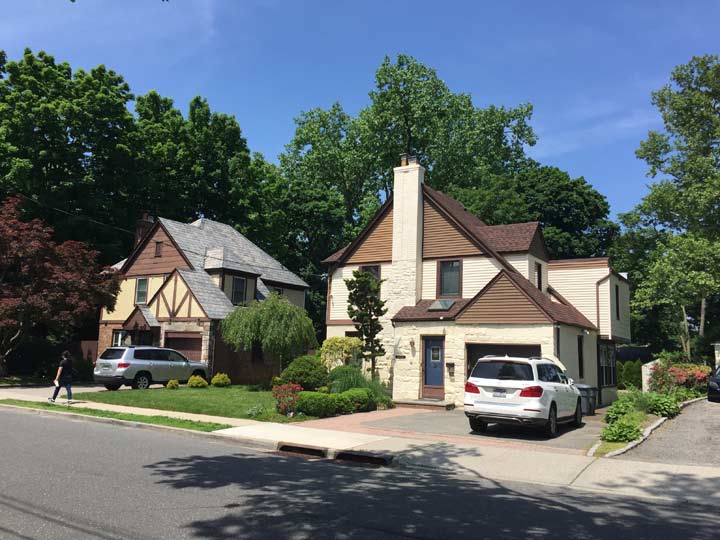 Great Neck is peppered with handsome Tudor buildings like these. The one on the left has retained more of its original characteristics. 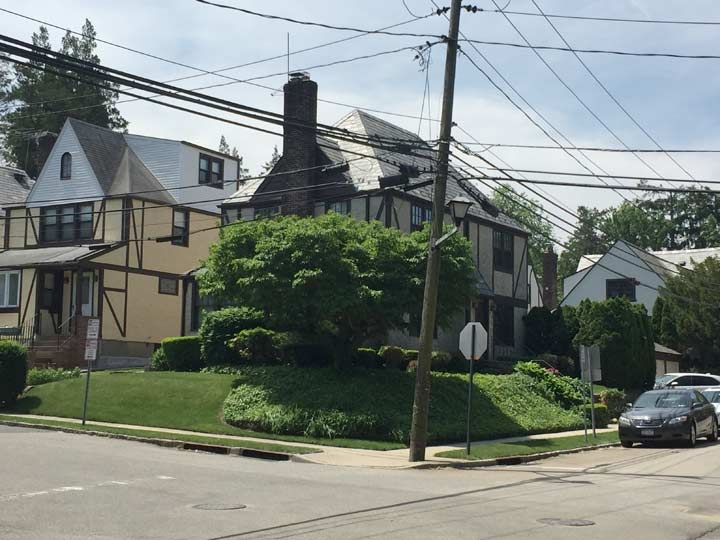 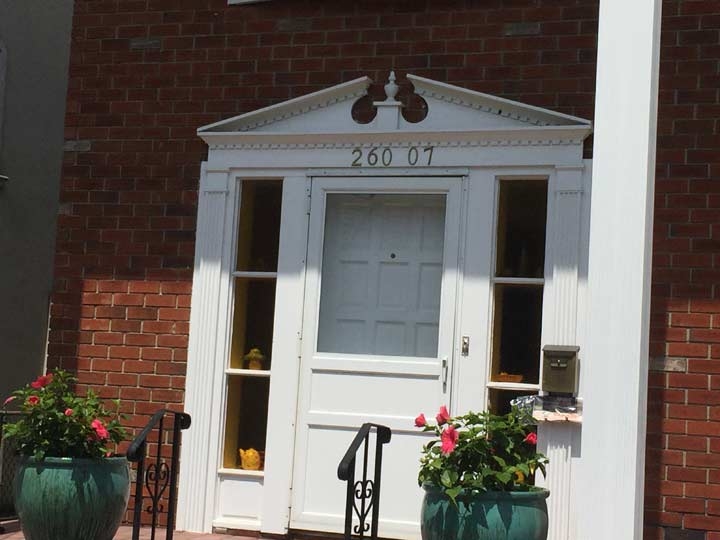 And now, for Pembroke Avenue’s unusual characteristic. When Queens streets enter Nassau County, they leave their Queens numbering system behind, and begin at the beginning. For example, the border between Little Neck and Great Neck here is along Glenwood Street, so the first address on Northern Boulevard is #1. The same holds true for most streets in the area. But Pembroke, and a pocket of streets around it, keep their Queens numbering in Nassau County. 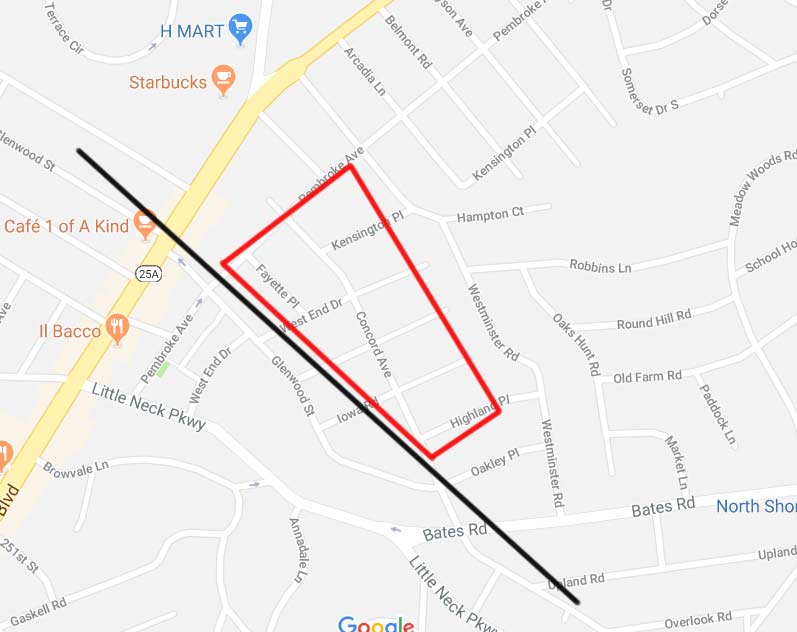 Google Maps isn’t very good at showing city and municipality divisions, so, I’ve drawn a handy black line where the Queens-Nassau border is. You can see that a number of streets, including Pembroke Avenue and a number of shorter streets cross the great divide. I have circled the area where Queens house numbering is the rule, which includes some north-south streets as well. Concord Avenue enters Queens, but once it does, it becomes Concord Street.

As far as I know, this situation is unique, though I will have to see if streets south of here that are in both Queens and Nassau share Queens street numbering. I have already depicted them in FNY’s Queens-Nassau border series, but didn’t pay attention to house numbering — I should have.

No need to do the research. The same situation exists where Floral Park, Queens turns into Floral Park, Nassau County. Not only do the NYC street names change from numbers, such as 266 Street, to names such as Emerson Avenue but the house numbers reset on the Nassau side as well.

It would interesting to learn if these streets were mapped before 1899. The exising situation may exist due to confusion as to the location of the Queens- Nassau line.

I can answer your question about why Pembroke Avenue and a few of its adjoining streets keep their Queens numbering in Nassau County. I lived in Great Neck for about twenty years in my younger days and continued to be a regular visitor to the area until a few years ago.

There are seven short N-S streets between Northern Boulevard and Pembroke Avenue, beginning with Buttonwood Road and continuing east to Arcadia Lane. Until the mid-1960s each of these was numbered, beginning with 256th Street (Buttonwood) proceeding east to 262nd Street (Arcadia), an obvious continuation of Queens street nomenclature for a few blocks.

The Town of North Hempstead, which is the local government body for this portion of Great Neck, decided to eliminate the numbered streets in the mid-1960s and adapt the names used today. All were new except for Jayson Avenue (260th), which was already the street name north of Northern Boulevard. The Queens-style house numbers were not changed and persist to this day, encompassing a few more blocks than shown on the map. Jayson Avenue terminates at the Lakeville Elementary School, 47-27 Jayson Avenue, but was originally 47-27 260th Street.

The streets intersecting with Pembroke in Nassau County were once numbered from 256 to 261. (See 1939 Hagstrom).

What is interesting is that the Nassau County tax maps last updated in 2003 still show the blocks with their numbers not their names, not even in parenthesis. As far as the tax man goes you live on 256 not Buttonwood. https://lrv.nassaucountyny.gov/

Having grown up in both Nassau and Queens I do know that, psychologically, many house owners did not like numbered streets because they associated them with the great unwashed just over the Queens line from where they came.

Lastly I noticed the the lot surveyor listed in the deeds for some of the older properties (ca. 1905) on the NYC side was Charles U Powell who I assume was the same man who developed the Queens street numbering system for the Topographical Bureau.

can you point me to a 1939 Hagstrom, would love to see it

It will lead to a Hagstrom map of the area from 1946, Clearly shows the numbered streets I mentioned in my earlier post. The map can be enlarged enough to read the print.

Use the link below to a 1946 Hagstrom map that clearly shows the old numbered streets south of Northern Boulevard, beginning with 256 and ending with 262. Map can be enlarged so that print is legible.

Here. You can see how the subdivisions reflected the borders of the farms/estates.

Very mean of developers to build homes straddling the borderline, causing confusion and double taxation on the homeowners. This is why most borderlines in the world rely on rivers, roads or spaces where development is not allowed.

The taxation is split according to what piece of your property is in each jurisdiction. Garbage pickup depends on who can access your property. If both can then put it on one side the City picks it up, the other, a Nassau township picks it up.

Schools are often a choice. In some cases you can pay much lower city property taxes and still send your kids to to wealthier Nassau schools. Even within Nassau, school busses pick up kids who live walking distance from a school to take them to a school that serves their “borders” much further away.

You are right in that borders mean something. The confusing array of municipal services in Nassau County for, say, just one house leads people to believe that they have no power over their own government nor over real estate people and commercial interests in general. Without a well-defined place they tend to generate a me-first fortress mentality just to maintain themselves.

NYC fixed this years ago by re-aligning the Brooklyn / Queens border along real streets.

Lastly Kevin covered a place where one side of the street is named Hook Creek Boulevard and across the same street is named Ocean Avenue. The choice of names was not accidental. The people on the Nassau side wanted to distance themselves from the City side as much as they could. Their reasons for doing so are varied and sometimes not very pretty.

For the same reason Bellerose residents successfully got the Queens section of Jamaica Avenue changed to Jericho Turnpike in 2005, to match the Nassau side. To this day I maintain they did not want to be associated with Jamaica, Queens.

In the 1960s we lived on Walden Place in Great Neck. The continuation of this westward into Queens County was Walden Avenue. Both used the Queens house numbering system.