CARL SCHURZ and THE WHO, Morningside Heights

West 116th Street comes to a temporary halt at a steep cliff marked by Morningside Park just east of Columbia University, and a sweeping view of upper Manhattan and beyond can be glimpsed from the top of this promontory. In 1913, the site was prepared for a monument to one of the premier immigrants the USA had taken in during the 19th Century, Carl Schurz (1829-1906). 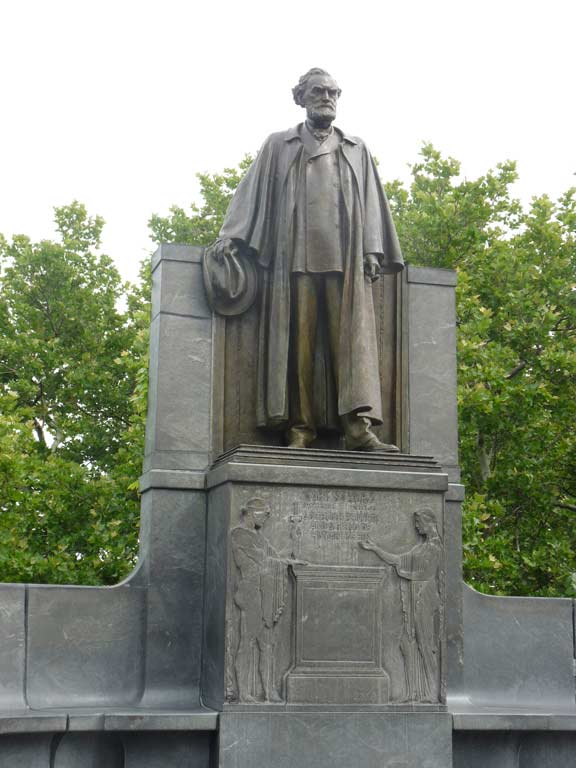 Schurz, who by 1848 was a doctoral candidate at the University of Bonn, joined strenuous opposition to the Prussian government then in power. He wound up imprisoned but escaped to France, then England, and finally the USA in 1852. Among his many accomplishments here were his rise to a Civil War generalship, US Senator from Missouri (1869-1875), Rutherford Hayes’ Secretary of the Interior (1877-81), editor of the New York Tribune and Harper’s Weekly. Upon his death in 1906, this monument was commissioned by prominent lawyer Joseph Choate, who raised $93,000 for it. 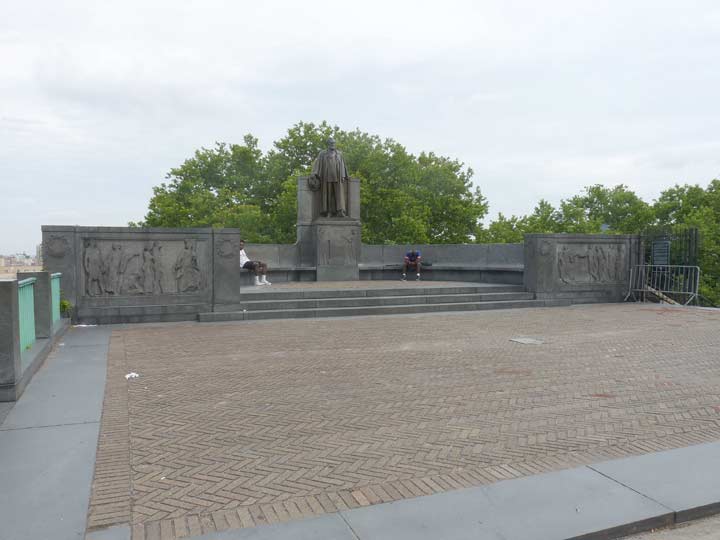 Sculptor Karl Bitter and architect Henry Bacon collaborated on the monument, which consists of a sculpture of Schurz, three allegorical reliefs, a pair of granite exedra (benches) and a brick plaza. Bitter’s other best-known work is the goddess Pomona in the Grand Army Plaza fountain, while Bacon designed the Lincoln Memorial and NYC’s ubiquitous Type B park lamps. 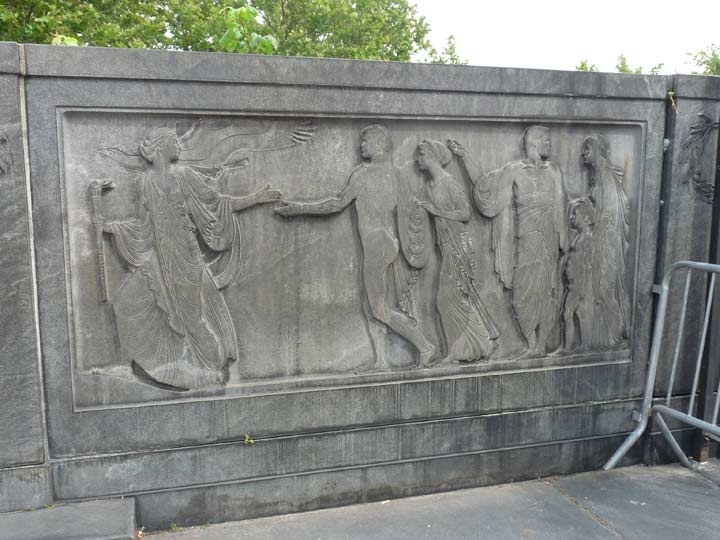 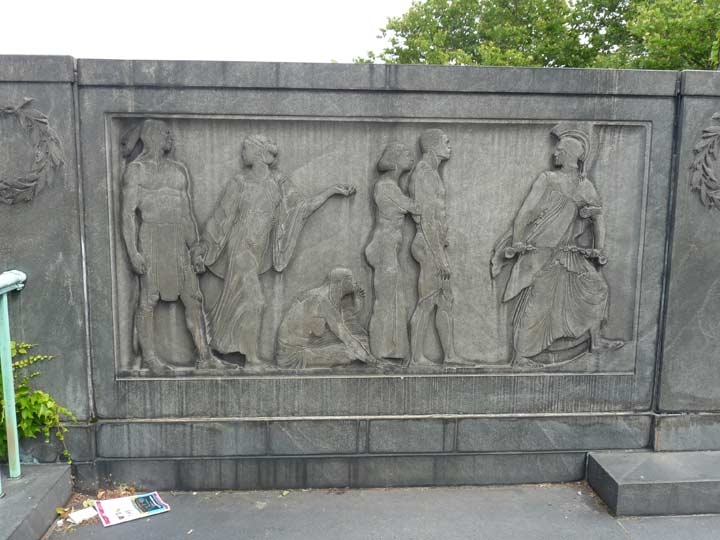 The bas-reliefs are wild, mashups of Indian chiefs, Roman centurions, African natives, and robed citizens, apparently alluding to Schurz’s writings and concerns on world peoples. The Piccirilli Studios in the Bronx, the same firm that produced the US Capitol dome, executed the reliefs. 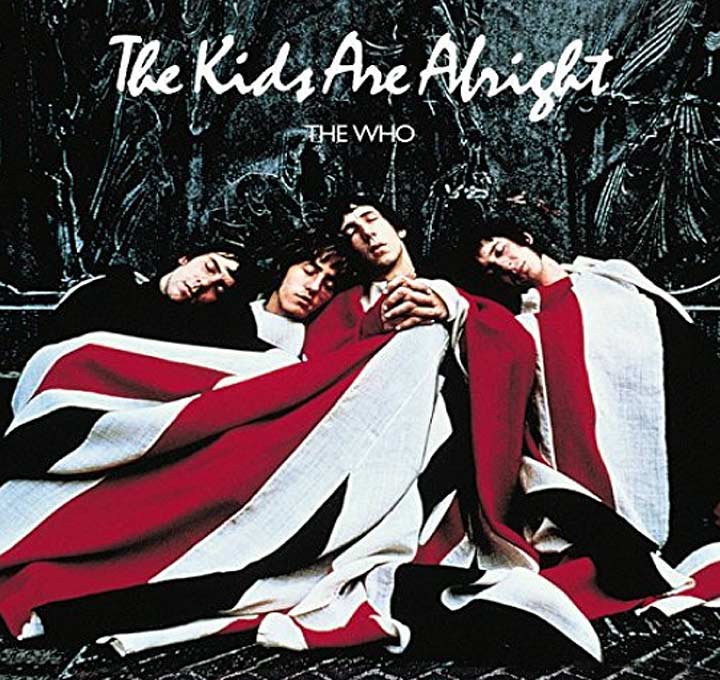 What do the beloved British rock group The Who have to do with Schurz? Nothing at all, but they did come to the monument in 1968 for a shoot with renowned photographer Art Kane, best known previously for his work with jazz musicians. The Who pretended to sleep with a Union Jack blanket, propped up against the left bronze relief for a 1968 Life Magazine series on rock musicians. When it first appeared the photo was unpopular with the conservative Life readership.

In 1979, Kane’s photo was re-used as the cover shot on the soundtrack to the documentary Who movie by Jeff Stein, The Kids Are Alright. 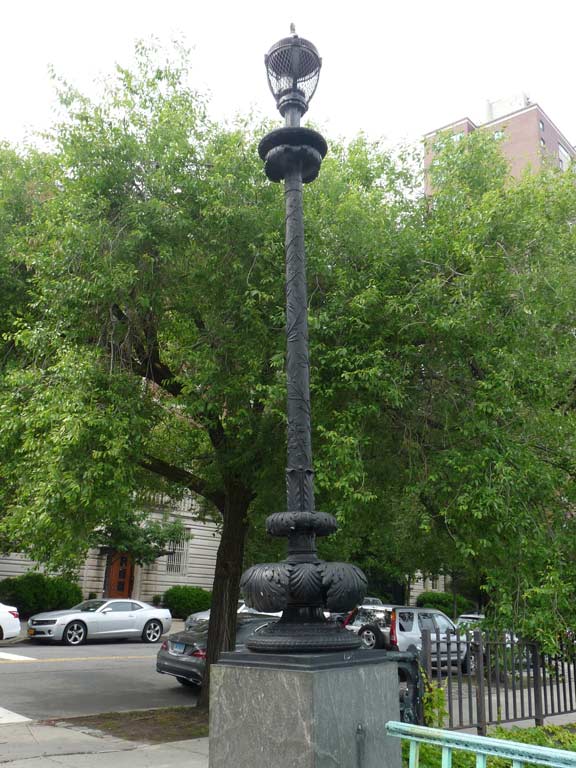 Not sure if the two decorative lamps on each side of the memorial still work. They are the only two surviving of the style in NYC.

Just read a Goldmine interview with Roger Daltrey that said they were not pretending to sleep in that photo: just sitting or lying down during the tail end of that 1968 U.S. tour would make them fall asleep immediately because it was so draining.

At least they didn’t use the monument like the stone column on the cover of Who’s Next.

As Secretary of the Interior, Schurz oversaw the Office of Indian Affairs, which was considered to be the most corrupt in the Interior Department. Although he instituted some reforms, he went along with the policy of “resettling” the Plains Indians tribes onto reservations. His “accomplishment” is not held in high regard in many parts of the West.

Funny you should mention Indian Affairs & corruption.. My daughter was contact by a staffing firm & offered a temp assignment at BIA in Phoenix. It paid $20/hr plus parking. It took over a month to complete the paper work & pass the background check. She had to review & classify paper files dating as far back as 1990! The evening of the 7th working day she got a call from the staffer who informed her that the contract had been canceled. It came as no surprise since the regular federal employees treated the contract employees like enemy invaders. The Deep state strikes gain.

Kevin,
I don’t think that the Piccirilli Stodio produced the U.S. Capitol dome. The dome was completed in 1866. It was made of cast iron by the firm of Janes, Fowler &Kirtland, a South Bronx foundry. The Piccirilli family did not arrive in the U.S. until 1888, well after the dome was completed. They worked mainly in marble and sometimes in limestone or granite. I’m pretty sure they eschewed cast iron.

There is less famous photo of Schurz wrapped in a Prussian flag sleeping in front of a Keith Moon Statue.
Btw George Carlin Way street sign is nearby on 121 Street.