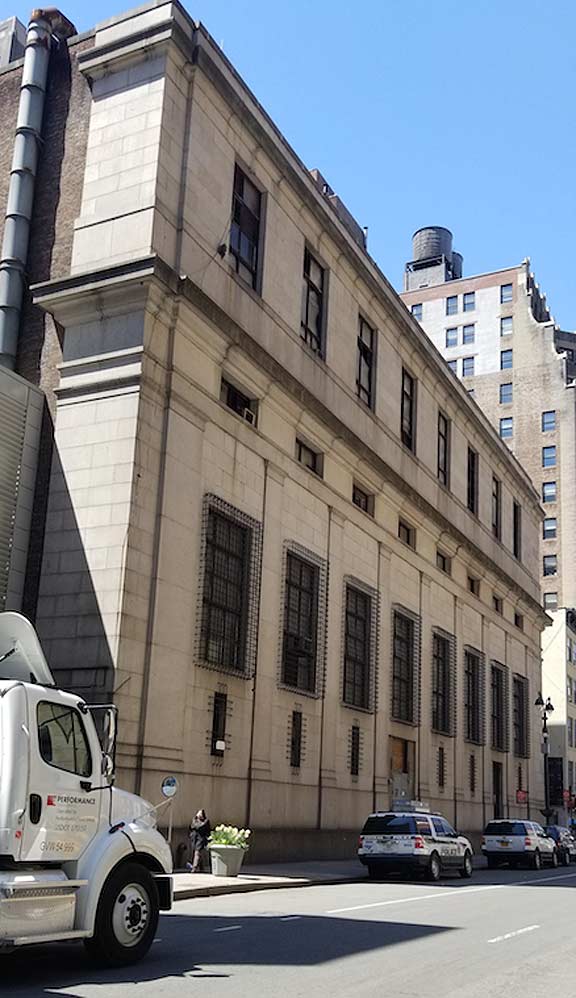 How many of us have walked by this building at 242 W. 31st Street , across from Madison Square Garden, and never gave it a thought? You can include me in that group. This Charles McKim of McKim, Mead & White-designed edifice was of vital importance to the station that took up two complete blocks in midtown Manhattan. As Pennsylvania Station’s service building, it produced electricity, heat, compressed air, refrigeration and elevator hydraulics.  In effect, Pennsylvania Station wouldn’t have been able to operate without it. 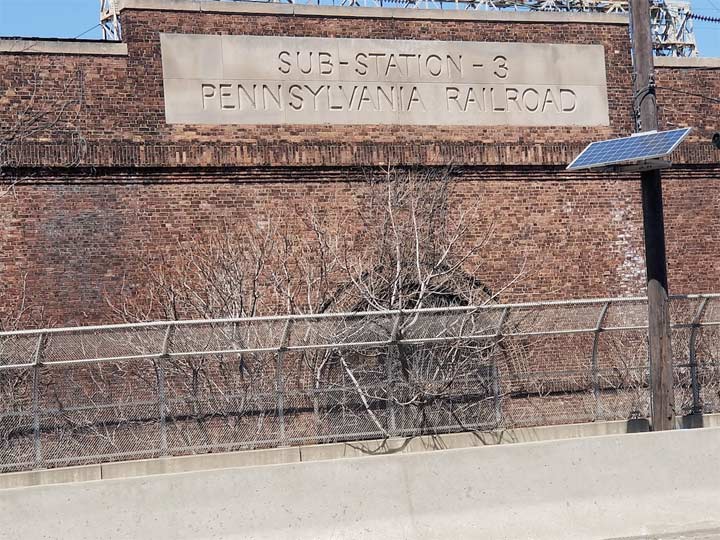 The destruction of the original Pennsylvania Station is still lamented by many, including me.   The upper part of the station has been gone for over fifty years. But thanks to your webmaster Kevin Walsh, many parts of the original station still exist and have been chronicled in FNY.

The Pennsy, as the Pennsylvania Railroad was nicknamed, had a formidable presence in and near NYC. But fifty years after its demise, there are only a FEW places where its moniker can now be seen. Personally, I know of two places where kit can be seen.  One is on a building in City Center, Philadelphia which was the former headquarters for the PRR.
This location on Tonnele Avenue in North Bergen, NJ,  strategically placed at the western end of the Pennsy’s Hudson River Tunnels, was likely some sort of electrical facility.  The building’s sidewalls are clearly visible from Tonnele Avenue.  But it can be seen briefly, and I mean briefly,  on the right side from trains that are NYC bound.  It can be seen  on the train’s left side as it exits the tunnel heading south. From what I can see from Tonnele Avenue, it appears the building is unused.
Please help contribute to a new Forgotten NY website

I’ve ridden past this building at least 6 times this past year and never noticed it. I’m too busy looking to see how many different Police Departments have vehicles parked on both sides of W 31st St.

When the Pennsylvania Railroad built the station in Manhattan they also constructed the massive Sunnyside Yards. As was the custom of that time, they also built their own power generating plant, placing it in Long Island City. Although the structure had long ago ceased in that role, it remained a familiar landmark with it’s four tall steel smoke stacks distinctively in the LIC skyline. Another residential tower now sits in its place.

Ken, the residential tower that is there now is the original building just totally remodeled. And before that, it was a chemical company in the basement & 1st floor and 2 indoor tennis courts where the generators sat. A massive indoor room. But those stacks were always something to see.

The power station building was converted to residential-but minus the stacks.

Hey Jeff B,
This is what’s done at FNY – Chronicling stuff that you may walk or drive by on a constant basis and not know anything about it.

I used to work at 393 7th Ave back in the late 50’s…….I remember that Powerhouse well….also the many places to eat around that neighborhood…..the firehouse around the corner on 31st Street…..the Catholic Church also on 31st……..I could go on an on….Thank you for bringing the Pennsylvania RR up again

A small red sign on the former powerhouse’s door says “Chiller Plant” (at least it did when the GSV car went by). It probably still has something to do with the station’s HVAC system.