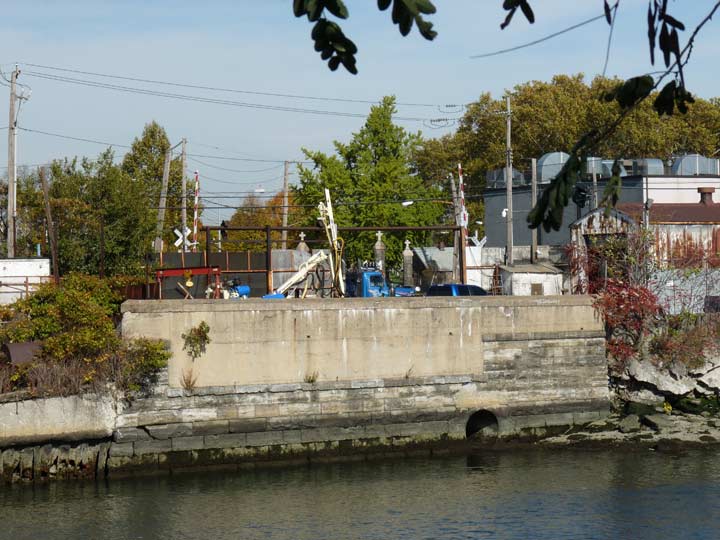 Until March 16, 1998 the LIRR stopped at Penny Bridge…admittedly, only three times daily. Trains had stopped at Penny Bridge since 1878; at one time it had a busy Calvary Cemetery clientele. Stops at Haberman, Maspeth, Fresh Pond, Glendale and Richmond Hill were also abandoned. The smart thing would have been to convert it to a cross-Queens subway line, but locals would have no part of that.

The trains stopped at Laurel Hill Blvd. within sight of Newtown Creek. In its latter days, the Penny Bridge station was nothing more than a clearing along the tracks; even in its salad days, it had merely a shed to protect passengers from the elements.

Through much of the eighteenth, nineteenth and twentieth centuries, Penny Bridge was a toll bridge on the Bushwick & Newtown Turnpike (end of Meeker Ave). In the seventeenth century, it was the location of a ferry between Laurel Hill / Maspeth and Greenpoint / Bushwick. The ferry was started by Humphrey Clay, an associate of Captain Kidd.

The bridge was also the main access to Catholic burials in Calvary Cemetery. The Alsop farm was bought by the church in 1837 when land became scarce for burials in Manhattan. There was a need for the turnpike for the transport of Queens produce to and from Williamsburg ferries as well as the funeral processions to Calvary.

The Penny Bridge that crossed the creek prior to the construction of the great Kosciuszko Bridge was a modest truss bridge that could be moved to allow shipping to pass. It connected the end of Meeker Avenue in Greenpoint with Laurel Hill Boulevard at the south gate of Holy Calvary in Hunters Point. Foot traffic as well as auto traffic was accommodated. In 1939, the immense Kosciuzko replaced it.

Sick transit, Gloria. In 2017, the new K Bridge, a huge cable-stayed bridge that is lit purple at night, replaced the replacement. A companion span is now under construction that will permit foot and bicycle traffic.

All that remains of the original Penny Bridge are the concrete abutments that supported the bridge on both sides of the creek.

The public seems to oppose everything, a subway would’ve been great….just like the public opposed a subway to Staten Island in the 80’s when it was voted upon.

I don’t think the Queens end of the Penny Bridge was situated in Hunters Point. That neighborhood would have had to leapfrog Blissville to make it that far down the creek. My father knew this area to be called Laurel Hill. Whether this was an actual neighborhood, I do not know; but it was certainly not Hunters Point.

Otherwise, this was a highly informative piece.

Your father is correct, IMHO. To the west of this is Blissville, and west of that is Hunters point. In fact the bridge basically sat on the border of the original city of Long island City ( 1st Ward ), and the town of Newtown, (2nd Ward ). To me it’s Laurel Hill or the beginning of Maspeth.

The Kosciuszko Bridge originally had a pedestrian walkway.

Great picture. I remember walking there with my mother in my youth. We would visit my grandfather’s grave at Calvary Cemetery. The pedestrian lanes became history in the 1960’s. Fortunately, the new bridge’s second span will have a pedestrian walkway. Can’t wait.