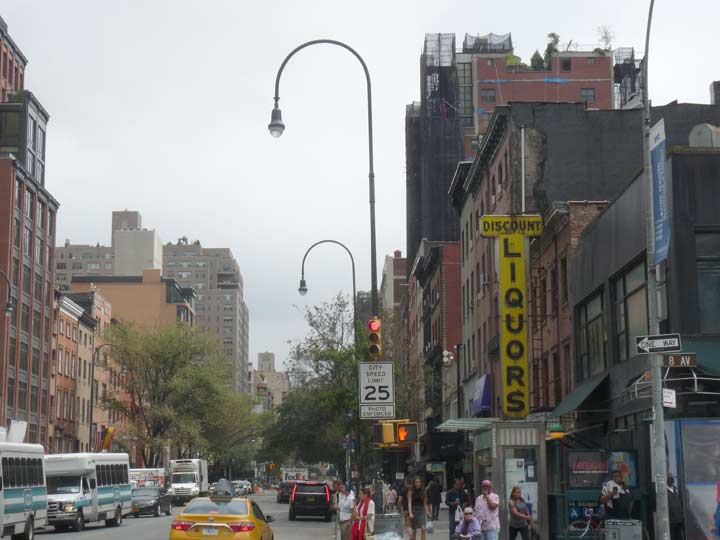 In about 1990, a lamppost design that remains unique in NYC was installed along West 14th Street between University Place and 9th Avenue. The design is among the simplest found in NYC, with an exaggerated curve at the top that echoes the more ornate “Bishop’s Crook” posts that proliferated on NYC’s avenues and side streets beginning in 1915; the Crooks, Corvingtons, and other cast and wrought-iron lamps with extra ornamentation began to be replaced by attrition with octagonal-shafted poles and Donald Deskey-designed slotted posts beginning in 1950.

Around 1990 the Department of Transportation wanted to re-introduce traditional streetlighting forms and came up with straight-shafted poles used on 8th Avenue in Hell’s Kitchen and Flatbush Avenue in downtown Brooklyn… as well as these Crook-echoic “bigloops.”

Soon after, though, companies like Spring City in Pennsylvania began issuing retro versions of the classic lamps, that closely copied the molds used on the original Crooks, Corvingtons and the like, and the DOT began to quickly repopulate streets with brand new versions. Meanwhile, the straight-shafts found purchase in other neighborhoods, but the Bigloops, seen here, are found solely on 14th Street. Recently they received new Bell luminaires with white LED bulbs.

As far as that vintage liquor store sign is concerned (the actual liquor store vanished years ago) VNY reports that the corner of 8th and West 14th seen here is being redeveloped and the sign will likely come down. I hope someone gives it a good home if it does.