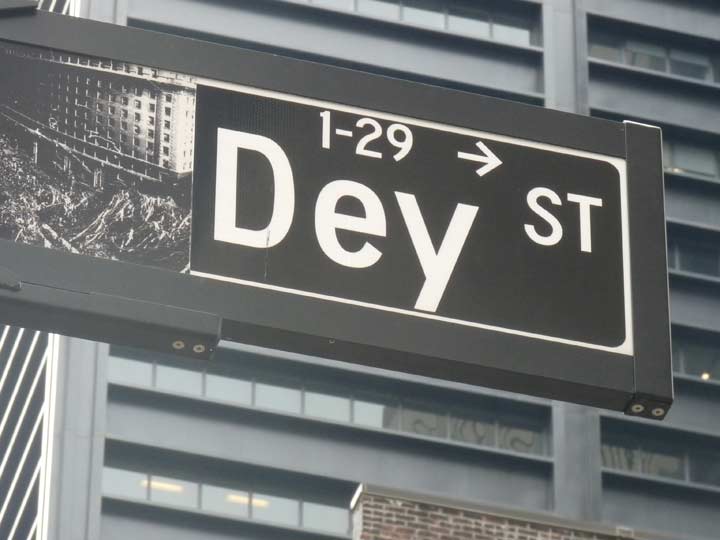 Like its one-block long brother to the south, Cortlandt Street, Dey Street was once much longer, but today runs only for a block, between Broadway and Church Street. It was named for colonial-era Dutch farmer, Dirck Teunis Dey; the road was built through his former property en route to the ferry on West Street. 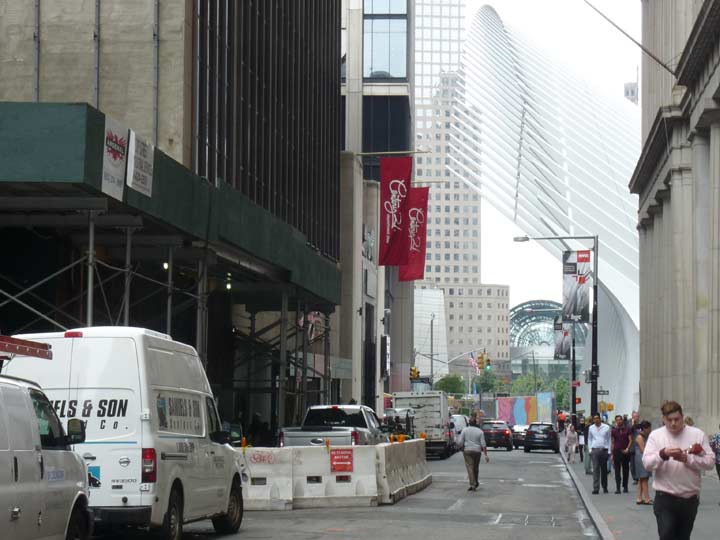 Today, Dey Street has one address (see below); buildings on its south side have been torn down and if any new developments go there, they will presumably get new Dey Street addresses. Today, a look west down Dey Street gives glimpses of the spiky exterior of the new PATH train terminal, referred to as The Oculus, and the glass dome of the World Financial Center, which has a climate-controlled lobby area in which you have been able to find several palm trees for the past few decades. 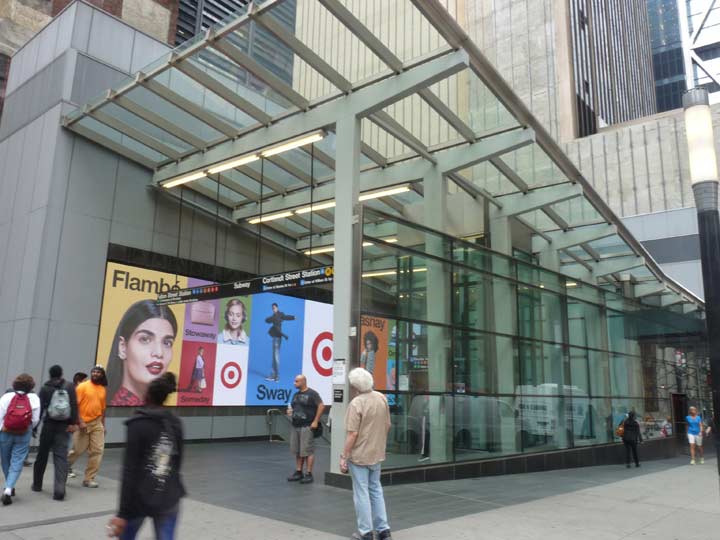 Before the Fulton Street Transit Center (confusingly, its eye-shaped skylight is also called The Oculus) opened in late 2014, the MTA opened this glassy subway entrance at the SW corner of Broadway and Dey about a year before. 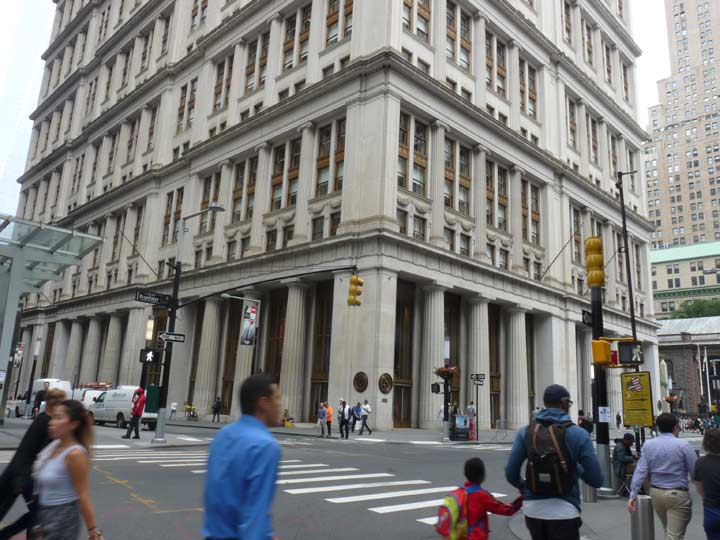 Since 1916, Dey Street’s main signature has been what was originally the Doric-columned, 29-story American Telephone & Telegraph Building at 195 Broadway, also known as 15 Dey. The first trans-Atlantic phone call was placed from this building, as well as the first Picturephone call, both in 1927.

After AT&T moved out in the 1980s, other tenants moved in–including my Forgotten New York (The Book) publisher Harper Collins, which recently relocated here from its longtime HQ at 10 East 53rd Street off 5th Avenue. Nobu, the iconic (and expensive) seafood joint, also relocated here from Tribeca awhile back. 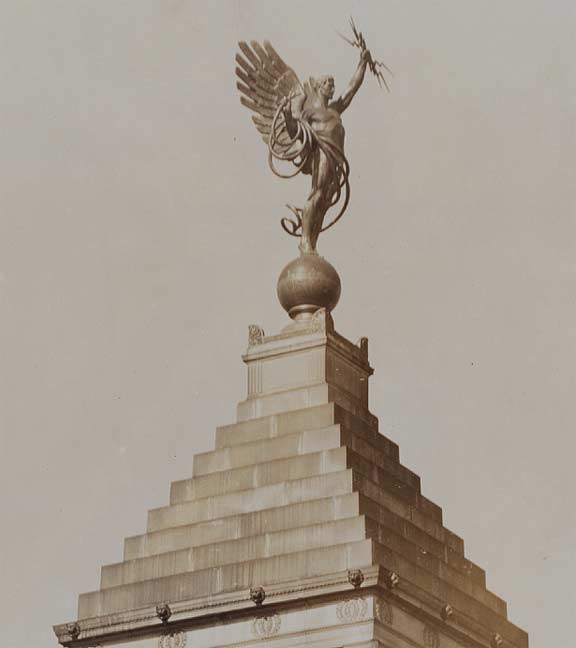 The building is topped off by an Ionic-columned base and pyramid on which stands “Golden Boy,” or officially, the Genius of Telegraphy, a 24-foot tall sculpture by Evelyn Beatrice Longman, depicting a winged youth standing on a globe, holding telegraph cables and electric bolts.

During the summer of 1966 I worked for MABSTOA (Manhattan and Bronx Surface Transit
Operating Authority) on Dey Street.

I believe “Golden Boy” is now in Dallas, TX

Jersey Centrai,Erie,Lackawanna, West Shore Railroads all sent their ferries to the docks around Cortlandt,Dey, Vesey Street at one time…With the Washington Market and Radio Row around there, busy neighborhood……

An image pf that statue was on the front cover of every Queens phone book I can recall seeing as a kid.

After the first WTC bombing in the early ’90s, “Law and Order” ran an episode that had a car bomb go off in the garage of the old AT&T building on Dey Street, literally across the street from the WTC complex. Bet they never run that episode in syndication.

As for that ugly Oculus or whatever the heck they call it, the whole area is now a hot mess, with some of the most atrocious architecture in the entire city. It has the permanence of an erector set, all prefab glass and aluminum. Man, I miss the old WTC.

I wish my family still owned the farm… Dean Dey

Are you related to me. My relatives were NYC Deys and my mother said the street was named for my family. Who knows.

In the 1950s I was a youngster sent by my dad to shop for him at this wonderful Germanesque grocery store on Dey St. called Black & Koenig. Does anyone know any history and ultimate fate of that shop?

My Great Grandmother owned a beauty salon, Dainty Beauty Salon, on 15 Dey street around 1948-1952. I would appreciate any information from that period around Dey Street. Photos would be great.

And here I am, 80 yrs old, perhaps the last person still interested in knowing more of the Ryersons and
Schouten and Dey families who owned the farm .Joris Ryerson who married Anneken Schouten lived more on this land than on his own in Wallabout I am told. Some years back I heard that they were doing construction and found old stones of the original farm homestead. Wish someone had some sketches of the home. Wouldn’t it be something else to still have that property in the family? Still doing genealogy!