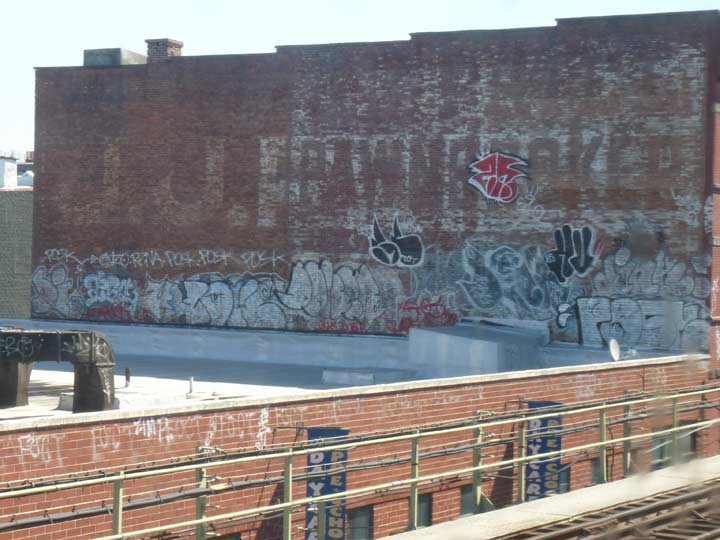 If you are looking out the window of a southbound J train on Broadway in Brooklyn, a number of ancient ads from the early 20th Century or even the late 19th used to show up, at least they did when I first began photographing them for Forgotten NY in the late 1990s. Most have been painted over by now, or the buildings on which they appeared torn down, but this one persists.

Ostensibly it’s a painted ad for a pawnbroker –Broadway was probably chockablock with them at one point–but the pawnbroker ad is painted over another ad beginning with “J.J.” Actually, I know this J.J. It’s J.J. Friel, a loan office that put painted building ads all over town, rivalling Fletcher’s Castoria in sheer coverage. I’ve seen J.J. Friel’s ads in Park Slope and also in Jamaica, for example.

As it turns out, the King of NYC Faded Ads, Frank Jump, researched Friel for his book, Fading Ads of New York City (History Press, Nov 2011):

Joseph John Friel (1853-1914) was an immigrant from County Donegal, Ireland and worked as a ditch digger and then a pawnbroker and loan officer, eventually opening  a number of offices in Greater NYC that were carried on by his children and grandchildren into the 1970s. Read the whole story at Faded Ad Blog.